Buffs win at home against Hawaii

For the first time this season, it was the Colorado defense that saved the offense.

CU won Saturday afternoon against Hawaii, 21-12, despite not scoring a single point in the second half — not to mention committing two turnovers. It was the first time the Buffaloes didn’t give up a touchdown on defense since 2010 against Colorado State.

It wasn’t as if Hawaii didn’t have any chances, either. The Rainbow Warriors entered the redzone four times but only came away with field goals. The most difficult stand for the Buffs came when sophomore quarterback Sefo Liufau threw an interception, which Hawaii returned to the CU six-yard line. The Buffs turned near disaster into triumph after a failed pass and two run attempts by Hawaii.

“We had a guy wide open and then Liufau got hit and they got the pick,” Colorado head football coach Mike MacIntyre said. “We had a guy run him down, no one laid around…and then we made them kick a field goal. That was a huge play in the football game and I was pleased with our effort.”

Junior wide receiver Nelson Spruce had a decent Saturday, too. In fact, he set two records for the Buffs: most catches in a single game (13) and most consecutive games with a touchdown catch (six). His 172 yards weren’t enough to break Paul Richardson’s 284, but I don’t think anyone is complaining.

“I didn’t even realize it until coach told me,” said Spruce about the records. “At the same time, it was a little bittersweet just because in the second half offensively we weren’t putting up any points, which is kind of frustrating, but we got the win.”

“I look forward to watching him break every record there ever was at the University of Colorado over the next two years,” MacIntyre said.

The play of the game was when Liufau hit Spruce on a 71-yard touchdown to give Colorado a 7-3 lead in the first quarter. It looked like Spruce was covered well, but a last-second move gave him some separation.

“The ball got underthrown so I kind of hesitated to slow down to read it, but as I sped up, I was able to pull away with it,” Spruce said.

The tandem of Spruce and Liufau has been fantastic so far this season, but Liufau insists he doesn’t look for him more than any other receiver.

“The progressions are whatever the defense gives me. Spruce just happens to be in those spots and that’s not by design or ‘Hey, we need to get Spruce the ball every time,’” Liufau said.

Going into the third quarter there were positive vibes for Colorado and hopes for the season’s first comfortable victory, but CU wasn’t able to prove that it can put a full game together. The Hawaii defense stifled Liufau after halftime.

“That game could have easily been 28-21,” said Liufau. “You can’t put [offensive struggles] on one thing. It’s a matter of being consistent during the entire game. I have to give a shout-out to the defense for holding them.”

Stopping the run was still a struggle for Colorado as it has been all year. Hawaii running back Steven Lakalaka ran for 123 yards on 19 carries. The secondary had itself a game, though. Senior cornerback Greg Henderson had a sack, forced fumble and fumble recovery all in one play in the first quarter and sophmore defensive back Tedric Thompson sealed the game with an interception late in the fourth quarter. Hawaii couldn’t get anything going in the passing game thanks to Thompson and Henderson’s efforts. Junior cornerback Kenneth Crawley also had some pass deflections.

Hawaii changed quarterbacks several times during the game because of injury and coaching decisions. The Rainbow Warriors’ third-stringer even came in toward the end of the fourth quarter. It didn’t seem to bother the defense.

“It really didn’t make any difference,” Henderson said about the quarterback changes. “[The coaches] let us know. Some of them liked to run more and the other ones liked to throw. We were just seeing who was out there and whoever came out there, we’re going to play our hardest against them.”

Liufau managed to throw for 287 yards, recording two touchdowns and two interceptions. He was 29-45 at the final whistle. That’s nothing to be ashamed of, but if Colorado is going anywhere in the Pac-12, he’ll need to cut down on the turnovers.

“I’d say it was an up and down game on the two picks,” Liufau said. “I wouldn’t say it was the best performance but by no means was my performance today terrible.”

The rest of Colorado’s games this year are in the Pac-12 — arguably the most difficult conference in the country. Starting with California next Saturday, Sept. 27, the Buffs will need to bring the intensity they showed in the first half against the Rainbow Warriors to have any hope of getting some W’s in conference play.

Colorado travels to play California Saturday. Kickoff starts at 2 p.m. mountain time and will be broadcast on the Pac-12 network.

Notes: Senior punter Darragh O’Neill was Colorado’s third leading rusher thanks to a successful fake punt that went for 19 yards in the fourth quarter. Attendance for the game was 39,478; it was Family Weekend. Freshman Shay Fields scored a touchdown in his first rushing attempt for thirteen yards. Other records Spruce broke: most consecutive games with seven receptions (four) and six receptions (five). 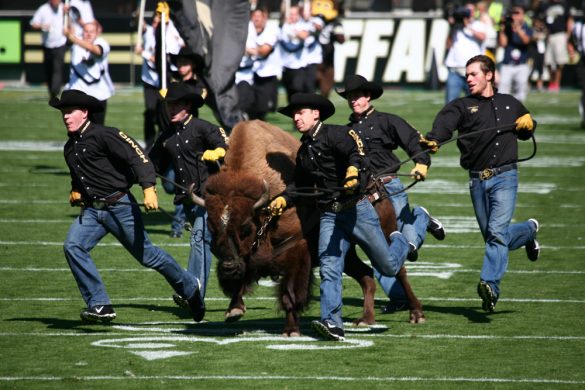 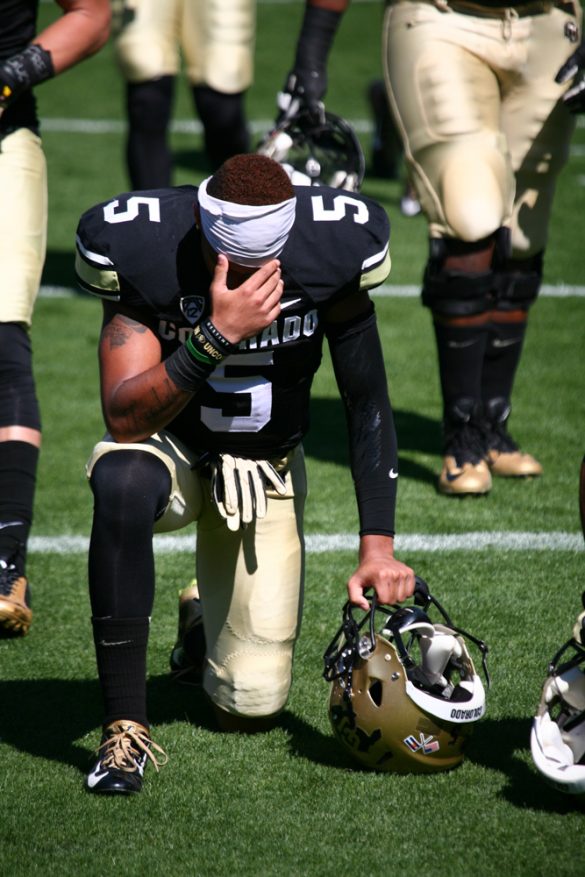 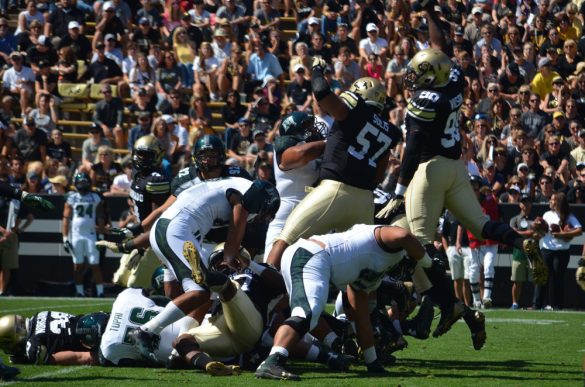 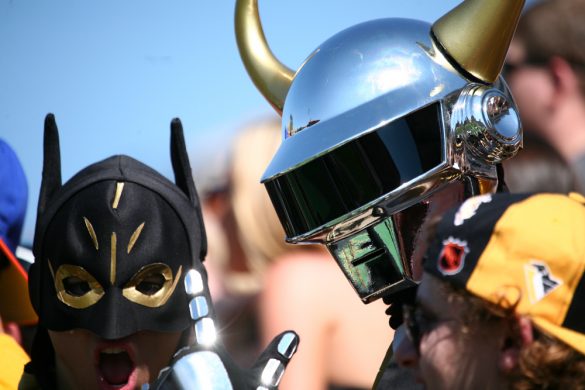 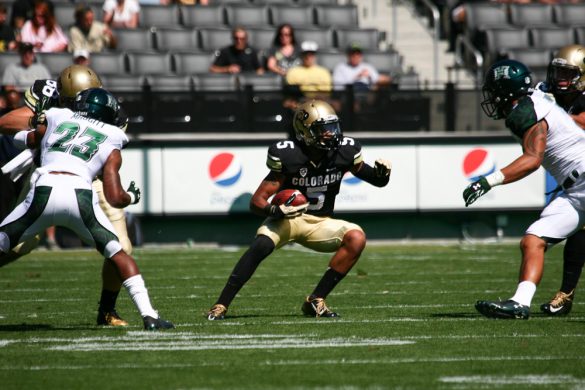 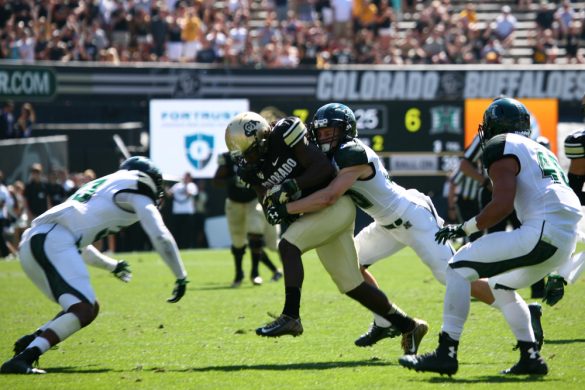 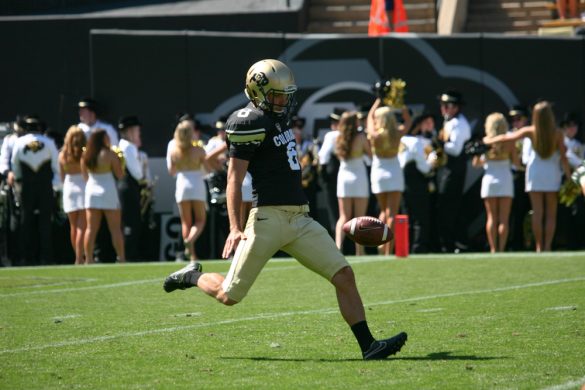 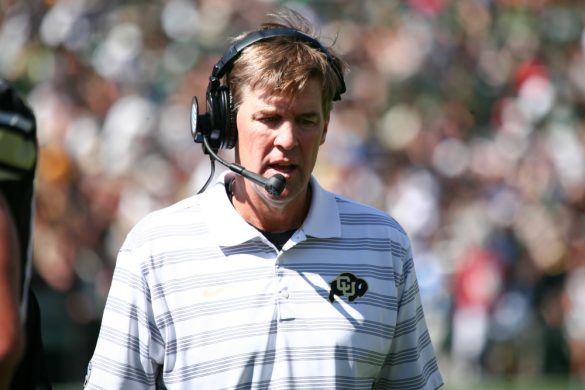 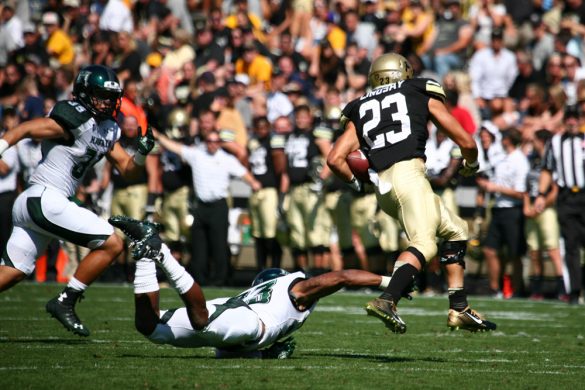 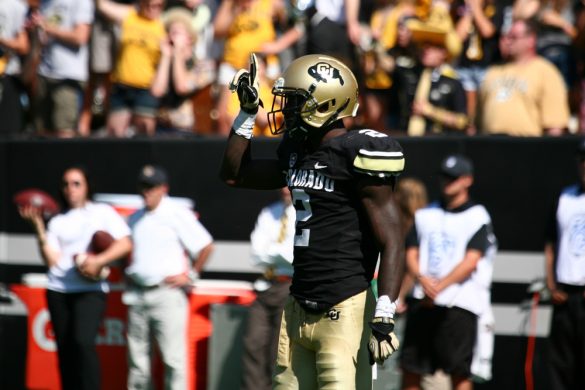 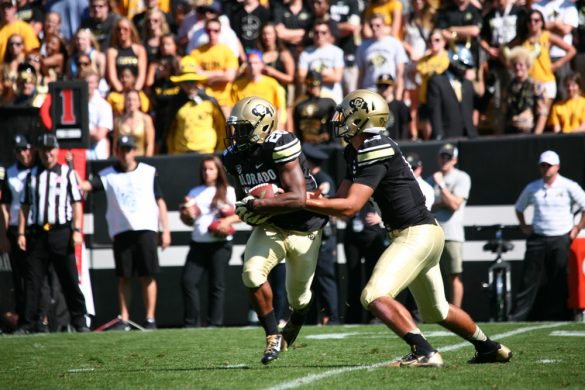 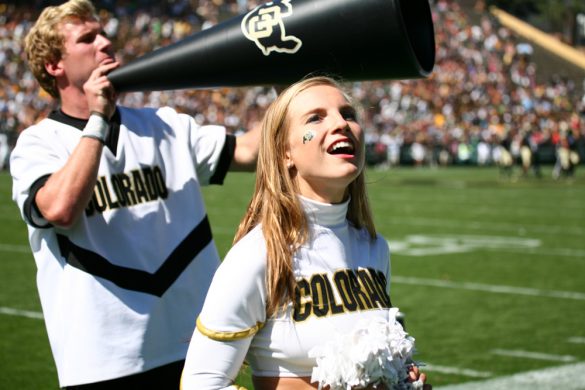 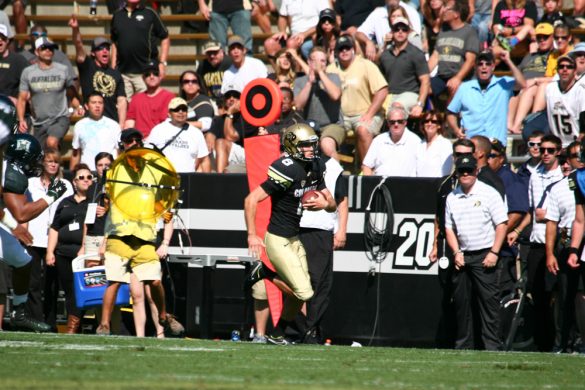 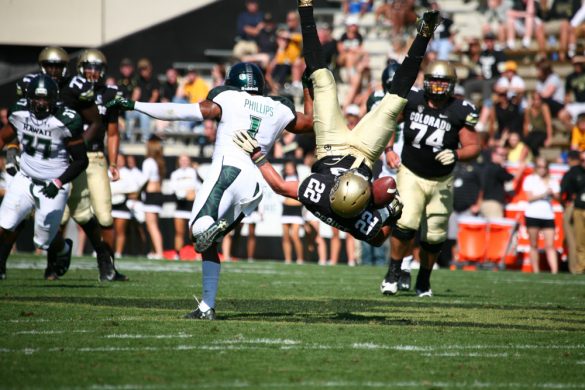 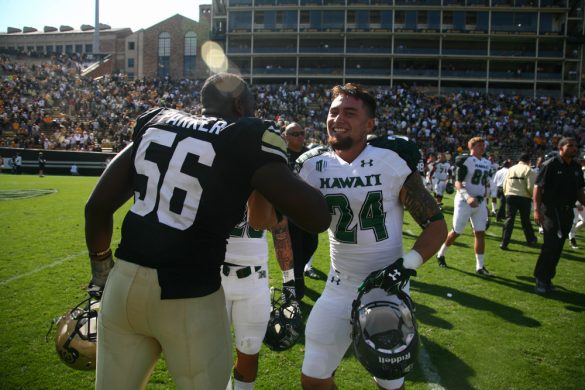 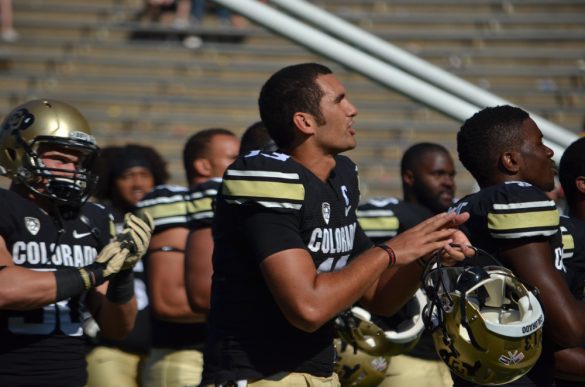 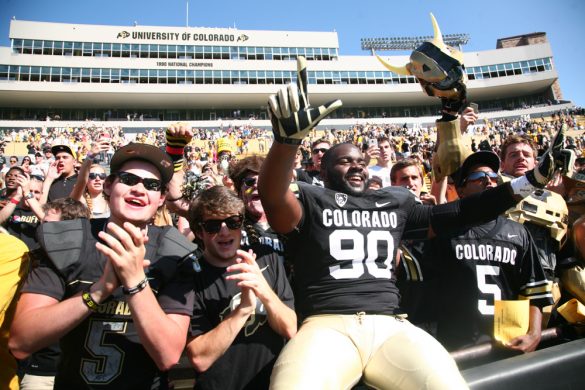 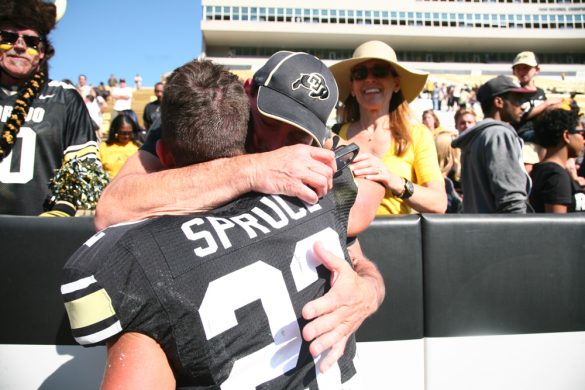