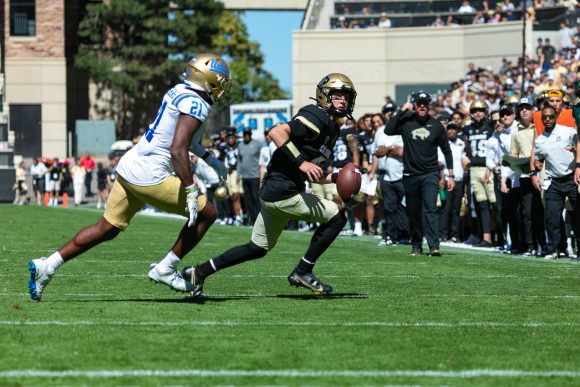 Freshman quarterback Owen McCown scrambles to find an open Buff in the end zone during the first half. McCown had his first career start against the Bruins and scored a touchdown during the second quarter. Sept. 24, 2022. (Io Hartman/CU Independent)

Following a rough 45-17 loss to UCLA, the 0-4 Colorado Buffaloes will continue conference play and make their way to Tucson for a matchup with the University of Arizona Wildcats. The 17.5-point underdog Buffaloes wish to leave Tucson with their first win of the season and prove they should not be ranked as the second worst FBS team in the nation, which is the spot they currently occupy. The Buffs’ defense must step up their game in a huge way and prove they have what it takes to win.

Last week, the Colorado offense took what was seemingly a step forward from what we saw the three weeks prior. Freshman quarterback Owen McCown took the reins and was given his first college start, showing that the Colorado Buffaloes look to have their solution to their quarterback debacle.

“I’d say that [Owen] had an okay, close to solid performance,” said Colorado head coach Karl Dorrell in his presser on Monday. “He took a lot of hits and bounced up from it. I think it was a good performance for a freshman to come in and do what he did.”

McCown passed for 258 yards and a touchdown, which led to the Buffaloes putting up a season-high 17 points last week. These numbers don’t seem miraculous, but they are miles better than what we had seen from Buffs’ quarterbacks in weeks one through three. The Colorado offense now has some newfound stability and something to build upon for the remainder of the season with McCown under center, which means it may be time to shift some focus on the defense and their struggles.

Colorado’s defense has had a lot of trouble keeping their opponents out of the endzone this season. To this point, the Buffaloes’ defense has allowed 173 points in only four games. The 173 points average out to over 43 points per game, which is concerningly high. The Buffaloes also rank last in almost every defensive stat in the Pac-12. It doesn’t matter if rushing yards, total yards, or points are allowed – the CU defense is at the bottom of the table in every category except for passing yards allowed. Colorado’s rushing defense has been one of the biggest struggles so far, as they are currently giving up an average of 467.8 yards per game.

When speaking about the run defense after the game against UCLA, Dorrell said, “Since the TCU game, we had a bunch of other big runs get out where we didn’t even get in front of them. So it’s still plaguing us right now… We did a couple of different defensive schemes for this game. They worked well for the most part, but still, we had some of those rushes that seemed like they were untouched. And that’s not good. It’s just not good. We have to get those things fixed.”

There is some good news for this week’s game, however. Despite a formidable offense, Arizona is ranked second to last in most defensive statistics in the Pac-12, just one spot ahead of CU. The Wildcats depleted defense means that this game has the potential to be close. This week’s game versus Arizona will be one of the Buffaloes’ more winnable games this season.

Arizona, who finished last in the Pac-12 last season and only won a single game, has begun to rebound after their struggles the season prior. They are currently sitting at a 2-2 record, but they are still one of the weaker teams within the conference. If Colorado’s offense can take another step forward and the defense can force some big stops throughout the game to keep Arizona’s offense off the field, CU may stay in the game for all four quarters. This matchup with the Wildcats is a golden opportunity for the Buffs to win their first game, as their schedule will only get more challenging after this week.

Be sure to tune into the Pac-12 Network to see if the Buffs can come away with an upset win when they take on the Arizona Wildcats in Tucson this Saturday at 7:30 p.m. MST at Arizona Stadium.