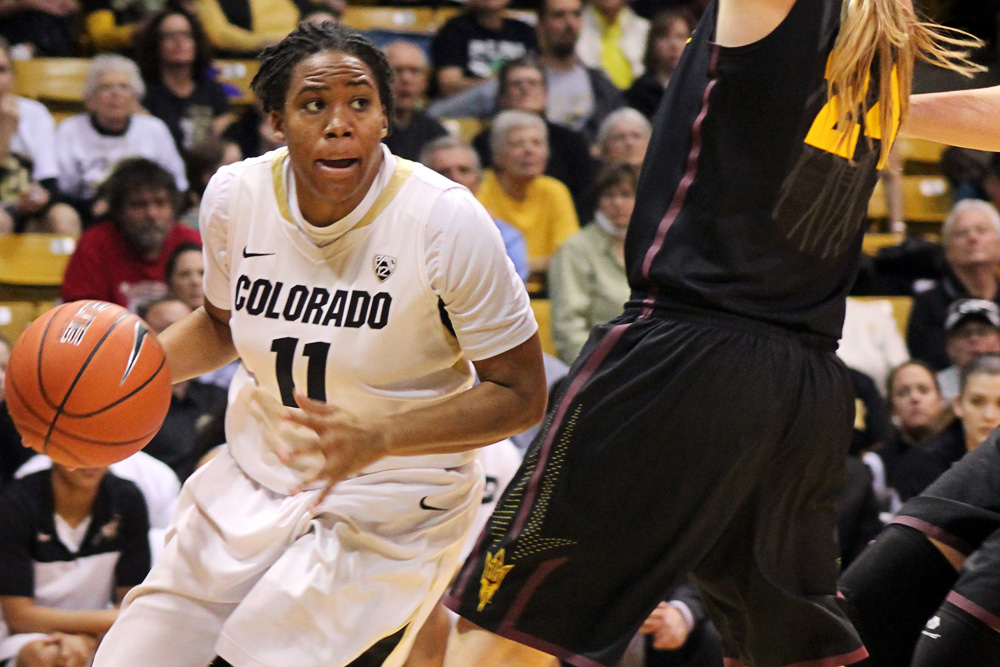 Colorado senior guard Brittany Wilson (11) runs the ball toward the net during the game against Arizona State on Jan. 26 at the Coors Events Center in Boulder, Colo. Wilson scored 12 points of the team’s 66-point game. (Maddie Shumway/CU Independent File)

The University of Colorado women’s basketball team lost to the Oregon State Beavers 75-63 on Saturday afternoon. The Buffaloes (13-9, 3-8) were looking for consecutive wins for the first time since their nine-game winning streak to begin the season.

Nearly two feet of snow in Corvallis forced the game to be postponed from its original Friday night tip-off. Admission to the game was free because of the weather.

Sophomore forward Arielle Roberson led the Buffs with 12 points, though her six missed free throws could have given her more. Senior guard Brittany Wilson and junior forward Jen Reese both added ten points.

Colorado kept it close for most of the game. The Buffs traded leads with the Beavers through the first half, but couldn’t get ahead in the second. Junior guard Lexy Kresl made a layup with 6:50 left in the game to get the Buffs within three points, 55-52. They didn’t get any closer after that.

The Buffs were in foul trouble for the entire game. Four players finished with four fouls and the team had 25 total. This led to the Beavers having a clear edge at the free throw line, especially in the first half when they had 16 attempts to just four for the Buffs. Oregon State shot 21-28, while Colorado went 9-16.

With Oregon State’s starting guard Jamie Wiesner out with an injury, the Beavers needed other players to step up. They got it with four players in double-digit scoring. Freshman guard Sydney Wiese led the Beavers with 20 points.

One bright spot was the Buffs’ three-point defense. Oregon State is one of the best teams in the country beyond the arc, averaging over eight three-pointers per game. The Beavers only managed to make four against Colorado.

The Buffs will travel to Eugene to take on the Oregon Ducks at 6 p.m. on Monday, Feb. 10.