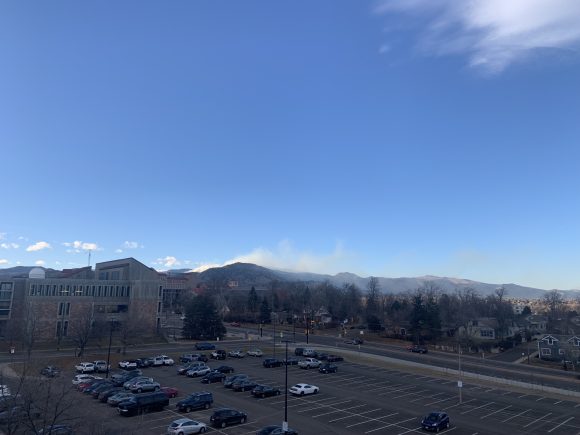 The Boulder County Sheriff’s Office ordered evacuations in parts of mountain communities west of Boulder after officials responded to a structure fire near the 2900 block of Sunshine Canyon Drive. The wildland portion of this fire is named the Sunshine Canyon wildfire.

After firefighting efforts continued throughout the night, Boulder officials estimated the fire is at 100% containment and had “little to no growth” overnight. All road closures and evacuation warnings have been lifted.

The first order was sent out just after 2 p.m. on Monday, Dec. 19, and encompasses some of the Pine Brook Hill and Seven Hills neighborhoods.  The Mount Sanitas trailhead and open space just west of Wonderland Lake were also impacted by this order.

A second evacuation notice, sent out just after 3:30 p.m., showed more evacuations southeast of the original location, with evacuations ordered up to 4th Street and Mapleton Avenue. Pine Brook Hill and Wonderland Lake were removed from the map.

As of Tuesday evening, evacuation orders for the fire have been changed to warnings and residents are allowed to return to their homes, but a soft closure will remain in effect. Individuals may see smoke and small flare-ups of the fire, but should only call 911 if they see the fire moving, according to the Boulder Office of Emergency Management (OEM).

“Due to limited fire spread and improving weather conditions, the evacuation warnings for areas within the city of Boulder have been lifted,” the city’s fire department said in a tweet.

No parts of the city are currently under an evacuation warning. The county still has several active evacuation orders out for areas west of Boulder and in the foothills. 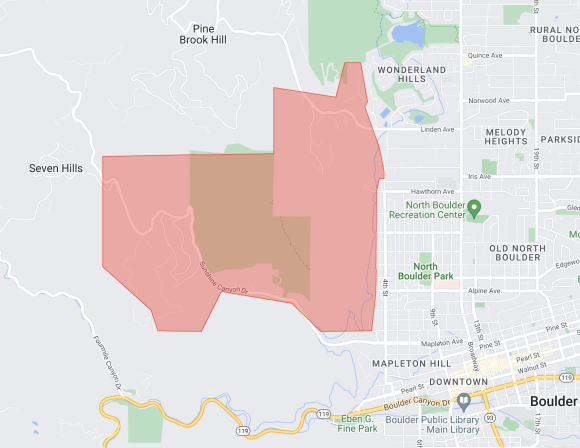 Evacuation orders for the county as of 6 p.m. on Monday, Dec. 19, 2022. (Courtesy of Boulder County Sheriff’s Office and Everbridge)

According to the OEM, an evacuation warning is used to prepare residents to evacuate within the next one to four hours.

The city’s fire department said they were assisting county firefighters in combating the blaze.

According to the department of open space and mountain parks, park rangers are “evacuating visitors from trails on Mount Sanitas.” The department asked anyone hiking the mountain to leave the area immediately.

The county closed both Sunshine Canyon Drive and Linden Avenue at the base of the canyon during their firefighting efforts.

The National Weather Service reported gusts of high wind on Monday, blowing at about 43 miles per hour as of 3:30 p.m.

The East Boulder Community Center, located at 5660 Sioux Drive, opened as the evacuation site for impacted residents at 5:30 p.m. The shelter was open throughout the night to accommodate those in need and closed at 9:30 a.m. Tuesday morning.

On Monday, Boulder OEM tweeted that the Boulder County Fairgrounds opened for large animal evacuation. The Boulder Humane Society will provide food, water, bowls and crates for domestic pets, which are accepted at the evacuation site.

The evacuation orders did not impact the University of Colorado Boulder’s campuses.

A university advisory sent out at 3:48 p.m. on Dec. 19 said “there are no immediate threats to the CU Boulder campus.”

William Oster contributed to this story.