Colorado falls to Grambling State in second game of season 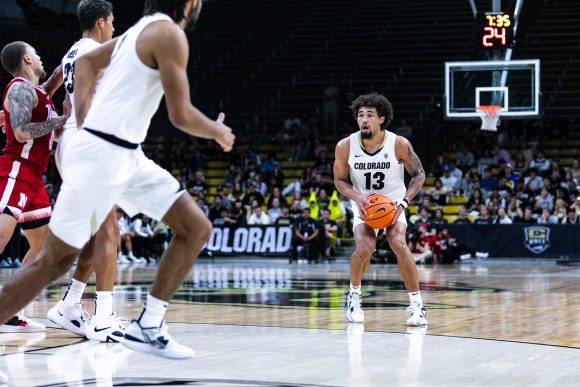 Graduate guard J’Vonne Hadley dribbles the ball up the court during the second half of the home game against Nebraska. Sunday, Oct. 30, 2022. (Io Hartman/CU Independent)

After their opening night win against UC Riverside on Nov. 7, the Colorado men’s basketball team lost their second game of the season, 74-83, to the Grambling State Tigers on Friday, Nov. 11. Following this first loss on the road, the Buffs now fall to 1-1. With a combination of lackluster offense and a shoddy defensive effort, Colorado couldn’t make much of anything work on Friday night.

This weekend, the Buffs traveled down to Louisiana for the first ever Pac-12/SWAC Legacy series, featuring teams from both the Pacific Athletic and Southwestern Athletic Conferences. Though Grambling State was not predicted to be one of the Buffs’ toughest challenges of the season, Colorado struggled for the entire 40-minute game.

With 19 turnovers in the game, Colorado fell behind early and could not rally back, despite attempting a late comeback. They remained down for most of game, only shooting 40% from the field, while Grambling made half of their shots and went 7/17 from three-point range.

“We played like we expected them to roll over and bow down to us,” said Colorado head coach Tad Boyle. “I don’t know what our guys were thinking in that regard, but we weren’t good on either side of the ball tonight. We gave up 50% field goal percentage to defense, and then we turned the ball over 19 times. I don’t care who you’re playing. You’re not beating anybody.”

From the start, Colorado struggled against the pressure of the Tigers, giving up eight turnovers early on and failing to convert easy points. As they searched for a rhythm on offense, the Buffs scrambled to stop Grambling on defense, giving up 46 points in the first half. At one point down by 19, Colorado failed to convert stops into points. With only five assists as a team and shooting 2/10 from three, they were down 46-32 at halftime.

“Grambling was the more aggressive team,” Boyle said. “They played like they wanted to win this game more than we did.”

In the second half, the Buffs repeated the same mistakes: bad shooting and bad defending. Though they scored more points in the second half, Grambling kept a comfortable 10-point lead for most of the game and kept it in their control. Even with late full-court pressure and getting the lead down to seven points, the Buffaloes’ inconsistent shots meant that a comeback remained out of reach.

“We just weren’t ready,” said CU forward Tristan da Silva. “They basically out-competed us for the entire first half. We put ourselves in a tough spot. We let them get rolling, get their confidence up, get their rhythm going. If you play against any team with talent, it will be hard to fight back from being down [19] in the first half.”

Despite the loss, many Buffs team members still played well, with ten players scoring at least once. Sophomore guard K.J. Simpson led the team with 16 points but only shot 5-16 from the field. Junior Nique Clifford, the only Buffalo who had a decent shooting night, scored 15 points on 7-12 shooting and also grabbed six rebounds in the process.

J’Vonne Hadley, the junior transfer from Indian Hills CC, continued to be an asset for this Buffs team, scoring 12 points and collecting eight rebounds for Colorado. Graduate transfer Jalen Gabbidon likewise proved his worth off the bench, leading the CU defense with four steals and 11 points.

With decent individual performances, despite the loss, the Buffs show that any of their players can step up when necessary. With their next game tomorrow, CU will need to take advantage of their strong players and work together as a team more effectively — to put this defeat behind them and focus on the season ahead.

The Colorado men’s basketball team will play their next game of the season against the University of Tennessee Volunteers at the Thompson-Boling Arena in Knoxville. The game will be streamed on ESPN at 12 p.m. MST on Sunday, Nov. 13.