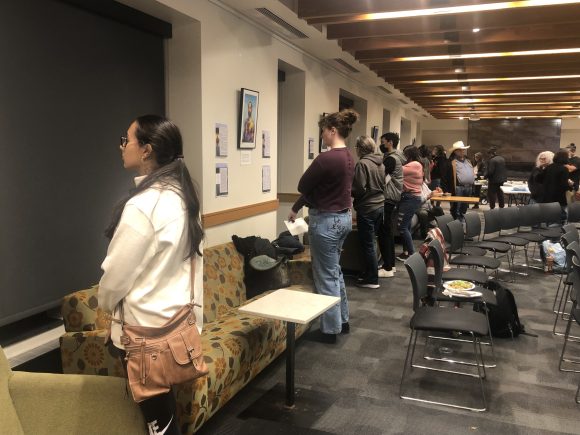 On Saturday, Nov. 5, the University of Colorado Boulder’s Volunteer Resource Center hosted a letter-writing campaign for missing and murdered Indigenous women, girls and two-spirit relatives. It included an educational presentation from Amanda Griffin Linsenmeyer, the interim senior director at CU’s Center for Inclusion and Social Change, and Lila Crank, a senior undergraduate and first-year master’s degree candidate at the university.

According to a recent Urban Indian Health Institute study referenced in the presentation, 94% of Native women surveyed in Seattle said they had been raped or coerced at least once in their lifetimes. The presenters cited another survey by the Sovereign Bodies Institute and the California Rural Indian Health Board that found that 93% of Indigenous LGBTQ and two-spirit respondents had experienced sexual assault.

Two-spirit is a pan-Indian umbrella term for gender non-conforming Indigenous people, according to the Indian Health Service.

“There’s a particular invisibility when two or more oppressions are overlapping and engaging within a person’s identity or identities,” said Crank. “So indigeneity would be one identity that would be considered under subjugation or control, but also, an identity of being a woman or a queer or two-spirit person creates a second level of vulnerability.”

The presenters said this vulnerability translates into a dismal federal response.

“As of 2016, [around] 5,700 Native women and girls were reported missing, but only 116 cases were logged into the federal missing persons database,” Linsenmeyer said.

The presentation also covered certain fears and barriers communities have when turning to the police to report instances of violence or a missing person.

“One of the largest things that we saw was a lack of trust for law enforcement which decreases rates of reporting significantly,” said Crank.

Additionally, the presenters said the typical police response protocol, like a waiting period before declaring a person missing, can discourage people from going to law enforcement.

However, Indigenous communities have worked to combat the lack of resources for families of missing individuals through self-advocacy.

“We share amongst ourselves when our relatives are missing. And sometimes, that can have a really heavy impact. And it also is spreading that word more broadly in ways that our community doesn’t always experience from local, state and national resources,” Linsenmeyer said.

Following the presentation, Crank and Linsenmeyer invited audience members to read the stories of missing Indigenous people posted around the room. They encouraged members to write five letters each to state and local representatives.

Ann Marie Vanderveen is a first-year journalism student at CU Boulder. She is interested in politics and healthcare. Outside of the CU Independent, she enjoys poetry, keeping up to date on current events, and spending time with friends and family.