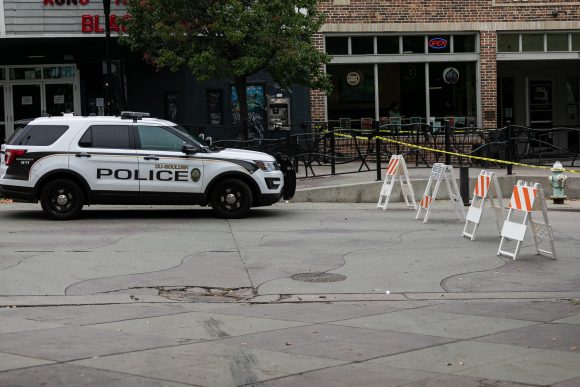 CU Boulder police cars blocked off some of the streets and businesses of the Hill on Oct. 2, 2022. (Io Hartman/CU Independent)

Boulder Police responded to an armed robbery at an apartment complex in the 2900 block of Colorado Avenue shortly before midnight on Friday, Oct. 28.

According to CU Boulder Sophomore Henry Wallace, who was at the scene, the two suspects were at a Halloween party in the apartment complex when they produced a weapon and demanded a partygoer give them his valuables.

After asking for the valuables, the pair attempted to flee the scene. Police are still looking for one suspect, described as a high-school-aged male and about five feet 10 inches in height. Another suspect was initially mentioned in the first alert sent out by police, but was not referred to in the second.

An officer at the scene said no one was injured during the reported robbery. Police asked residents to stay away from the area at the time.

Around 1:20 p.m., officials announced police had “cleared” the scene near 2900 Colorado Ave.