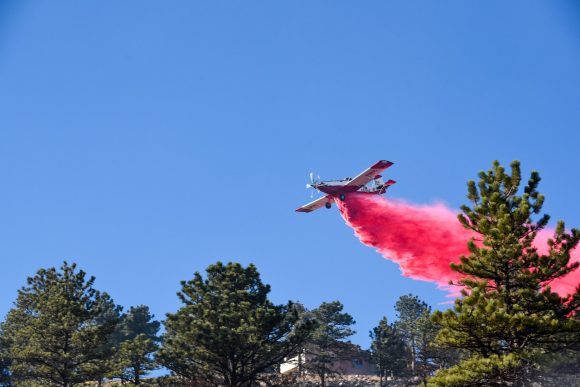 Plane flys over grass fire near Lakeridge Trail in attempt to contain the blaze. (Courtesy of Code 10 Photography and the Boulder County Sheriff’s Office)

The Boulder County Sheriff’s Office responded to a wildfire near the Lakeridge Trail area near North Boulder and warned residents in the immediate area to evacuate.

At 2:23 p.m. on Thursday, Oct. 20, the sheriff’s office said they were responding to a “small grass fire” north of Boulder in a tweet.

Close to 3 p.m., officials said they estimated the fire was between eight and 10 acres in size. Around that time, four homes in the immediate area evacuated out of caution.

Shortly thereafter, the sheriff’s office issued an evacuation warning for the areas of Lakeridge Trail and Nelson Road, encouraging residents who might need extra time to start evacuating immediately.

At 3:38 p.m. the sheriff’s office said firefighters had started to contain the fire, estimated to be 10 acres in size.

Officials closed U.S. 36 between Neva and Nelson roads due to smoke from the fire. Firefighters are asking drivers to use alternate routes.

Officials announced at 4:09 p.m. that they were reopening U.S. 36. Mountain Ridge Drive and Lakeridge Trail remain closed. Shortly after, the sheriff’s office announced they estimate the fire to be 75% contained.

Around 6 p.m., firefighters contained the fire. No structures were harmed by the blaze.

Celia Frazier is studying journalism and Spanish at CU Boulder. She enjoys covering news and environmental issues. When she's not writing, she enjoys hiking, climbing, and watching documentaries. This is her first semester with the CU Independent.