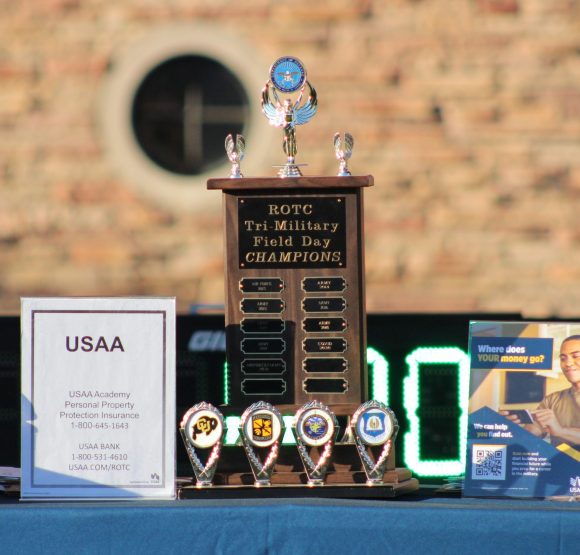 The TriMil trophy displayed on a stand under the Farrand pavilion for the entirety of the event. Oct. 13, 2022. (Malaina Humphreys/CU Independent)

On Oct. 13, the University of Colorado Boulder’s Reserve Officer Training Corps (ROTC) Program held its annual Tri Military Field Day (TriMil) event on Farrand field. The TriMil aims to build a competitive environment between different branches of the military, as well as to foster cooperation within each service.

The ROTC programs dedicate themselves to training college students to become commissioned officers in the uniformed services. Students can apply to the ROTC programs anytime before their junior year of college. ROTC midshipmen and cadets have an expectation to excel academically, remain physically fit and be outstanding among their peers. The rigorous program ensures discipline among the students and prepares them for their careers as officers. Students can earn full-ride scholarships through the program.

ROTC at CU has three separate programs.  The first is the Army ROTC detachment, also known as the Golden Buffalo Battalion. The Army aims to develop leaders of character while preserving a legacy of lifelong service to the community. The Army ROTC has an average of 150 to 200 cadets per year, making the Army one of the larger branches on campus.

The Air Force ROTC detachment has a similar size to the Army. The Air Force program aims develop its cadets into well-rounded citizens and adept leaders ready for the Air Force and the Space Force.

Navy ROTC, or NROTC, is the third program at CU and includes about 130 midshipmen from the Navy and Marine Corps. The national NROTC program is the largest single source of Navy and Marine officers for the military. Colin Hayes, a junior midshipman studying astronomy through the NROTC program, said the program has benefited him.

“The program has helped me build leadership and communication skills,” Hayes said. “It has helped me become more confident in situations and projects that require me to take charge.”

This year, eight teams from four of the six branches competed to win the TriMil trophy. These teams included three from the Army, three from the Air Force and two from the Navy and the Marines Corps. All these teams reside within the ROTC program at CU. The field day competition consists of four events: the relay race, litter carry, tug of war and pugil stick.

TriMil began with the relay race. Relay teams had 10 individuals who competed in physical challenges.  Each team member had to drag a 90-pound sled 50 meters total and then carry two 40-pound water jugs another 50 meters. All eight teams competed at the same time during the race. 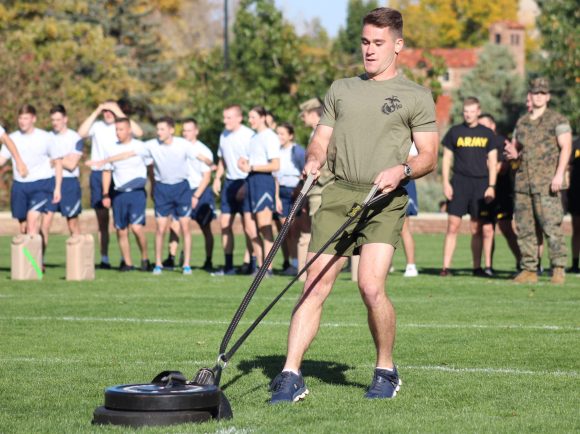 Although a physical challenge, strategy proved important. Teams strategically ordered their competitors to optimize performance. Most teams opted to put their quickest team members first, but the Navy put theirs last. The Navy teams dominated this event, claiming first and second place. Army teams fell to the middle during placement and the Air Force teams finished last. Midshipmen and cadets stood at the end of the field cheering on their respective team.

“Being able to cheer on my teammates was great,” Hayes said. “I loved being able to support them by doing the push-ups with them or running side-by-side with the sleds.”

Immediately after concluding the relay race, teams lined up at the litter carry starting line. The litter carry race relies on endurance. Each team had to race around the field two times carrying a 90-pound sack. Team members could switch at any time, but the sack could never touch the ground. Three teams competed at a time over the course of three rounds. 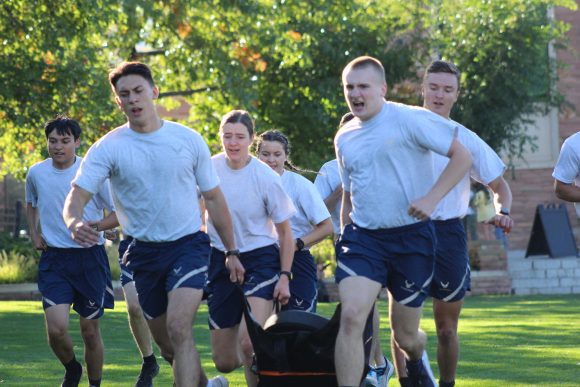 Following the litter carry, officials created randomized brackets for the tug-of-war match-ups. Only nine players from each team could participate in the tug of war at one time. The competition remained back and forth, with each branch claiming victories of its own. Slowly, the Army teams dropped like flies when they competed against NROTC or Air Force teams.  The final match came down to the Navy and Air Force teams. The final match was intense, with the Navy team winning at first. However, Air Force stuck to its strategy of tugging in cadence and slowly took the win. 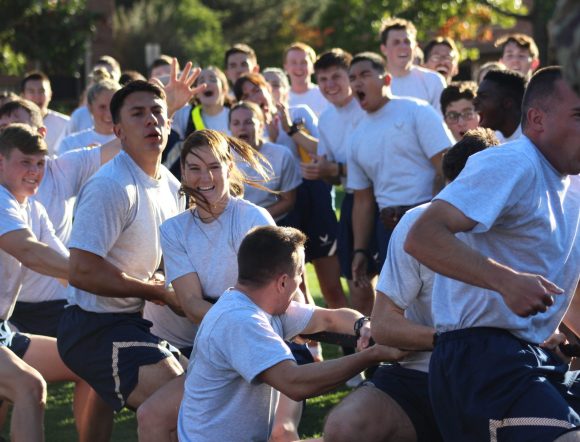 The event closed with the pugil stick match. Two participants from different teams competed at one time. Each participant had to wear protective equipment: a heavily padded helmet and a padded stick. The objective was to knock the other opponent out of the ring or get them to take a knee, which resulted in a point. The person who won two of three bouts won the round. One of the top competitors, Army Cadet Liam McDermott, said he enjoyed this event.

“My favorite event is the pugil stick. I was selected as the sticker this year and honestly, it is really fun to just fight other people,” said McDermott. 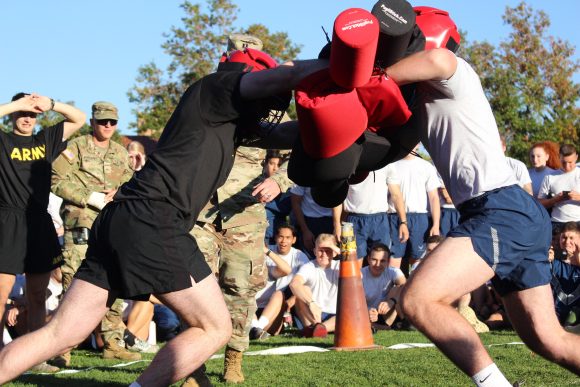 An Army Cadet and Air Force Cadet battle it out during the Pugil Stick Match. Oct. 13, 2022. (Malaina Humphreys/CU Independent)

This last match was an overall very competitive and electric event. Each team rallied behind their teammate and cheered when they defeated their opponent. The final match came down to Air Force and Army. After a grueling fight, Army came out on top.

“It was really fun to beat Air Force. I knew the kid I was fighting so to get the win against him was great,” said McDermott.

After the final event, teams gathered in front of the pavilion while officials added points and debated for nearly 10 minutes. Officials announced the Army won, also the winners of last year’s event. Senior Army Cadet Carter Sussman spoke about what being a part of the winning team meant to him. 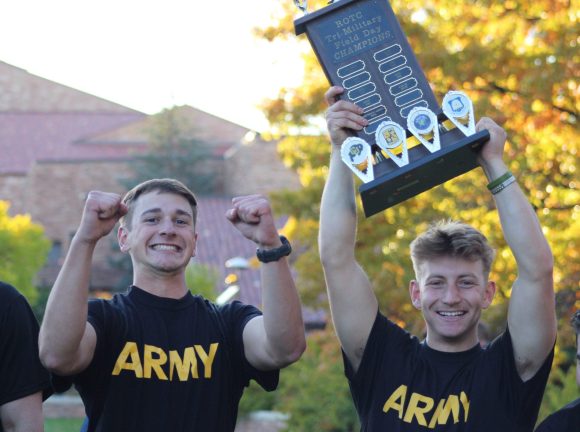 “It feels great,” Sussman said. “I can’t say we are surprised though. We put together an elite team and we did enough training to really pull through the victory. We came out on top like always.”