Perspective: The state of the Herd isn’t looking good at all 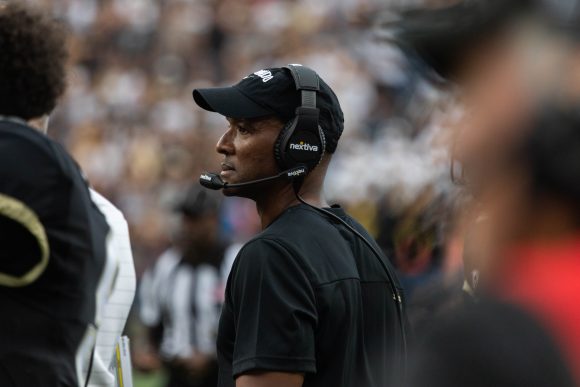 Head coach Karl Dorrell calls a timeout during the fourth quarter in an attempt to draw up a game winning play. Sept. 11, 2021. Kara Wagenknecht/CU Independent)

Are you still paying attention, Buff fans, or has this 0-3 start to the season been enough to turn you away?

Unfortunately, the season is getting dangerously close to, if not already, turning into a runaway train with nothing to slow it down. It’s sad and disappointing to watch, especially since it does not have to be this way. If you look at the numbers, they speak for themselves.

The Colorado Buffaloes’ three opponents have outscored them by 128-30. In those three games, Colorado could only muster 736 yards, which earned them a measly three touchdowns. The Buffs have shown no sign of improving, and most likely will not improve without dramatic on-field or even off-field performance.

The on-field product CU football fans have witnessed over the past three weeks has been abysmal. Turnovers, unexecuted plays, and a visually disconnected team confused about what to do every snap. Despite not wanting to admit the team has a faulty culture, it seems to be the only explanation for a tragic start to the season.

Culture is not the heart and drive of the players, rather it’s made up of the behind-the-scenes management of Colorado Football, which is severely lacking in some areas. These cultural issues go up to Chancellor Philip DiStefano, the athletic director, Rick George, and head coach Karl Dorrell. All three are not devoid of criticism because this school and town deserve much better.

“Karl [Dorrell] shares my passion for Colorado and our vision for winning championships,” said George at Dorrell’s introductory press conference.”

The passion for Colorado has been present, but the results have been significantly nonexistent.

In 2019, George made a splash and hired Mel Tucker to run Colorado’s football program, which worked. While the Buffaloes only went 5-7, Tucker recruited some of the top high school players in the country. Those players were the reason this team made the Alamo Bowl a year later. Tucker left when Michigan State doubled his pay the following offseason, and who can blame him for taking that job? That’s college football.

The fundamental mistake George made was with his next hire, who, according to George, needed to be a Buff in some shape or form.

“It was important that our next coach have CU ties,” said George at the time. “Karl [Dorrell] has those ties, having worked at CU twice previously.”

Needing the coach who followed Tucker to be connected to the CU family is excellent in theory. However, in reality, it shows the university’s higher-ups and, more specifically, George were scared of having another coach bolt after one season.

This timidness screams a lack of organizational culture within the Colorado Football hierarchy. While George’s pick, Karl Dorrell,  might be a very accomplished coach in his own right, he was hired instead of an innovator who would excite everyone involved and not make the team nationally irrelevant. Dorrell’s way of coaching has worked in many places, but in this modern age of football, accomplished is simply not good enough.

Colorado was not the hottest team on the market in 2019, so maybe Steve Sarkisian or any other big-name assistant was not genuinely interested. Still, in many people’s eyes, Picking Dorrell was not a splash like Tucker. Instead, it was a prestigious college football program settling for a coach below their standards.

George needed to follow the Tucker hire with another coach that could bring in top talent, even if that meant that type of coach might leave the program.

Dorrell was a safe hire, and George made the contract punish Dorrell if he chose to leave early for another opportunity. The buyout to fire Dorrell is upwards of $8 million.

Fans know there is no excuse for this type of performance, but will officials show leadership and do something?

Many fans of Colorado Football want to see some accountability for their football team’s current state and what steps will be taken to fix it. The following two games against UCLA and Arizona may be CU’s only chance to show they still have some fight. If the results don’t change, there must be severe consequences because Colorado fans and students deserve much better.