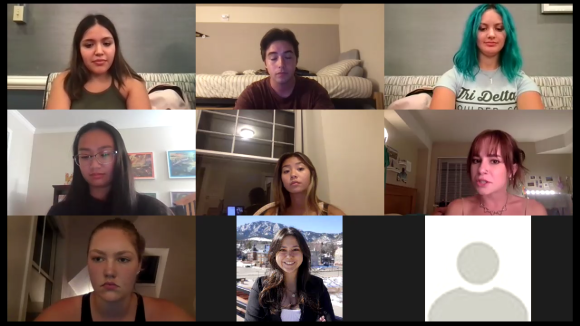 On Thursday evening, the University of Colorado Boulder’s Student Government(CUSG) Legislative Council denied the ratification of sustainability chair candidate Emma Holt, an unusual move sparked by weeks of frustrations and conflict within the organization.

The sustainability chair is an executive staff position that acts as a link between student government, the Environmental Center and environment-focused student organizations. Executive staff are nominated by CUSG’s tri-executives and then confirmed in a series of two votes by the legislative council.

Holt initially received praise from members of student government, like Cooper Conley, legislative council’s director of student engagement, who said Holt stood out from the other candidates for her focus on inclusion in the sustainability realm. 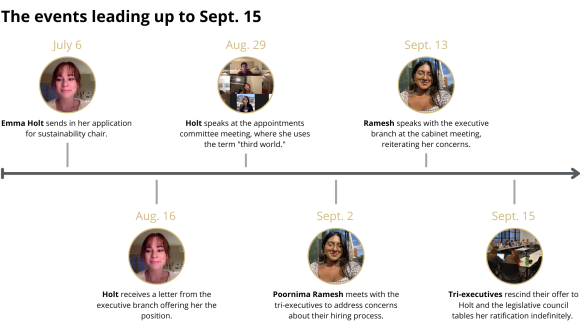 A timeline of Holt’s application leading up to Sept. 15. (Bella Hammond/CU Independent)(Images of Poornima Ramesh courtesy of the University of Colorado Boulder)

Why was CUSG concerned about Holt’s application?

Holt sent her application for sustainability chair on July 6 and received a letter with an offer for the position on Aug. 16 after two interviews. In her application, she uses the term “third world” when referencing a study abroad trip to India that she went on in 2020. Several legislators objected to her use of that phrase.

Some executive staff later said some comments in her speech were “disrespectful.”

Early on in her speech, Holt said, “this land was totally overrun by Indigenous people,” while saying that leaders should listen to and include more Indigenous voices when discussing the environment. Holt said she misspoke here.

“What I meant to say was that Indigenous people own this land, had lived on this land and that they had been overrun by the colonizing people who came here,” said Holt at the legislative council meeting on Thursday, Sept. 15.

Holt again used the term “third world” multiple times while saying developing countries will disproportionately experience the effects of climate change. Holt claims that she did not know this was a derogatory term at the time.

How did student government leaders address their concerns?

The recording of the nomination hearing ends with the appointments committee unanimously voting to allow Holt to be seen by the entire legislative council at their meeting on Sept. 8.

After hearing about the comments made in Holt’s nomination hearing and reviewing Holt’s application, CUSG Election Commissioner Poornima Ramesh scheduled a meeting with the tri-executives on Friday, Sept. 2.

Ramesh and two other Indian members of the executive staff, CUSG Attorney General Nikky Garaga and intern director Jess Rampersaud, met with Tri-Executives Rachel Hill, Lucie Nguyen and Chloe Nicklas to express their concerns about the hiring process. Ramesh said that she and the other members scheduled the meeting to learn more about the decision-making process surrounding Holt’s nomination.

Ramesh said they wanted to know how the tri-executives could “oversee” Holt’s comments and still offer her the position. She said they explained the history of the term “third world” to the tri-executives, who said they didn’t know it was a “problematic” term, according to Ramesh.

“The [tri-executives] were very dismissive and did not take any accountability for their role in this process. Honestly, I kind of left that meeting feeling very unsatisfied with their response,” said Ramesh.

The tri-executives declined several requests for comment, instead asking students to speak with them directly about Holt’s departure from CUSG.

The announcement occurred at the cabinet meeting on Tuesday, Sept. 13. Ramesh once again brought her concerns, this time to the entire executive cabinet. She said she got emotional at this meeting, where she cried and walked out of the room after other legislators discussed separating Holt’s work from Holt as an individual.

By this time, Ramesh had not spoken with Holt to address the comments, saying that her concern was with the hiring process. Holt said she did not know who Ramesh and the other Indian executive staff members were, nor that they were hurt by her words.

Shortly after the cabinet meeting, the tri-executives decided to rescind their offer to Holt. Holt found out about this on the morning of Thursday, Sept. 15. Holt said she was under the impression that she would still be able to be ratified at the legislative council meeting that night with enough votes.

However, this assumption is incorrect. Legislative council bylaws say the council cannot ratify a candidate without an offer from the executives.

“It hurts my heart to know that I hurt people here because that is not what I stand for, and I’m so, so sorry,” Holt said at the public open hearing. “I will continue to educate myself on what needs to be done in order to speak about these manners in an appropriate way.”

Does anything happen next?

“[Holt’s nomination] was no longer something that we were addressing because she was no longer a prospective member of CUSG. The tri-executives pulled back their request for an appointment, and so we could not hear her out,” said Pore.

Holt said that she was frustrated with the result of the council’s decision.

Meanwhile, Ramesh said she was happy with the tri-executives’ decision to rescind their offer to Holt. However, she raised concerns about racial insensitivity within the tri-executives and the executive cabinet. She said that she and the other Indian executive staff members should not have had to go through the effort they had to reach this outcome.

“I’m exhausted, but I’m always going to use my voice because that’s why I’m here,” said Ramesh. “If I don’t defend my people, my heritage and my country, I feel like no one else will.”

Though she was unsure if she would be able to apply again, Holt said that she would if given the opportunity.