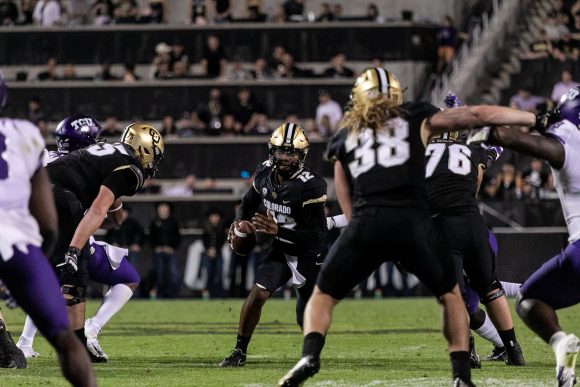 Sophomore quarterback Brendon Lewis takes the ball up the field during the game against Texas Christian University on Friday, Sept. 2, 2022. (Io Hartman/CU Independent)

The University of Colorado Buffaloes will make their way down I-25 to Colorado Springs this Saturday afternoon for a matchup with the Air Force Falcons. Following their 25-point loss to TCU last Friday, head coach Karl Dorrell is looking to bounce back with an upset win against an in-state rival and 17.5-point favorite. Despite this, Dorrell and the coaching staff still seem unclear on how to handle their situation at quarterback.

The Buffs did not play up to their potential last week. The defense had trouble containing TCU’s run game, allowing five separate Horned Frogs to rush for over 40 yards each. CU also had issues establishing their own running game, only rushing for 113 yards on 29 attempts. TCU only had one more rushing attempt and finished the game with over double CU’s rushing total, clocking in at 275 yards.

“The thing we saw evident with the team is that we could have played a lot better,” Dorrell said. “We made some mistakes. There were some coaching mistakes too…We’ve all taken ownership for that and we are ready to move forward.”

Despite the negative aspects of last week’s game, there was one glimmer of hope in sophomore quarterback J.T. Shrout. The transfer quarterback from the University of Tennessee had a promising showing in the first game, passing for 157 yards with an average of 6.8 passing yards per attempt in his limited number of snaps. Those numbers may seem pretty modest, but Shrout split snaps with last year’s starter Brenden Lewis.

In 2021, Lewis averaged just 128 passing yards with an entire game worth of snaps, which Shrout managed to surpass in around half of a game. This output is an excellent sign that the Buffaloes may have found some more stability at the quarterback position and are beginning to get away from their passing woes of last season, where they finished last in the Pac-12 in passing yards by a wide margin.

Many CU fans were impressed by the offensive improvement shown by Buffaloes’ pass unit against TCU, Shrout specifically. Many have called for him to take the snaps at quarterback for the entire game against Air Force. However, Dorrel doesn’t seem to agree.

“[Lewis and Shrout] still need a lot of work,” he said. “They both had issues in the game.”

Like last week, Dorrell has been purposefully vague on his plan at quarterback for this week’s game too. He decided once again not to announce which quarterback will start against Air Force, leaving an air of secrecy around the matter in an attempt to make it harder for the Falcons to game plan against the Buffs’ offense for Saturday’s game. This disappointed many fans anxiously awaiting to see Shrout get his shot to play a full game under center for Colorado.

When asked about his plan at quarterback, Dorrell told reporters, “We do have a plan we talked about and worked through it, but we will not discuss that plan today.”

Despite Dorrell’s reluctance to give out any information about Colorado’s plan at quarterback for this week’s game, he let one tiny bit of information slip out during practice last Wednesday. When speaking to reporters, Dorrell alluded that there is a good possibility that both quarterbacks will split snaps again this week against Air Force. Dorrell’s answer is far from definitive regarding who will quarterback the team this week, but it gives us a little insight into what he may be thinking regarding CU’s game plan.

When the Buffaloes take to the field to try to upset the Air Force on Saturday, Sept. 10 at 1:30 p.m., CU fans can rest easy as their burning questions about this week’s quarterback situation will be answered.