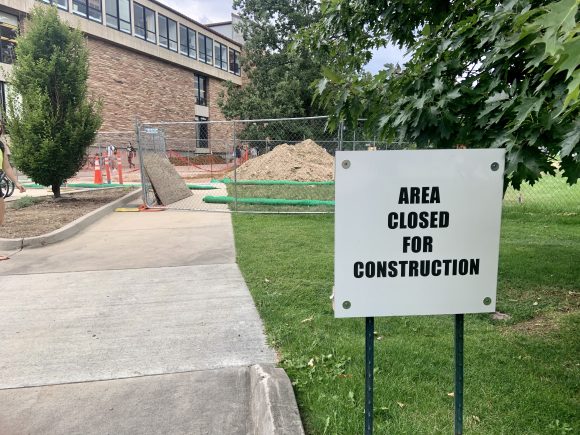 Some sidewalks, like ones on the Norlin Quad, will stay closed for at least four months. Sept. 1, 2022. (Henry Larson/CU Independent)

Community members will see construction in the western part of campus for the remainder of the fall semester as part of a project meant to improve access to cold water in older university buildings, according to University of Colorado Boulder officials. People will probably notice heavy machinery such as specialized cranes during the given timeframe.

Several sidewalks in this area will be closed for at least four months while contractors work on the piping underneath the campus. Certain buildings, such as Hellems, Bruce Curtis and Guggenheim Geography, will be receiving chilled water upgrades. These upgrades will connect them to a central chiller in a utility plant that provides cool water to buildings across campus.

“A chiller in a building may last 20 years,” said Robert Andrew Jordan, project management team lead with Planning Design and Construction in CU Boulder’s Facilities Management department. “[Chilling systems] from the utility plant are hopefully going to last 50 to 75 years, so it [provides] a much longer lifecycle and sustainability for the campus.”

Currently, the sidewalks blocked by construction include: According to Jordan, these upgrades will give the buildings access to cold water, consistent building cooling and humidification control. Some buildings currently have no water chiller, while others have an in-building model that no longer works.

For Hellems, this is just the first of a sweeping set of renovations that the building will see in coming years. The university announced last year that is planning major upgrades to the 100-year-old facility.

While the improvements should be relatively simple to accomplish, Jordan said that one of the biggest complications Facilities Management has taken into consideration is working to ensure campus can operate normally as the work progresses. The department is seeking to minimize the impact of construction on through traffic and other university activities.

“I won’t say that [the upgrades] are difficult,” he said. “They can be challenging because they’re complex. It’s not difficult to do the work; the difficult part is trying to figure out how to do it in this environment.”

Jordan estimated the work should take about six months. Construction impacting sidewalks will take four months, with another two months of work taking place inside of the upgraded buildings. However, he stressed those numbers could change.

“Be aware that even though we said it might take this amount of time to block a sidewalk, sometimes it goes a little longer,” he said.