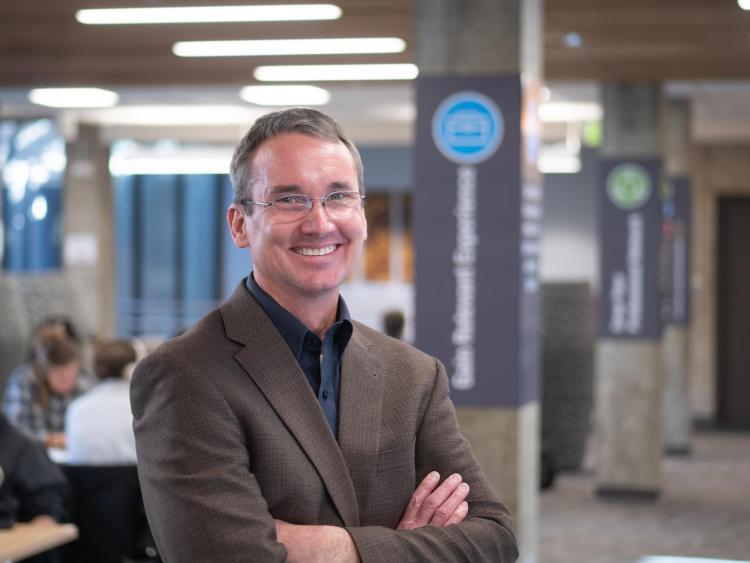 Keith Molenaar stands in a hallway at the College of Engineering and Applied Sciences. (Photo courtesy of University of Colorado)

Dr. Keith Molenaar, the acting dean of the College of Engineering and Applied Sciences (CEAS), has been appointed as official dean of the CEAS by University of Colorado Boulder Provost Russell Moore.

This will mark the first time CEAS has had an official dean since January 2020, when previous Dean Dr. Bobby Braun departed to work at the NASA Jet Propulsion Laboratory’s executive team.

Provost Moore was impressed with Molenaar “on multiple levels,” saying “I was impressed by Keith’s vision for CEAS, which is grounded in values such as diversity, equity, and inclusion, and which is laser-focused on student success.”

After achieving his bachelors in architectural engineering at CU Boulder and later his master’s and doctoral degrees in civil engineering at the same school, Molenaar has quite a history within the engineering department. Many CU Boulder CEAS students will recognize him as the K. Stanton Lewis Professor of Construction Engineering and Management.

Outside of his academic career, Molenaar has worked on many high-profile projects, including the Columbia River and SR520 bridge projects in the Pacific Northwest, the San Francisco-Oakland bridge in California, the Panama Canal expansion project, and the ITER fusion reactor project in Saint-Paul-lès-Durance, France.

“I’m honored to have this opportunity to lead and serve out extraordinary college of engineering,” said Molenaar in a press release.  “We have been galvanized as a cohesive and high effective team through the challenges of the past two years, and our future is now wide open.”