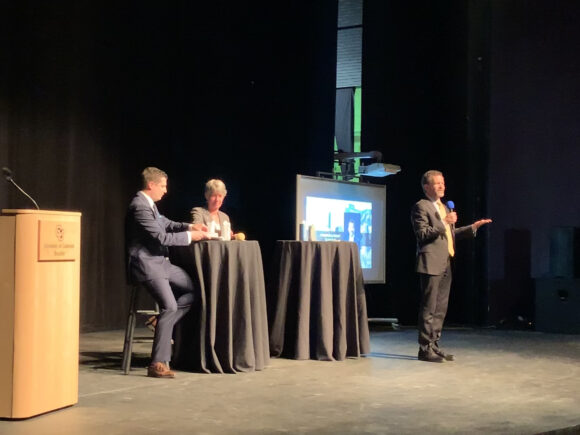 Presidential finalist Todd Saliman and members of the University of Colorado Board of Regents visited CU Boulder on Wednesday, April 20. Several dozen campus community members gathered in the University Theater to hear from the sole finalist and ask him questions.

After former system president Mark Kennedy left the position amidst controversy last year, Saliman was appointed by the board to serve as interim president. At the time, Saliman said that he had no plans to seek a permanent position as president.

The forum, which started at 2 p.m., was one of five that the university system is holding across its campuses throughout the week.

Saliman was joined on stage by Board of Regents Chair Jack Kroll and Regent Lesley Smith, who chaired the presidential search committee. Regent Smith said that the committee was comprised of community stakeholders and they consulted a search firm with a reputation for finding “highly qualified, diverse candidates.”

“Today, the community has a chance to meet the finalist and provide feedback to the board, which we really would like to have,” Smith said.

Regent Kroll praised Saliman for his history in public service and his connections to the university community. He also addressed Saliman’s position as the sole finalist the board announced.

“We asked every candidate we interviewed if they were willing to move forward in a process that would see them become one of multiple public finalists. All but one candidate declined,” Kroll said.

Saliman began his remarks by thanking the regents for choosing him as a finalist.

“I’m so honored and humbled by being selected for the interim (president) role and also to have this incredible opportunity to potentially lead the university into the future,” he said.

Of these five subjects, Saliman spent the most time talking about diversity, equity and inclusion. The search process has drawn criticism for not announcing any women or people of color as finalists for the position.

Saliman answered a variety of questions from audience members, including several from members of United Campus Workers Colorado, a labor union that represents university system employees.

One UCW member expressed concern about increasing inflation rates and asked Saliman what his plan was to help workers through the crisis. Saliman said that the 3% raise that CU gave staff was an important step, but also said it wasn’t enough.

“I come back to…this issue of state funding and needing to work to change the conversation about higher education in Colorado,” he said. “So that we are able to encourage and get support from the people of Colorado to make the investments we need so that we can compensate our faculty and our staff appropriately.”

Later in the Q&A, a CU Boulder undergraduate student asked Saliman what steps he was taking to combat sexual abuse. Saliman said that he was working on providing a more uniform response to sexual abuse across the campuses and ensuring that community members feel comfortable coming forward if they are assaulted was an important issue for him.

“This isn’t theory, this is real, and it tragically impacts way too many people and we need to do everything we can to prevent it. Even one is too many,” Saliman said.

Throughout the rest of the session, Saliman answered additional questions about his support for the CU Boulder South and City of Boulder partnership. He also declined to commit to an enrollment cap for any campus and asked community members to hold him accountable for the promises he’s made.

The Board of Regents will vote on Saliman’s candidacy at the end of the month, after the rest of the public forums have been held.