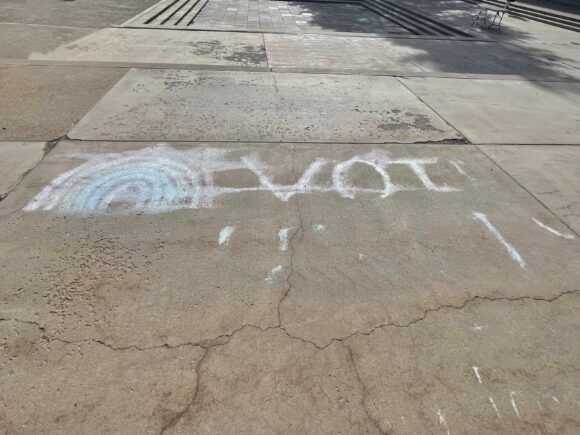 The Inspire and Unity tickets have both been disqualified from the Spring 2022 CU Student Government election, in two separate rulings following the Election Infraction Tribunal late Saturday night.

The tribunal, which was held last Friday, April 15, focused on two cases, one accusing the Inspire ticket of bribery and the other on two counts of voter intimidation. The tribunal was supposed to hear a third case from the Amplify ticket regarding Andrew Harvey’s role in the campaign after his being found ineligible, but it was pulled just before the tribunal began.

In evidence submitted to the court, screenshots show Brehm sending a message on GroupMe saying she’ll give members five “house points” to repost a multi-cultural awareness event from the Inspire ticket on their Instagram story. A second screenshot showed messages from Brehm stating she’d give out house points if sorority members hand out flyers for the Inspire ticket. 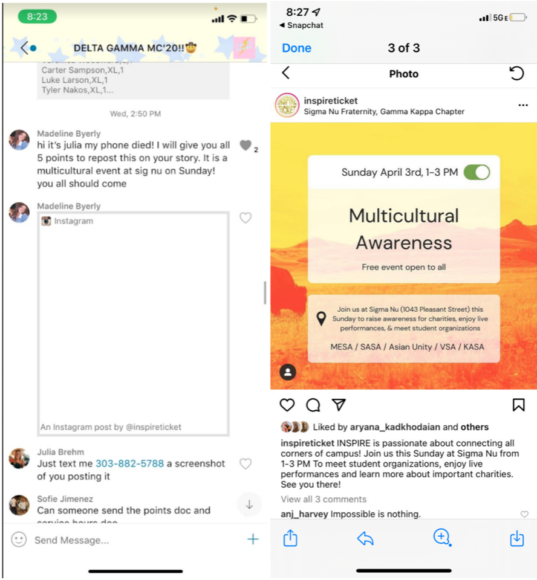 Brehm testified to the Tribunal about her messages, admitting that she did offer members points to both hand out flyers and post about events on their Instagram story.

In a split vote 2-1, with Associate Justice Christy dissenting, the Election Infraction Tribunal found the Inspire ticket guilty of bribery as outlined in section 702 of the Election Code. This ruling constituted a 12-point violation, disqualifying the entirety of the Inspire ticket from the election and nullifying every vote cost for either the tri-executives or representatives-at-large of the ticket during the election.

“The entire Inspire ticket is to be held responsible for the action of Ms. Julia Brehm,” the majority opinion said. “At no time did Ms. Brehm refer specifically to her own candidacy for Representative-at-Large, nor did she refer specifically to the candidate of the Tri-executive candidates or other Representative-at-Large candidates. Ms. Brehm’s messages regarding both the multi-cultural event and handing out fliers referenced ‘Inspire’ collectively.”

In their dissent, Justice Christy highlights the Election Code’s definition of bribery as, “A prize, reward, gift, or favor given or promised in order to influence another to vote for or against a particular candidate or ticket.” Justice Christy stated that, “[There is] insufficient evidence that would suggest influence, and in order for the standard of the preponderance of evidence to apply here, evidence in relation to influence, a critical part of what would warrant a disqualification would need to be provided sufficiently.”

In the second ruling, Chloe Nicklas v. Inspire, the complainant, Chloe Nicklas, submitted a brief on April 9 arguing that the Michael Durr, the campaign manager of the Inspire ticket, engaged in voter intimidation against two pledging members, Riley White and Allen Kosnick, of the Tau Kappa Epsilon (TKE) fraternity, where Durr was a member.

A screenshot of an exchange on Instagram between Durr and TKE Pledge Class President Allen Koncsik was used as an example of voter intimidation, with Durr saying, “You know it’s an election, right?” to a post Koncsik shared on his Instagram story supporting the Unity ticket. 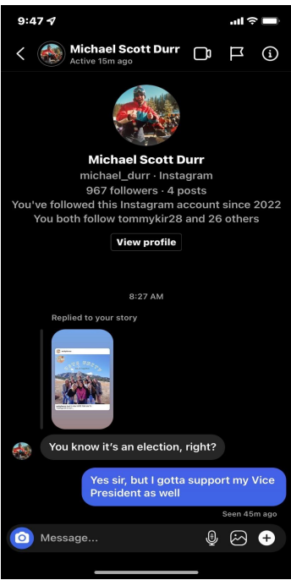 The other instance used as evidence of intimidation was a screenshot of an exchange between Durr and Pledge President Riley White, where Durr sends a script telling people to vote for the Inspire ticket with the message, “You and one of your fellow volunteers are going to text every single person in your red book in your red bookshelf the following text,” followed by another text saying, “Every. Single. One. Except Cooper lmao.” 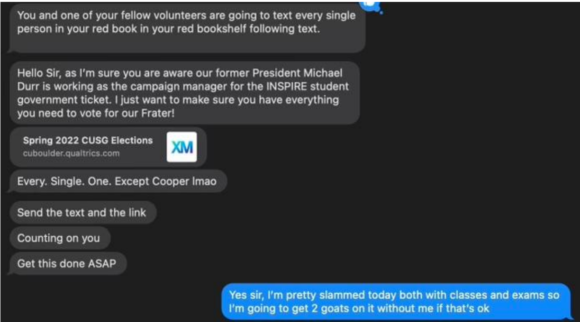 An audio interview between Conley and Koncsik where Koncsik elaborates on his feelings and perspective on the alleged intimidation was also submitted into evidence, but thrown out by the tribunal due to the “leading nature of the interview.”

The tribunal heard this case on April 15 and ruled unanimously 3-0 that the Inspire ticket was not found guilty of violating Chapter 7 of the election code.

“A witnesses’ perceived feeling of being intimidated by an individual is inherently separate from the explicit behavior and endeavor of intimidating an individual to vote for a particular ticket,” the court said in their decision. “The evidentiary support given suggests to the tribunal there is less than a 50% chance that intimidation of voters occurred in this case.”

Before the Tribunal’s completed opinion, however, Justice Gilbert, who presided over the case, received an email from the witnesses expressing the testimony they provided during the tribunal was “very inaccurate” and “very instructed,” referencing communications with the Unity ticket before the tribunal began. This information was immediately sent to the Election Commission and communication with the Unity ticket was immediately cut off “in an effort to insulate all members from potential questions before the Tribunal,” the court said in their opinion.

The Tribunal concluded there was “more likely than not an occurrence of perjury, tampering with evidence or witnesses, or knowingly providing false information, evidence, or testimony to the Election Commission or Appellate Court in a way that substantially affects the outcome or integrity of the electoral judicial process,” the court said. This resulted in an automatic disqualification of the Unity ticket without a separate Tribunal, citing Section 1006 of the Election Code.

The Tribunal believes further investigation is essential in order to determine to what extent witness testimony violated the Election Code, saying, “[We] feel that the provision of due process of law and opportunity for all parties to respond to this charge is procedurally evident in the appeals process outlined in the Election Code, if they wish to seek action.”

Appeals on any of the decisions brought down by the Election Tribunal must be filed before Monday night and sent directly to the Chief Justice of the Appellate Court.

With these two rulings, the Amplify ticket, which received just 9.6% of the vote, retroactively becomes the next tri-executives of CUSG, barring any successful appeals made by the Inspire or Unity tickets.

The CU Independent has reached out to the Inspire, Unity and Amplify tickets for comment.