CUSG election winners could be disqualified after bribery and intimidation tribunal 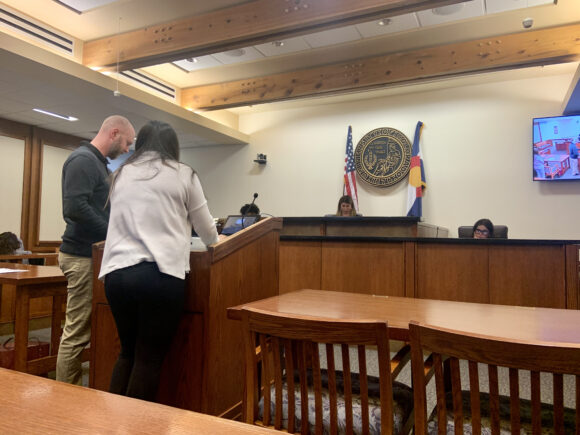 Justices and onlookers prepare for the CUSG election infraction tribunal, which was held in the Wolf Law building. April 15, 2022. (Henry Larson/CU Independent)

In a close election that concluded on April 8, the Inspire ticket narrowly beat out Unity for the tri-executive position. Inspire candidates also won a number of representative-at-large seats on CUSG’s legislative council.

The Election Infraction Tribunal, which was held on Friday, April 15, started around 5 p.m. and lasted until just after 8 p.m. that evening. Justices heard two cases, the first regarding one count of bribery and the other on two counts of voter intimidation.

Initially, the tribunal was supposed to hear a third case, brought by the Amplify ticket against Inspire, but it was pulled before proceedings began.

If the Inspire ticket is found liable for either of the two counts, they could be disqualified from the elections and the votes cast for them in the election would be thrown out. This would mean that the Unity ticket would win the tri-executive spot, which they had lost by just under 100 votes in the election.

Rachel Hill, a Unity tri-executive candidate who represented the ticket at the tribunal, said that even though they stood to gain from a decision that disqualified Inspire, they filed their complaints for the benefit of the student body.

“We actually filed these (complaints) before the voting even ended and we could feel the race was close just by talking to people,” Hill said. “We brought this forward because, in a time where election integrity is often questioned, it’s only fair to students to have free and fair elections.”

The first case that Unity brought to the tribunal was related to several messages sent to sorority members by Delta Gamma sorority executive Julia Brehm. Brehm promised members who attended a multi-cultural event promoted by Inspire, or who handed out the ticket’s flyers, five “house points.”

These points allow members to participate in sorority events, like a Spring Formal. During the tribunal, Unity alleged that rewarding sorority members these points should be considered bribery under the student government’s election code.

The section of the election code that focuses on bribery. (Courtesy of CUSG Election Commission)

“I’ll keep it simple, the code was not violated,” Kassahun said in his opening argument.

The Inspire ticket called Julia Brehm and Miri Frasier, another Delta Gamma executive, as witnesses. They said that they never gave any reward to sorority members who voted for Inspire and that house points were allocated frequently throughout the year.

“Not being able to say no out of fear (is) intimidation,” Hill said in her opening argument.

Inspire, who was represented by Adam Wenzlaff, a former independent interfraternity council president, argued that Durr did not solicit any votes from the pledges, only campaign activity, which meant he did not violate the election code.

The section of the election code that focuses on intimidation. (Courtesy of CUSG Election Commission)

“(The Unity Ticket has) just had their first encounter with electoral politics in the United States. Electoral politics are not for the faint of heart,” Inspire wrote in their case brief before the tribunal.

Unity called two witnesses during the second case, TKE Pledge Class President Riley White and TKE Pledge Class Vice President Allen Koncsik. Both said that they felt they would face repercussions if they did not do as Durr asked because of his standing as a former president of the fraternity.

Inspire called Bradford Rawlings, a former president of TKE, TKE Risk Manager Sam Johnson and TKE New Member Educator Jack Jevens. All testified that no pledges received punishments for not helping Inspire’s campaign efforts and that Durr had no more authority in the fraternity than any other member.

The tribunal’s decision on both cases won’t be announced until 48 hours after its conclusion, when the results will be made public.

If found liable for the first cases of bribery, Inspire will have accumulated 12 infraction “points.” Twelve of these points are enough to disqualify any candidate or ticket from receiving any votes in the election.

Each count of the voter intimidation infraction is worth eight points. If found liable for both, Inspire would acquire 16 points and their candidates would also be disqualified.

“Every decision that individuals of the INSPIRE Ticket made were in good spirit, without any intention of violating the election code,” the campaign said in a statement after the tribunal.

At the end of the evening, Deputy Chief Justice Elizabeth Gilbert, who presided over the two cases, thanked the participants of the tribunal for presenting their cases.

“I’m impressed with the way that everyone’s conducted themselves through what I was thinking would be a pretty intense proceeding, but everyone maintained a good deal of professionalism,” she said.

Editor’s Note: A previous version of this story incorrectly referred to Adam Wenzlaff as the current interfraternity council president. Wenzlaff is a former president of the organization. It has since been corrected.