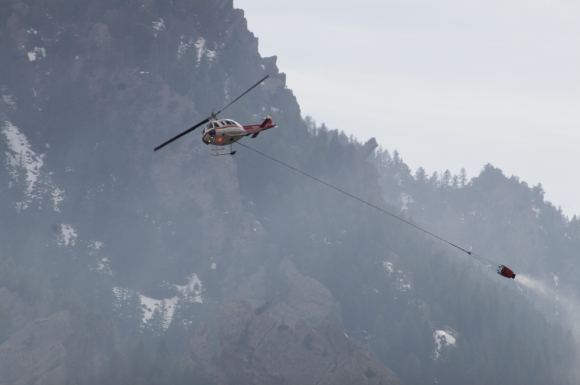 In a media release sent out around 4:30 p.m., the City of Boulder announced that the NCAR fire was 90% contained. More than 50 agencies helped firefighting efforts, which are now transitioning into a “monitoring and recovery” phase of operations.

“In the following days, Boulder Fire-Rescue will continue to patrol and monitor the fire’s area,” the release said. “We will maintain our water hose-line lays in the burn scar while we are monitoring the fire and will remove these lines as appropriate over the next week.”

The city cautioned that residents may still see smoke in the area for the next several days and asked residents to only call 911 if they see something out of the ordinary.

On Tuesday morning, at 10 a.m., officials said that the NCAR fire was now 80% contained. By Monday evening, the fire was only 68% contained. About 150 firefighters helped combat the fire on Monday. That number is lower on Tuesday, with 70 firefighters actively working on the ground.

In a media release sent at 5 p.m. on Sunday, the City of Boulder announced that it was lifting all evacuation orders for residents. Additionally, all road closures, except for the NCAR road closure, have been rescinded.

“While it is now safe to return home, people in the area of the fire should remain vigilant. Fire officials do not anticipate fully extinguishing the fire for several days. It is possible that the city may issue new evacuation orders if conditions deteriorate,” the statement read.

In a statement sent Sunday afternoon, Chancellor Philip DiStefano that the University of Colorado Boulder campus would remain open on Monday and classes would resume as planned after spring break. DiStefano shared that the university will be providing resources to those affected, including students, faculty, staff and community members.

“As we continue to heal from the wounds of December’s Marshall Fire, we are sensitive to the wide-ranging impacts unleashed by these natural disasters,” said DiStefano in a statement. “I ask that as we finish the spring 2022 semester, we all continue to take good care of ourselves, our surroundings and each other with kindness and understanding.”

Additionally, some trails north of Skunk Canyon have been reopened, but trails still in the fire area will remain closed.

Boulder Fire-Rescue Public Information Officer Marya Washburn said that residents should stay off of closed trails so they don’t interfere with firefighting work.

“If those trails are closed by Open Space and Mountain Parks, please honor that they’re closed because firefighters are working on those (trails) on the fire line in that area,” she said.

Officials believe that the NCAR fire has burned 189 acres of land since the fire started on Saturday, March 26.  That number has stayed consistent throughout Sunday. In a press briefing held on Sunday afternoon, officials were cautiously optimistic about their efforts.

Dispatchers first began receiving reports about the fire, which started in Bear Canyon just south of the NCAR Laboratory, around 2 p.m on Saturday. Evacuees clogged city streets and the smell of smoke was pervasive in the air. 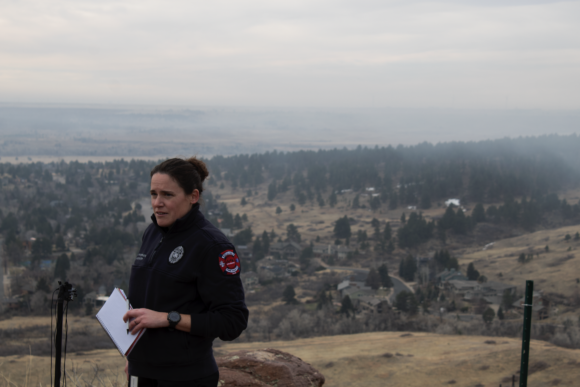 Mike Smith, the incident commander for the Boulder Incident Management Team, said that firefighters believed 35% of the blaze has been contained as of Sunday afternoon. The fire was 21% contained that morning.

“Yesterday, we had a great day as far as our initial attack went. We had over 200 firefighters from over 30 agencies (on the scene),” he said.

The City of Boulder used a new alert system, which they unveiled recently, to let residents know they should evacuate. However, Smith said, that alert went out to more people than they expected at first.

“Because the way (the alert system) works, it actually went a little bit bigger than where we thought it was gonna go. We know there’s a margin of error when we put that out,” he said.

Smith said that the IMT has not heard any reports about missing or injured people. Firefighters had also not lost any structures by Sunday evening. 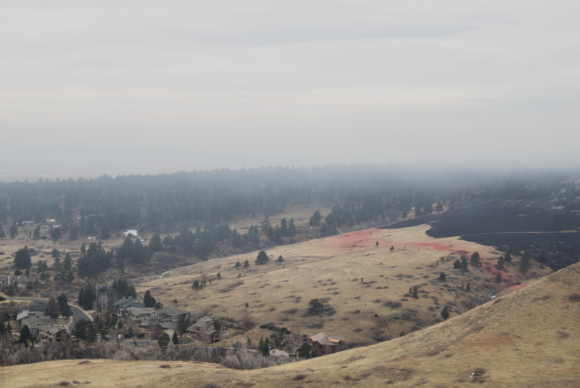 Officials estimate that 150 firefighters and other personnel were on the scene on Sunday. Smith said that they arrived from approximately 30 different agencies around the state.

Sunday morning, an updated forecast for the area showed that winds would be blowing northwest. That’s not what firefighters had hoped for the day. However, according to Smith, the winds worked in the firefighters’ favor later in the day.

“Initially, the forecast was for us to have southwest winds which would have been very favorable,” Smith said. “The forecast for today is actually that we’re going to have northwest winds and west winds, which are a little less favorable, but the wind speeds aren’t that high.”

While firefighters believe that things might be looking up now, Smith said he’s concerned about the future.

“We’re nervous about the season coming up. When you look at the long-term forecasts for the upcoming season, I think this is just a sign of the way things are going to go,” he said.

Those looking for resources from the university can search through CU’s fire resources page.