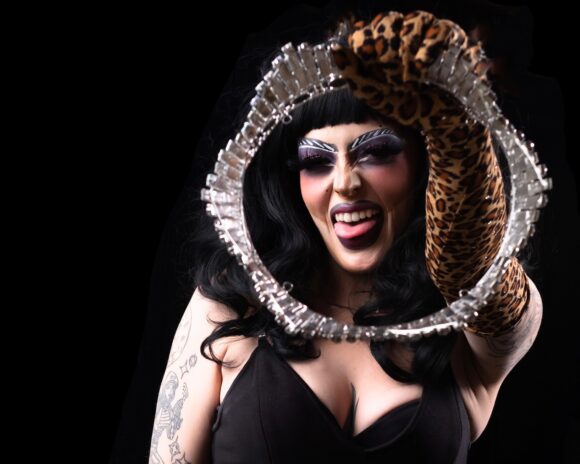 Venus Victrola is a 25-year-old non-binary drag queen who doesn’t like boxes and never has.

In 2020, the Springfield, Mo. local made their way to Boulder to feel more secure in their rights and gender orientation. They are well known for their activism and active role in the Boulder and Denver drag scenes.

“Drag is an inherently queer art form. You don’t think of drag without thinking of queer people,” Victrola said. “So, to perform an art form that was made by (queer people), for queer people, in a queer context of your setting is absolutely liberating.”

Victrola is a unique performer because they sing live in their performances and make their own costumes. They started sewing at age 21 while studying abroad in Paris. The newfound hobby helped them cope with their eating disorder, anxiety and PTSD. Currently, their daytime job is creating costumes for the Boulder Ballet.

Josie Purée, an emerging drag artist in Boulder, Colo. says Victrola is a “truly underestimated soul.” After meeting Victrola at a drag bingo event, Purée was given opportunities to participate in Victrola’s shows. Purée considers Victrola to be a close friend and “like family.”

“Everyone knows that they’re a very big activist,” said Purée. “But really, what I’ve noticed and seen in Venus’s heart throughout my time working with them is (that) they have such an appreciation for new artists. They’re really good at seeing potential in other people.”

Victrola began their drag journey when they were 18 years old and started working as a burlesque dancer. However, they felt that burlesque was too heteronormative and white-centric. At the time, Victrola said they identified as bisexual and faced homophobia from other burlesque performers.

Eventually, they moved to the nightclub Martha’s Vineyard in Springfield, Mo., which hosts drag performances and, according to Victrola, is one of the few gay bars in the area.

“I was like, ‘Oh well, this is clearly what I need to be doing,’” Victrola said. “I’ll just bring my burlesque here and just up the makeup a little bit more.”

Being raised in Springfield, Mo., in the center of the bible belt, Victrola was heavily influenced by their evangelical Christian upbringing.

“I was not allowed to think about my gender,” Victrola said.

When they were 20-years-old, they began breaking down the teachings of their church and school system. Now, they identify most with the neopronouns, fae, faer and femme. This means they are a person with feminine or androgynous aesthetics. Victrola still uses they, them and their pronouns as well.

Victrola has run into people who believe their pronouns are not real. However, they believe making new words is human nature.

“If there’s not the words that are in our vocabulary to describe ourselves, why wouldn’t we not make up new words?” they said.

When Victrola moved to Boulder, they were living in a cooperative house called the Radish Collective. The Radish Collective opened its doors in 1994, with a focus on maintaining a safe space for marginalized people. Victrola and their roommates were attempting to preserve the welcomeness of the home when they ran into trouble with their landlord.

According to Victrola, their landlord claimed to want to make repairs to the home and requested the residents to vacate the property. Two residents of the Radish Collective then reached out to Out Boulder County to gain resources to stay in their home, said Josie Nixon, the former development coordinator for Out Boulder County. Nixon worked with Victrola’s household in trying to find resources.

“There are, at any time, dozens of trans people with housing issues, and suffering from domestic violence, and needing support with going to court, and finding lawyers, and finding healthcare, and finding all these things,” said Nixon.

When the two members from the Radish Collective approached Nixon while they were still working for Out Boulder County, Nixon said that they likely couldn’t help the situation. Because Out Boulder County doesn’t employ anyone with expertise in housing law, Nixon provided the residents’ contacts to the city. Nixon was personally finding these resources and not acting on behalf of the organization by doing this.

Since no one could find adequate resources to save the Radish Collective, the coop was closed and the residents were displaced.

“That was a really, really messed up thing that I advocated for personally,” said Nixon. “I know every single person at Out Boulder County was really disappointed to hear because we have had people in our community live at the Radish since its existence.”

More than a house

For Victrola, the house was more than just where they lived. They saw it as a safe space where anyone was welcome and could explore what the community was like. Recently, one of the main members of the home died by suicide.

“There was a lot that went into it, but I feel like a lot of it had to do with us losing our community space like that,” Victrola said.

Victrola feels that Boulder lacks queer-centered spaces. Though the rainbow flags along Pearl Street are a welcome change for them compared to their conservative upbringing in Missouri, they have begun to see flaws within the town over time. For them, Boulder’s “neoliberal” aspect creates ample opportunities to discuss issues for marginalized people, but action is rarely taken.

However, Victrola has found family within the drag community. Part of why they began performing was to be around like-minded individuals.

“That’s really the only way you survive as a trans person is if you have a strong network of people who understand and respect your pronouns,” Victrola said.

You can see Victrola perform at Trident Booksellers and Cafe on March 12 and April 2.