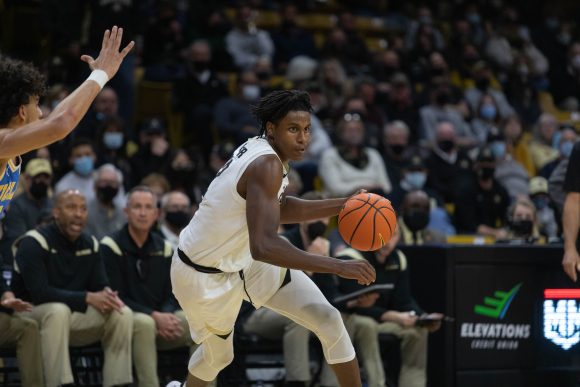 In the quarterfinals of the Pac-12 Tournament in Las Vegas, the Colorado Buffaloes took down the Oregon Ducks 80-69 as this is the first time this season that senior forward Evan Battey and sophomore forward Jabari Walker each recorded a double-double in the same game. After winning eight of their last nine games, head coach Tad Boyle explained how Battey and Walker have led this team so far this season in a postgame interview with Pac-12 Network.

“They’re warriors,” Boyle said. “Those kids have come so far. They believe in each other and they are really special. We fought foul trouble for the most of the night, it started with Nique (Clifford) and then Tristan (da Silva) got four (fouls) early. Jabari played really smart when he got into foul trouble, he’s shown great growth in that area. Evan Battey’s got the heart of a lion, he and Jabari are carrying us right now.”

In the last five minutes of the first half, Colorado allowed Oregon to score just one of their 13 attempted field goals which allowed the Buffs to go on an 18-5 scoring run.

Colorado had a trio of players lead in at least one statistic entering the second half: Battey had 12 points and six rebounds, Walker had seven points and seven rebounds, and freshman guard K.J. Simpson had four points, three rebounds, and four assists. The three impressive Buffaloes combined for over half the team’s points, scoring 50 of the team’s 80 points by the end of the game. Boyle mentioned how his young team is growing and their reward for beating a good team is playing an even better team.

“I’m really proud of them and the growth and maturity that they have shown,” Boyle said. “We beat a really good Oregon team, program and hell of a coach. Now we get Arizona again, so that’s our prize. But (I am) really proud of our guys.”

Although this was an all-around team win for CU, just eight Buffaloes saw the court in this contest. Only five players for Colorado could notch nine or more points, meaning that the majority of CU’s 80 points came from Battey, Walker, Simpson, sophomore forward Tristan da Silva, and sophomore guard Keeshawn Barthelemy. Sophomore guard Nique Clifford, sophomore guard Luke O’Brien, and freshman guard Julian Hammond III combined for only nine points total, whereas the rest of the Buffs were spectators.

After tallying 19 points in this meeting, Battey currently sits at No. 21 on Colorado’s all-time scoring list with 1,283 points. He needs just nine more points to surpass former Buffalo and current New York Knicks guard Alec Burks to break into the top 20 of the all-time scoring list. Battey discussed his mindset during his final few games as a Buff in a postgame interview with Pac-12 Network.

“I just want to have no regrets,” Battey said. “I want to leave it all on the floor. Every time I step on the floor I am thankful for my brothers, my teammates, my coaches, my managers, everybody.”

Colorado’s defense carried their first-half efforts into the second half, considering CU allowed only six points in the last four minutes of the game and zero points in the final two minutes. Although Oregon recorded more blocks (7-4) than Colorado, the Buffs out-numbered the Ducks in rebounds (55-42), steals (7-5), assists (17-13), and shooting percentage (40.5-34.3). Oregon also committed more turnovers (9-8) and more fouls (18-16) than Colorado.

As Simpson is slowly beginning to earn more minutes, the freshman’s highlight-worthy plays are starting to become expected in each game. After Simpson led the Buffs in assists with six, Battey noted how much Simpson has improved as a freshman this year.

“He’s really talented,” Battey said. “He’s unbelievably talented. I saw it at the beginning of the year, he’s worked so hard and comes such a long way so I’m really proud of him.”

The Colorado Buffaloes enter the semifinals of the Pac-12 tournament facing the No. 2 nationally-ranked and No. 1 conference seed Arizona Wildcats in a highly-anticipated rematch on Friday, March 10 at 6:30 p.m. MST. The Wildcats will look for revenge after being taken down by CU back in February, but it is highly possible that sophomore guard Kerr Kriisa will not be able to play for Arizona due to an apparent ankle injury from the Wildcat’s quarterfinals game against Stanford.