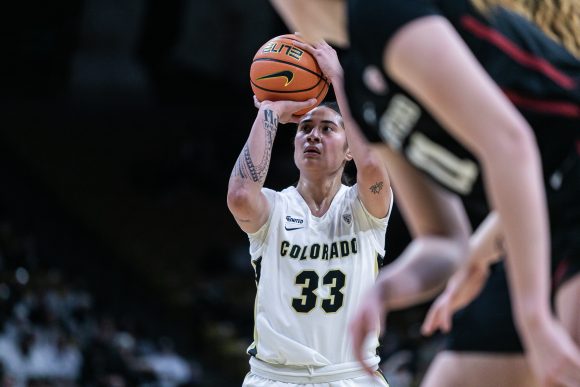 Peanut Tuitele (33) shoots the ball during a free throw at the game against Stanford on Friday, Jan. 14th, 2022. (Io Hartman/CU Independent)

The Buffs survived the first round of the Pac-12 Women’s Basketball tournament with a 64-52 win over the Washington Huskies Wednesday afternoon. A lackluster first half led to an explosive second, creating a close game heading into the fourth quarter.

Colorado shot just 25 percent in the first half, which resulted in a low-scoring game. The Buffs led just 21-17 over the Huskies going into halftime, and it wasn’t the first time this season CU shot under 30 percent from the field. Colorado scored 24 points in the fourth quarter alone, which pulled them away for good.

Senior forward Peanut Tuitele led the Buffs through game one of the tournament as she led the team with 16 points, her season high, in addition to her eight rebounds. Fifth-year senior forward Mya Hollingshed fell just behind with 15, but dominated in rebounds with 12. Junior center Quay Miller came in third with nine points off the bench and seven rebounds.

“[I’m] really proud of our ball club tonight,” said head coach JR Payne. “We knew that it wouldn’t be the prettiest game. Going in we knew that and expected that. Just a lot of jitters and post-season play and all of those things. But I’m unbelievably proud of our resiliency and how we were able to really stick together and find a way to win the basketball game.”

This was a revenge game for a couple of Buffs as Quay Miller transferred to the Buffs last offseason from Washington, in addition to sophomore guard Tameiya Sadler as well. Unfortunately, Sadler crashed into fellow teammate Peanut Tuitele on the court late in the fourth quarter and was removed from the game via stretcher. She scored seven points before she was forced to exit and held at a local hospital overnight.

The Buffs move on quickly to face Arizona at 1:00 p.m. MST on Thursday in an attempt to move on to the next round of semifinals.