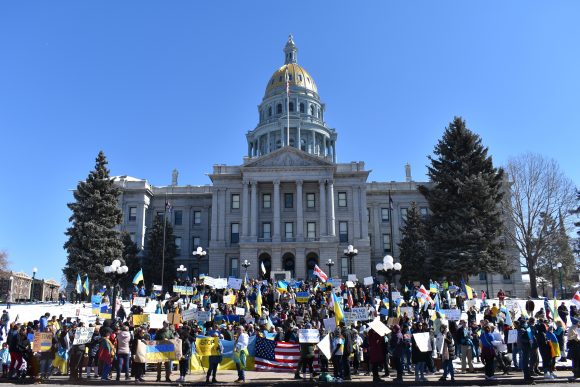 Scores of ralliers stand together outside of the Colorado State Capitol building, Feb. 26. (Isabella Hammond/CU Independent)

Ukrainians rallied outside the Colorado State Capitol on Saturday while Russian forces pushed forward in an attempt to capture the country’s capital, Kyiv.

People gathered on the front steps of the Capitol and in the snow, wearing Ukrainian flags on their shoulders. Many carried signs showing slogans such as “Stop the War!” and “Glory to Ukraine!”

“This is the biggest military operation in Europe happening, and Ukraine is on its own,” said Repula. 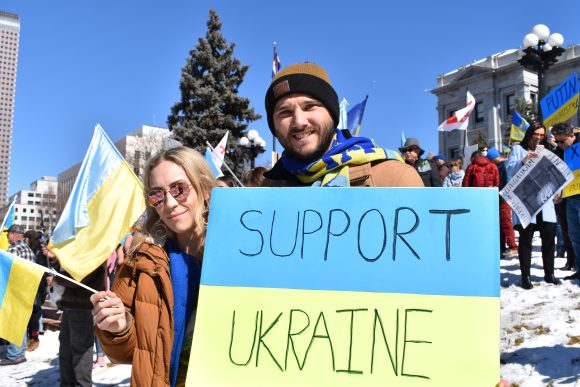 Gov. Jared Polis signed an executive order on Thursday directing the Office of Information Technology and the Department of Personnel & Administration to ensure that Colorado has no investments with Russian companies. Shortly after, Polis wrote a letter to Secretary Antony J. Blinken of the US Department of State on Friday declaring Colorado’s support of Ukraine and its refugees.

“Colorado will not turn its head,” Polis said in the letter. “We will take affirmative actions to support Ukrainians and hold Russia accountable.”

Also, on Thursday, President Joe Biden authorized economic sanctions on Russia that maximized impact on Russia and minimized impact on the United States. Biden maintained a message of hope in an address from the White House and said that “America stands up to bullies. We stand up for freedom. This is who we are.”

On top of the sanctions, Biden sent thousands of troops to Europe, including Poland and Germany. The forces aim to reassure NATO allies near Russian aggression.

Despite this action, many people held signs calling for direct American and NATO involvement. Some asked that the United States send troops or weapons to Ukraine. Others just wished to display support for Ukraine against the war.

“It’s not easy to fight one of the biggest armies in the world alone,” said Cherpak, carrying a Ukrainian flag signed with the names of his friends who are in Ukraine now. “We are here hoping that the world will hear us and help Ukraine.”

The rally unified many participants, as people sang songs in Ukrainian, gave speeches calling for international involvement, and cheered as honking cars passed by.

“Ukraine is protecting all these western values on its own, so it’s of interest of the whole western world to protect western civilization,” said Repula. 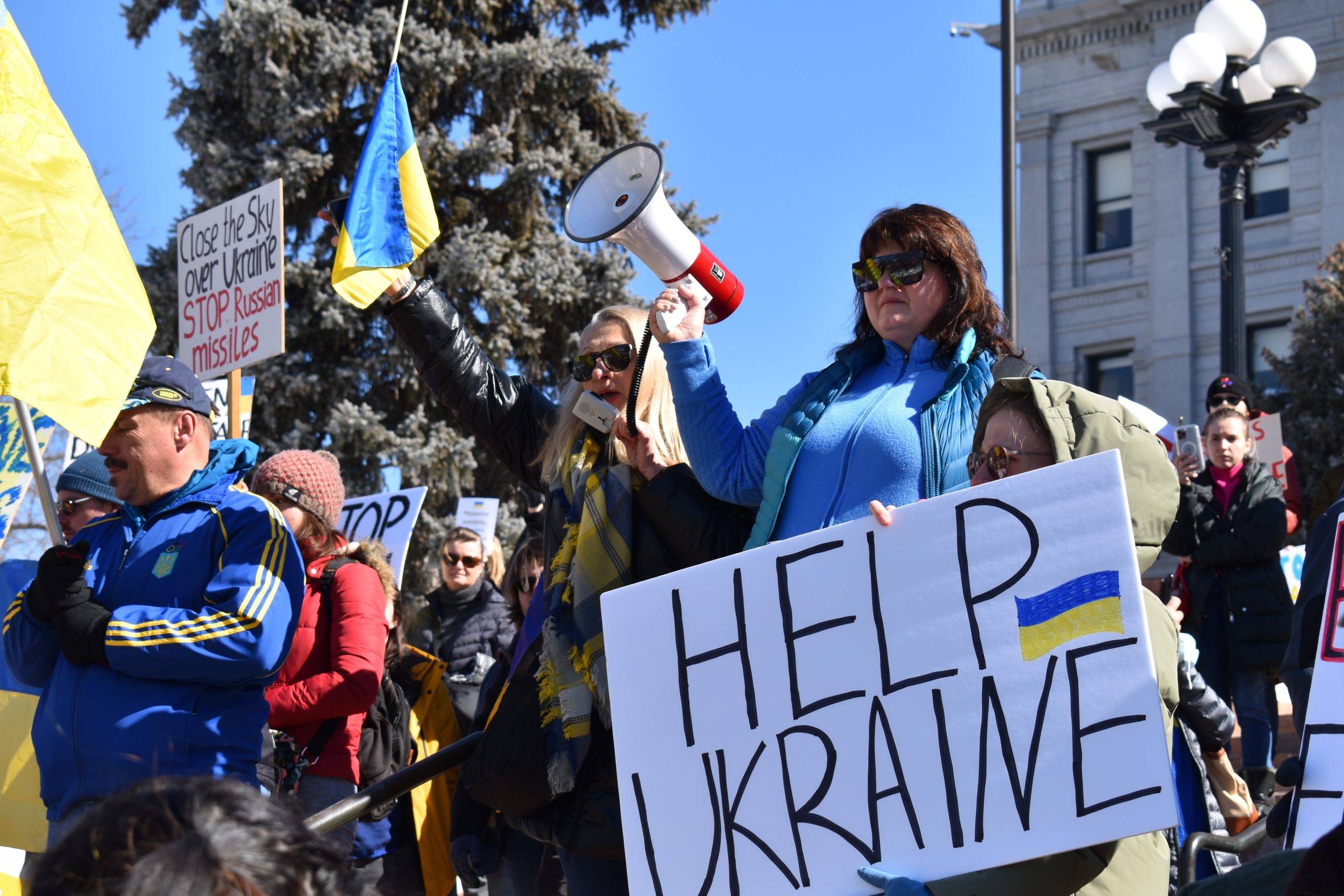 Speakers share a microphone to speak to the crowd in Ukrainian. (Isabella Hammond/CU Independent) 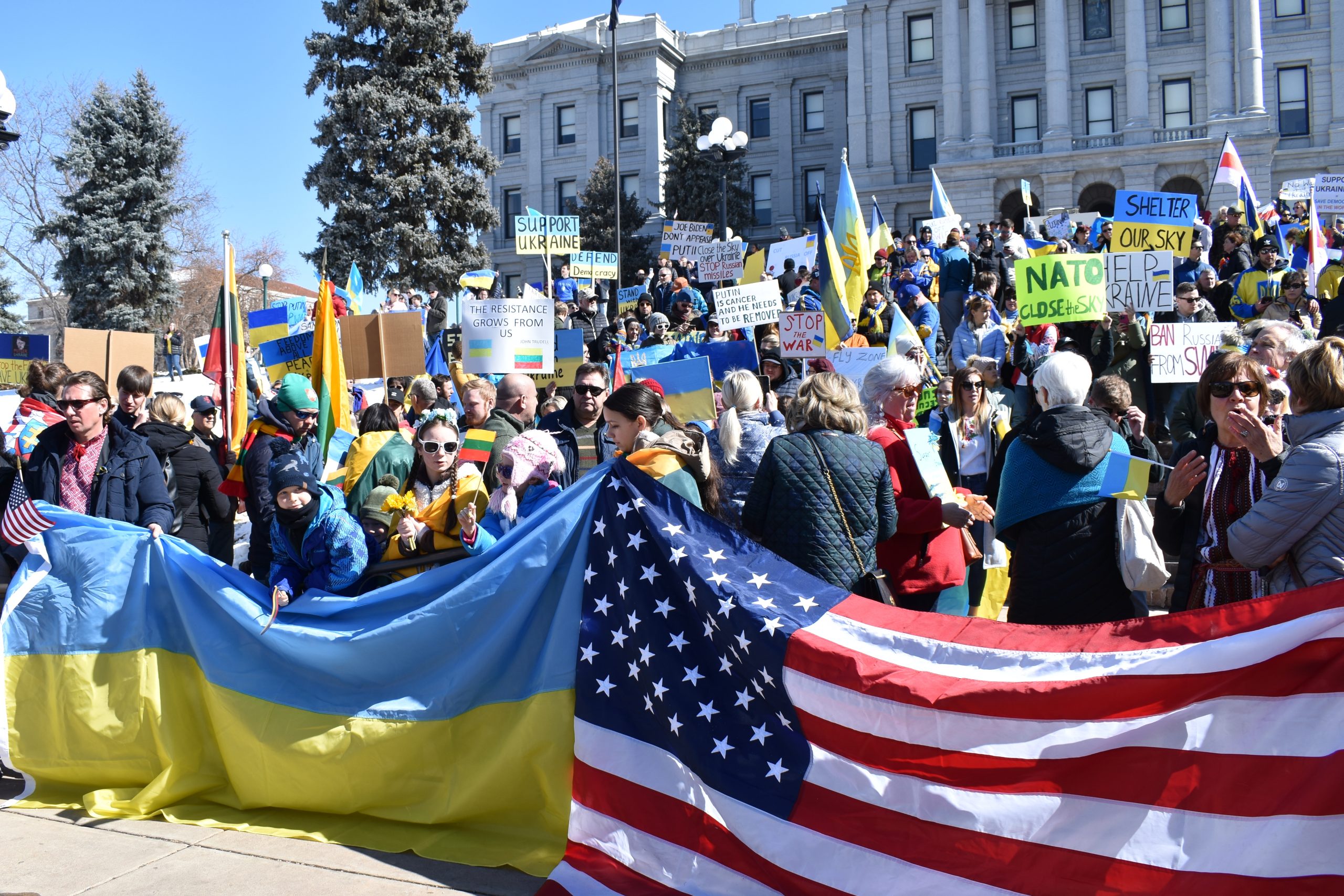 The Ukrainian and United States flags held together at the front of the rally. (Isabella Hammond/CU Independent) 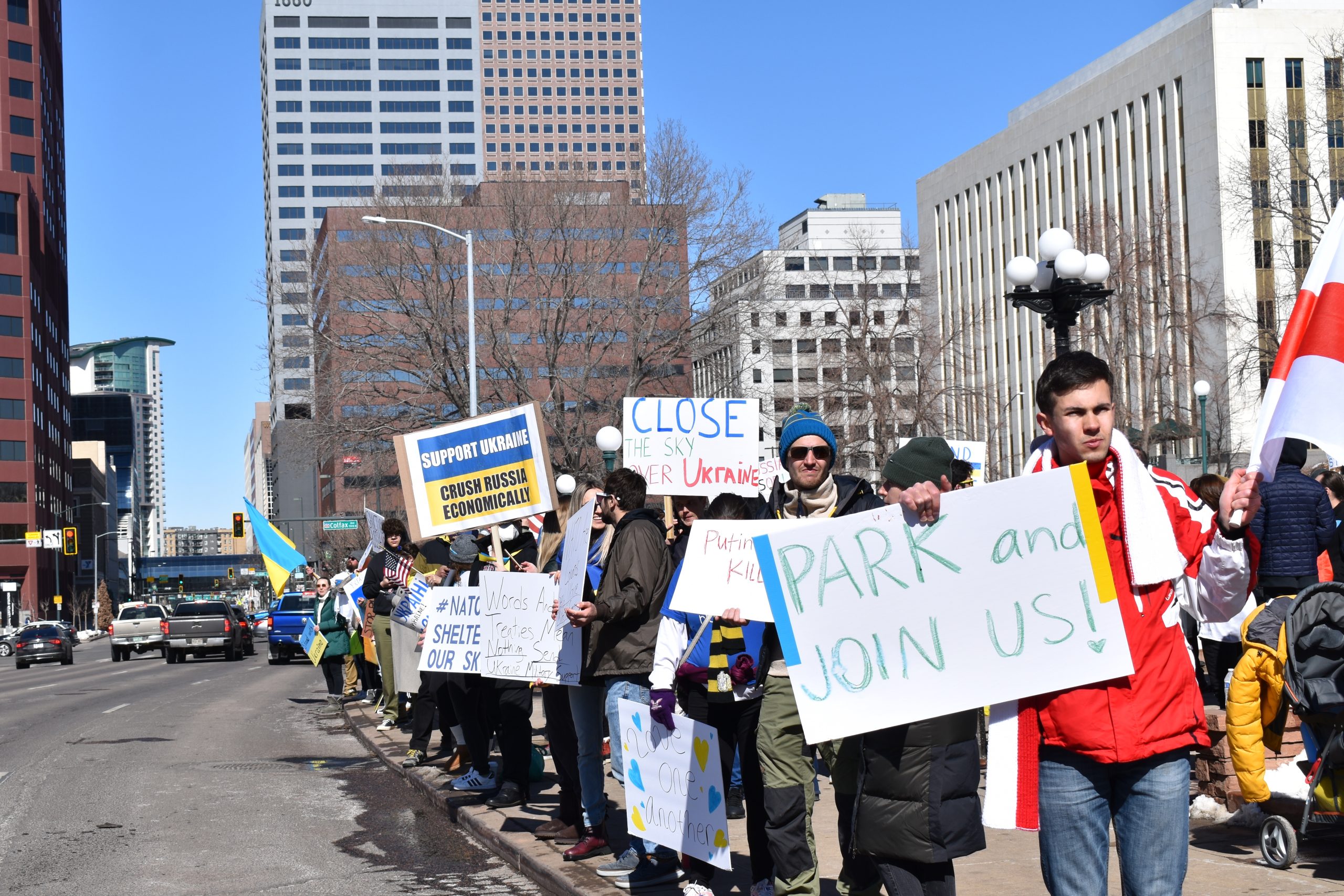 People line the edge of the sidewalk to display their signs to passing cars. (Isabella Hammond/CU Independent) 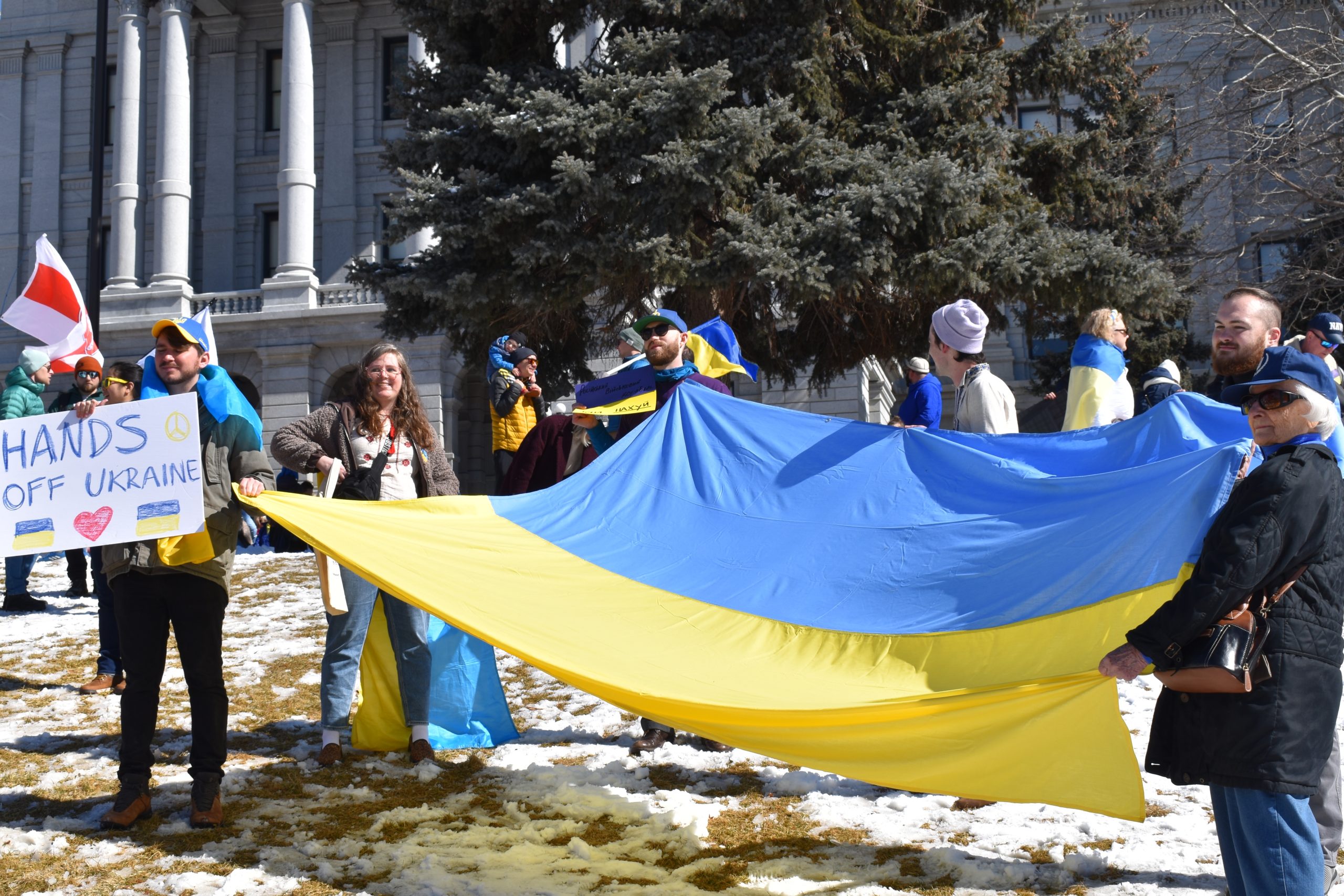 A group of people stand together to hold the Ukrainian flag above the ground. They held this position for over 30 minutes. (Isabella Hammond/CU Independent) 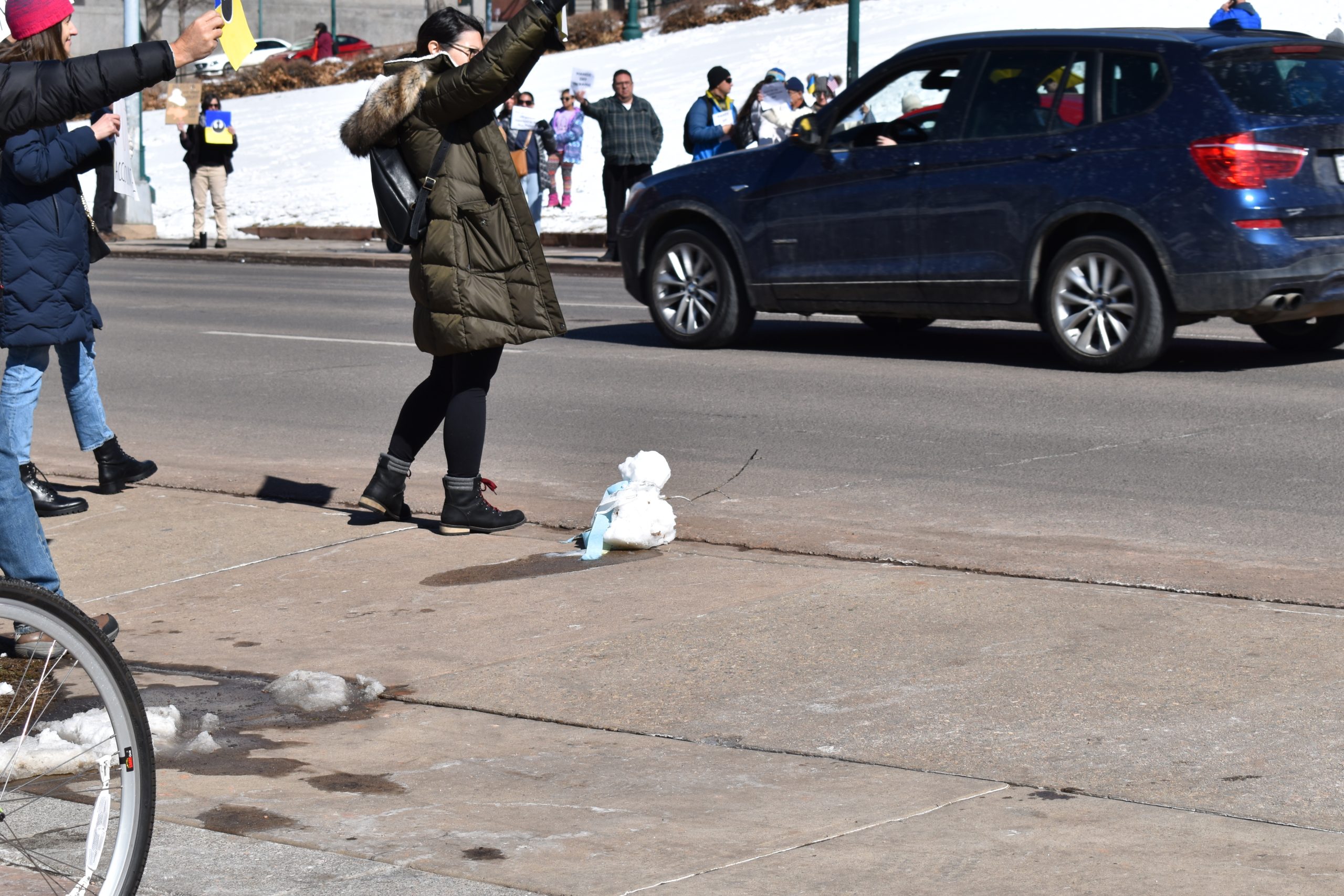 A snowman sits at the edge of the sidewalk, sporting a scarf made of Ukrainian blue and yellow streamers. (Isabella Hammond/CU Independent)