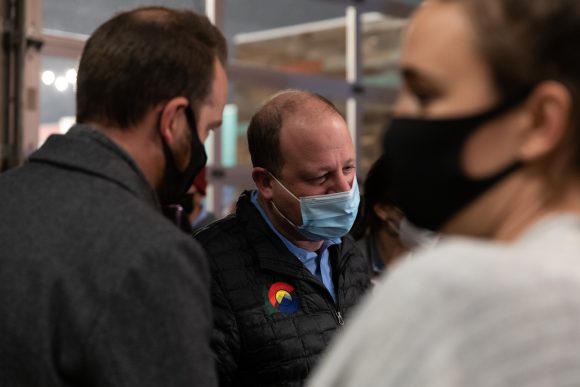 Colorado Gov. Jared Polis spoke with audience members during his stop at Rayback Collective in Boulder for his re-election campaign on Feb. 16, 2022. (Io Hartman/CU Independent)

On Wednesday, Feb. 16, several dozen people gathered to watch Gov. Jared Polis speak in downtown Boulder as he kicked off his 2022 reelection campaign. The governor brought up climate, economic and public safety issues but didn’t focus on details about COVID-19 mitigation.

Preceded by Lt. Gov. Dianne Primavera and Congressman Joe Neguse, Polis began his speech by noting his track record during his last term in office. He spoke about his history with environmental issues, universal early education and disaster relief.

“I am proud of Colorado, I am proud of our resilience,” Polis said. “We’re building back stronger and better than ever before.”

Polis said that he was proud of Colorado’s recovery after devastating wildfires, the reopening of the Table Mesa King Soopers and the state’s low COVID-19 death rates. He did not address any of the specifics of his COVID-19 policies, an area where he’s attempted to strike a middle ground, encouraging masking and vaccination but not going as far as to mandate masks in indoor public spaces.

Recently, Boulder County announced that it would lift its mask mandate on Friday, Feb. 18. The University of Colorado Boulder said that its masking restrictions would remain in place, to ensure classes stay in person. That split is similar to many counties and communities in the state which have adopted their own stance on masking.

“In general, masks offer an additional layer of protection, but that’s a personal choice people make across our state and that communities and schools make as well,” Polis said after his speech.

Polis also said that he was interested in continuing to work with the CU system, along with other Colorado colleges and universities, to provide more opportunities for marginalized students to have access to education.

“We want to make sure we can reduce high cost as a barrier to attending CU. We want to make sure that people in different areas of our state, including refugees and new immigrants, know the opportunities that they have and that a college education can unlock but also know that we can help them get there,” he said. 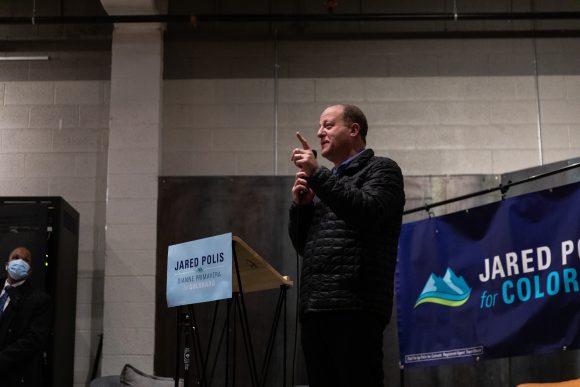 Colorado Gov. Jared Polis spoke during his stop at Rayback Collective in Boulder for his re-election campaign on Feb. 16, 2022. (Io Hartman/CU Independent)

During his speech, the governor promoted tenants of his reelection platform: public safety reform being a key focus. Polis recently announced a $113 million package to create new public safety and law enforcement programs, which closely matches his goals for a second term.

The governor said he also wants to reduce fees and high prices for residents, as well as continue to move the state towards a goal of 80% renewable energy by 2030.

This stop in Boulder is just one of 22 places around the state that Polis will be visiting over three days, in hopes of drumming up support for his reelection in the fall.