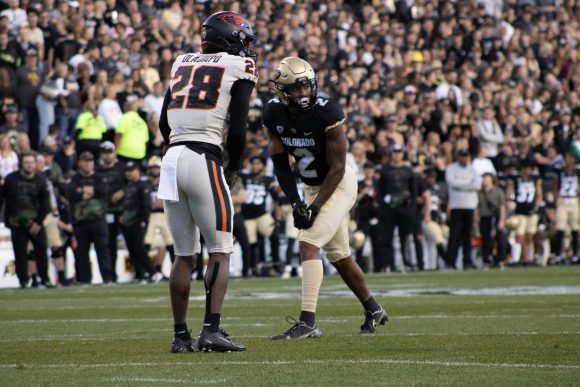 Freshman wide receiver Brenden Rice awaits the play call during the game on Nov. 6, 2021. Rice scored a touchdown during the third quarter to make it 20-10. (Brett Robinson/CU Independent)

Colorado achieved their second inter-conference win as they defeated the Oregon State Beavers in double overtime 37-34 on Saturday night. The offense has shown some explosiveness in each of their last two games, and this was just the second time Colorado has scored on their opening drive this season. Freshman quarterback Brendon Lewis has tallied six touchdowns over the last two games, as the Buffaloes look to ride on his dual-threat ability to find the end zone.

Brendon Lewis has caught the attention of many Coloradans, proving in consecutive games that he can lead a productive offense. After Lewis found the end zone three times in last week’s contest, he recorded another three passing touchdowns against Oregon State, including 170 passing yards. Lewis mentioned how his teammates are a big reason for his sustained success.

“I feel good,” Lewis said. “I feel like I have been progressing every week, and I feel like my teammates are a big part of that. They’re going out there making plays for me. The (offensive) line is holding up well. I feel like we’re all progressing as a unit, as a whole.”

The wide receiver room continued to increase in excitement as the young group had multiple moments of production. Freshman wide receiver Brenden Rice found the end zone again on a five-yard pass from Lewis, totaling two touchdowns for Rice in as many games. Returning from a six-game suspension, freshman wide receiver La’Vontae Shenault saw immediate action when he caught two passes for 24 yards from Lewis in just the first half.

“We know what we are capable of doing,” Perry said. “We just really need to focus up and take the opportunities that present themselves.”

Last week, Colorado committed a total of 11 penalties, leading to the team’s poor performance. Unfortunately, this week’s practices did not fix much as the Buffaloes ended the game committing nine more penalties. Head coach Karl Dorrell noticed how the multiple penalties are rising and how that has affected the team.

“That’s something that should be fixed at practice,” Dorrell said. “It’s unfortunate that this has happened because usually, those things are difference makers in losing games. We had 11 last week and then nine this week. That’s not characteristic of our game, but it’s been an issue, and we have to clean those up.”

Special teams played a crucial role in this matchup as freshman kicker Cole Becker went 3-4 on field goals, one of which was the game-winning field goal in double overtime, which resulted in the crowd storming the field. Oregon State’s kicker, Everett Hayes, broke his personal record when he made a 60-yard field goal in the fourth quarter with one second left, forcing Colorado into overtime. Becker explained his emotions watching Hayes’ game-tying field goal.

“He lined up for 60 (yards), and I said ‘no shot.’ I was standing on the bench when it went in, and it was probably good from 65. But I felt the same as Brendon (Lewis). We just needed to go out there and do it again.”

The Colorado Buffaloes will face the UCLA Bruins next Saturday, Nov. 13, at the Rose Bowl Stadium in Los Angeles at 7:00 p.m MST.