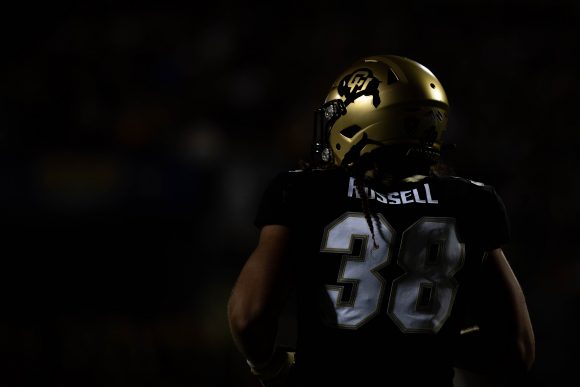 Junior tight end Brady Russell awaits for the play to begin during the third quarter on Sept. 3, 2021. (Kara Wagenknecht/CU Independent)

On Saturday, the Colorado Buffaloes (1-1) will take on Big Ten foe Minnesota (1-1) at Folsom Field. Kickoff is set for 11 a.m. MST, meaning the Buffs must be ready for the early start. Colorado is 3-0 all-time against the Gophers, including a 58-0 win in 1992 in Boulder. The Buffs will be looking to clean the slate after narrowly missing out on a top-5 upset against SEC powerhouse then-No. 5 Texas A&M on Sept. 11.

Minnesota is coming off a win against Miami-Ohio but is missing its star tailback, Mohamed Ibrahim, who was injured during week one against Ohio State. Even without Ibrahim last week, the Gophers were able to rack up plenty of yards on the ground, with sophomore running back Trey Potts rushing for two scores and 178 yards. The Colorado run defense has been stout this season, allowing an average of just 58 yards per game, but the Gophers offense will come as a test. Colorado head coach Karl Dorrell acknowledged the threat Minnesota’s run game presents even with Ibrahim missing.

“They’re a run-first offense,” Dorrell said. “They churn out yards, and they’re pretty efficient at doing that. They try to use a big offensive front and try to make defenses defend them. That’s going to be a tremendous challenge again for our defense this week.”

On the other side of the ball, the Buffs must get the run game going so freshman quarterback Brendon Lewis and the passing game can accelerate. The Minnesota defense has not been great at generating pressure with only five tackles for a loss and no sacks which may give CU the opportunity to finally get their aerial offense moving after averaging only 95 passing yards through two games.

“Offensively, we have to be able to find more opportunities,” Dorrell said after Tuesday’s practice. “We have to score some points and convert some third downs and get some continuity there. We’ll work on those things in great detail this week.”

Once again, this could be a game won in the trenches with points likely hard to come by. The Gophers, led by head coach P.J. Fleck, have won 20 straight non-conference games.