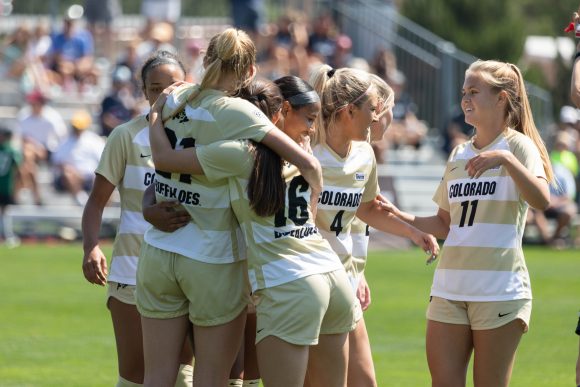 Senior defender Hannah Sharts celebrates with her teammates after scoring the first goal of the game. Sept. 5, 2021 (Kara Wagenknecht/CU Independent)

After losing two games to two top-10 opponents, the University of Colorado soccer team was back at Prentup Field looking to build off its 2-0 win over Stony Brook with another win against the Cal State Fullerton Titans.

The Buffs came out of the gate looking to score. They had their chances in the first ten minutes, but were unable to convert. After about 20 minutes of fairly even play, Colorado was able to break through on a clinical goal by senior midfielder Shanade Hopcroft, who carried the ball through the Cal State Fullerton defense before striking a shot from just outside the box to give the Buffs a 1-0 lead.

Following Hopcroft’s goal, CU held the majority of possession during the second half, making it difficult for the Titans to get their attack going. Right before halftime the Buffs were able to add a second goal, this time by senior defender Haileigh Adams. For Adams, it was her first collegiate goal after playing in over 70 collegiate games.

“It was exciting,” said Adams on her first goal. “I was actually talking about it earlier, like I would never score a goal I am a defender, but now I scored so it was pretty cool.”

Her first goal came at the perfect time as the Buffs looked like the dominant side headed into the locker room with a 2-0 lead at the half.

Despite the two goal lead, the Buffs were determined to add more, coming out of the break with no intention of taking their foot off the gas. After a 15 minute period of chances being created for both teams, junior midfielder Allie Palangi got the eventual game-winner past the CSF goalkeeper’s near post to make it 3-0 Colorado. Palangi marked the third different Buff to score, proving that CU has multiple attack options.

“We have talent everywhere on the field,” Adams said. “I am very excited for this season.”

Cal State Fullerton would get a goal back in the 70th minute before many of the Colorado starters were subbed off. However, the Buffs were not done scoring as a beautiful cross into the box from senior midfielder Kayleigh Webb found the feet of fellow midfielder Rachel Rosen who calmly put in the bottom corner to give the Buffs a 4-1 lead.

The Titans would score a tap-in goal in the 86th minute, but the Buffs had already taken care of business with a clinical performance in attack including two first-time goal scorers.

“I thought this was the best we played in the attack,” said head coach Danny Sanchez of his team’s attacking performance. “Not because we scored, but I thought our movement was good. I thought our thought process was good. I don’t know that we created more chances today than we did on Sunday (against Stony Brook), but we scored some good goals. There was nothing cheap about any of them.”

The Buffs improved to 4-2 on the young season and now face a stretch of three straight road games starting with next weekend in West Lafayette, Indiana against Purdue. Sanchez previewed the game and how the Buffs performance tonight was a good start.

“We play another really good team on Sunday on the road,” Sanchez said of Purdue. “We not going to get as many opportunities as we did today, so we are going to have to be efficient”

Colorado soccer will be in action against Purdue this Sunday, Sept. 12, at noon MST.

Sophomore at the University of Colorado Boulder. Political Science Major with a Sports Media Minor. You can follow him on Instagram at @charlie.strella or on Twitter @charlie_strella.