Buffs move to 2-0 with win over Orediggers 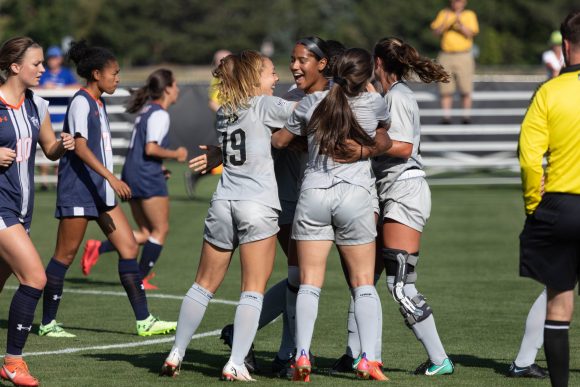 Sophomore forward Shyra James celebrates with her teammates after scoring the third goal of the game to give CU a 3-0 lead in the first half on Aug. 25, 2021. (Kara Wagenknecht/CU Independent)

The University of Colorado women’s soccer team continued its successful start to the season on Wednesday, Aug. 25 against the Colorado School of Mines at Prentup Field. Following a no-contest game against Colorado State University and an overtime win over Colorado College on Sunday, the Buffs prevailed over the Orediggers 3-0.

The game, which was put on the schedule just two days prior, came in response to replacing the no-contest affair with CSU.

With Colorado’s matchup against No. 1 Florida State University on the horizon, head coach Danny Sanchez made the decision to start four freshmen against Mines. Not only does this help provide those players with valuable experience, but it allows the team’s frontline players to rest their legs before facing FSU on Sunday.

“We would have trained really hard today (if no game was played),” Sanchez said. “Maybe some of the players didn’t work as hard as they would have at training. It was really about finding a rhythm and working on some different formations. We moved some people around.”

The Buffs got off to an electric start with an early goal by freshman forward Hannah Duguid in the 14th minute. Duguid drove to the net before poking the ball past the goalkeeper and into the right corner. 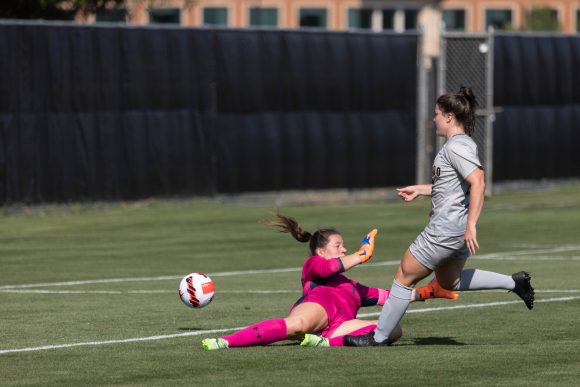 Freshman forward Hannah Duguid watches the ball roll past the goalkeeper for Colorado School of Mines to score the first point of the game during the first half on Aug. 25, 2021. (Kara Wagenknecht/CU Independent)

Just minutes later, senior midfielder Kayleigh Webb added to the lead with another goal in the 22nd minute. Junior midfielder Allie Palangi contributed with an assist on both of those goals.

Freshman midfielder Ellen Jones, sophomore midfielder Rachel Rosen and senior defender Hannah Sharts also added to their own stats with one assist each.

In the 39th minute, sophomore forward Shyra James joined the party with a header that snuck over the head of the goalie.

While the Orediggers improved their defense in the second half, the Buffs’ defense remained intact throughout. Senior goalkeeper Bella Grust pitched a shutout and her teammates backed her up with blocks in front of the net. 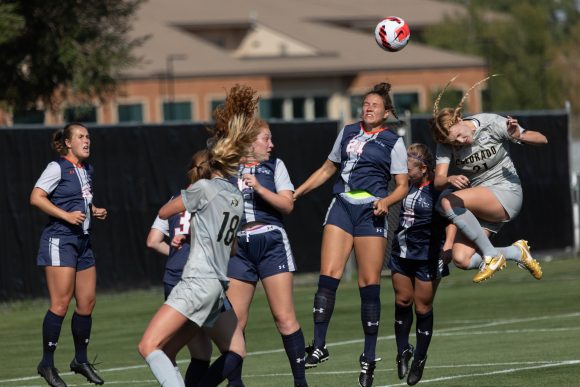 Senior defender Hannah Sharts head-butts the ball towards the goal during a corner kick in the first half on Aug. 25, 2021. (Kara Wagenknecht/CU Independent)

Along with allowing no goals, Grust also had four saves, including one in which she needed to use her entire 5-foot-9 frame to tip the ball just over the net to keep the Orediggers scoreless.

Sanchez and the Buffs will now turn their sights toward Florida State on Sunday at 11:30 a.m. MST at Prentup Field.