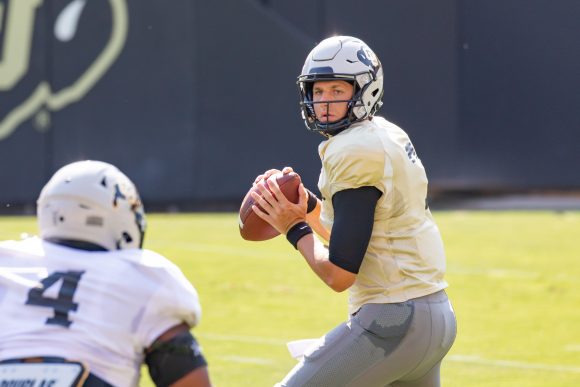 On Saturday, the University of Colorado football team held its first scrimmage of preseason camp. This marks a valuable opportunity for head coach Karl Dorrell and his staff to evaluate the Buffs in padded, 11-on-11 action.

“It was good work,” Dorrell said. “Good chance to see everybody all the way down to our thirds… I saw some really good things.”

One of the main headlines throughout training camp has been the quarterback battle between freshman Brendon Lewis and sophomore J.T. Shrout. The battle took a discouraging turn early in the scrimmage as Shrout suffered a knee injury while cutting left on a QB run. He was unable to leave the field under his own power and was carted off the field. After the scrimmage, Dorrell said there is currently no information regarding the extent of the injury. Shrout’s teammates shared their support and hope for a quick recovery.

“It’s heartbreaking,” said sophomore wide receiver Dimitri Stanley. “All we can do is rally around him and pick him up, bring him along with us.”

On the defensive side of things, junior safety Isaiah Lewis was impressed with the energy CU displayed. Besides a 66-yard rushing touchdown from sophomore runningback Jarek Broussard, who added another 42-yard run soon after, the defense kept the offense out of the endzone early, but not often. Lewis shared that communication has been preached often by the defensive coaching staff, which is now led by first year defensive coordinator Chris Wilson. 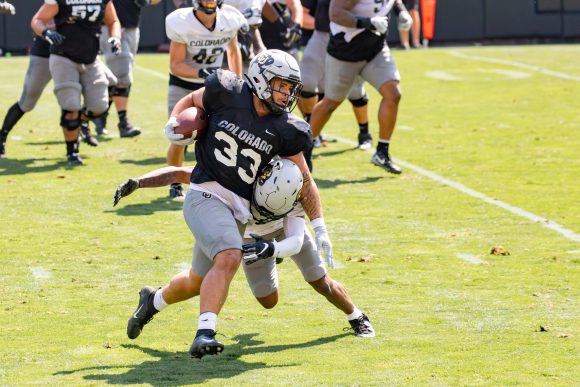 Freshman tailback Jayle Stacks does his best to keep running while being tackled by an opposing teammate. Aug. 14, 2021 (Casey Paul / CU Independent)

The outside linebackers unit, which was without the sidelined junior Carson Wells on Saturday, showed its increased depth from a year ago. Dorrell highlighted redshirt freshman Joshka Gustav, junior Guy Thomas and junior Jamar Montgomery as key outside linebackers that have played well in camp thus far.

“It’s good to have three, last year we had two,” Dorrell said regarding his outside linebackers group. “It’s good to have a few more guys that can give us some great reps and great experience, developing and being pretty good players for us and those three are really on that track.”

With still plenty of training camp to complete, Dorrell added that there is still plenty to work on as the Buffs prepare for their season opener against Northern Colorado on Sept. 3.

Another Buffaloes’ blunder, as CU loses to UCLA 45-17