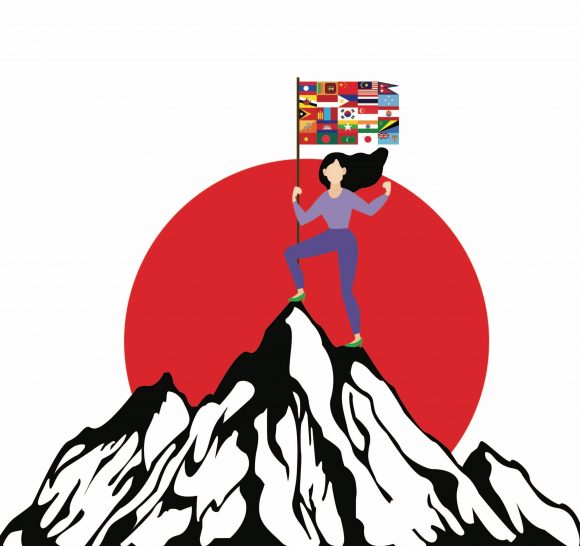 In honor of AAPI heritage month, four female creatives from Colorado reflect on how they identify as Asian-American, their heritage and their creative style. The spotlights include singer-songwriter Grace Clark, interdisciplinary artist Sammy Lee, screenwriter Marin Lepore and sculptor Yumi Roth.

Korean adoptee with American parents, who grew up in the U.S. 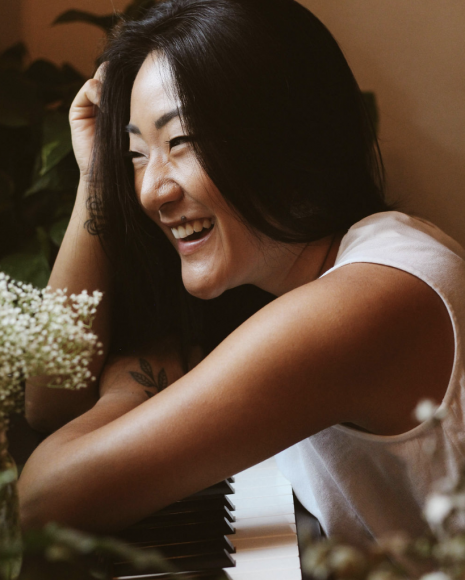 When opera singer Grace Clark heard bluegrass for the first time, she knew she had discovered her true passion.

“I remember hearing (bluegrass) and falling so deeply in love,” Clark said. “I remember thinking I need to pursue this – it’s what I have been waiting for.”

Soon after, Clark began writing her own songs and establishing herself in Denver’s bluegrass and acoustic folk scenes. In 2019, she released her self-titled debut EP, which she describes as a heartfelt and intentional exploration of life and love.

While pursuing her passion for bluegrass, Clark often struggled with the genre’s lack of diversity. Historically, bluegrass has been a white, male-dominated genre from the heart of the American South. Many white women, including Alison Krauss, Rhona Vincent and Sierra Hull, rose to fame in recent decades, however, there is still a lack of representation for people of color.

Clark focuses on creating inclusive musical spaces for both audiences and musicians. A few years ago, she started the Rambler Music Sessions, a house concert series that showcases local and touring musicians, specifically those from marginalized communities. 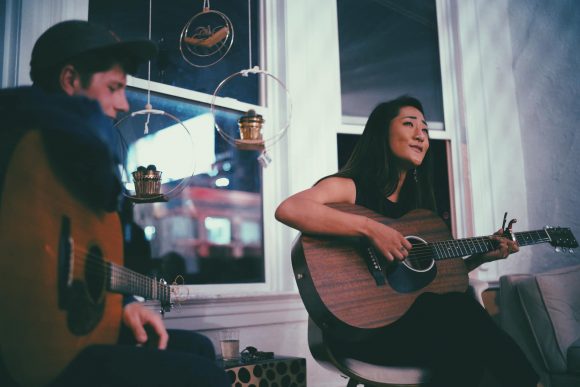 “I wanted to create a space where I was amplifying and highlighting the BIPOC and queer communities,” Clark said. “As an adoptee and a woman of color, I have always tried to be aware of (inclusivity).”

During COVID-19, Clark continued to be a musical activist, despite not being able to perform live. She aims to raise awareness about anti-Asian racism and violence and hopes to empower others to become AAPI allies.

“The AAPI community is finally starting to step into their power and speak out against racism,” Clark said. “We have been told to stay quiet for too long.”

“If people want to be a better ally to the AAPI community, they need to start asking themselves the hard questions,” Clark continued. “Then the next step is (action). If and when you see an Asian person being harassed, remember to use your voice and stick up for those who are being oppressed.”

Find out more about Clark here. 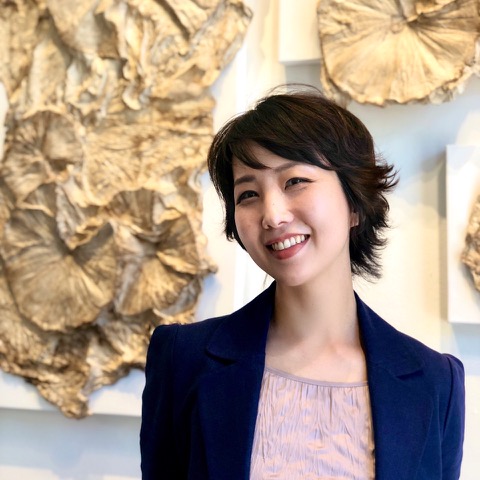 Sammy Lee, a Korean artist based in Denver, feels a powerful connection to hanji as a part of her heritage.

Hanji, hand-made Korean mulberry paper, is said to last a thousand years. The oldest printed material in the world, dating back to 751 A.D., was created on hanji.

In Korea, hanji has been an integral part of daily life for thousands of years. In traditional homes, it is used for household objects, furniture and wallpaper. Other uses include calligraphy paper, books, crafting, art and even disposable clothes.

In her artwork, Lee uses the paper in innovative ways for bookbinding and casting everyday objects like suitcases, rocks and shop signs; a process she describes as intensely creative but also challenging.

“When the paper is wet, it can become anything,” Lee said. “It has so much potential. (Working with hanji) is a time-intensive, laborious process, so I have time to think about the significance of the materiality and how it relates to my Korean identity and heritage.”

In her interactive project, “Very Proper Table Settings,” Lee uses the paper to cast Korean dinnerware and invites community members to arrange imaginary meals for loved ones, leading to impactful discussions about the intersection of food and culture. 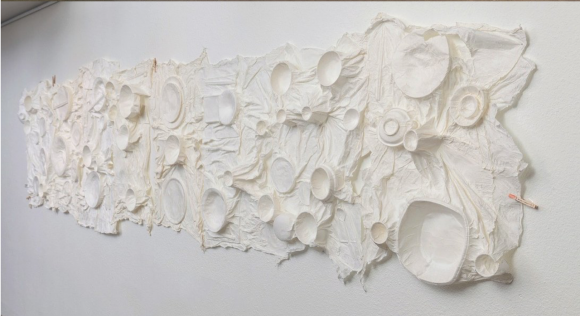 “I try to bring underrepresented narratives into the community and create interest,” Lee said. “It takes a lot of time and effort to do that.”

During COVID-19, Lee has also raised awareness of racism against the AAPI community. Last August, she launched the community art project “COVID Walls” with Stella Yu to display photos of victims, survivors and frontline workers. Lee particularly wanted to highlight AAPI frontline workers, who have put themselves and their families at risk to serve their local communities.

“There are a lot of Asians in healthcare,” Lee said. “I wanted Asian faces to be associated with people who are serving, (instead of) only with the virus.”

Find out more about Lee here and her upcoming exhibit inVISIBLE / hyperVISIBLE at Redline here.

Chinese adoptee with American parents, who grew up in Colorado and Beijing, China 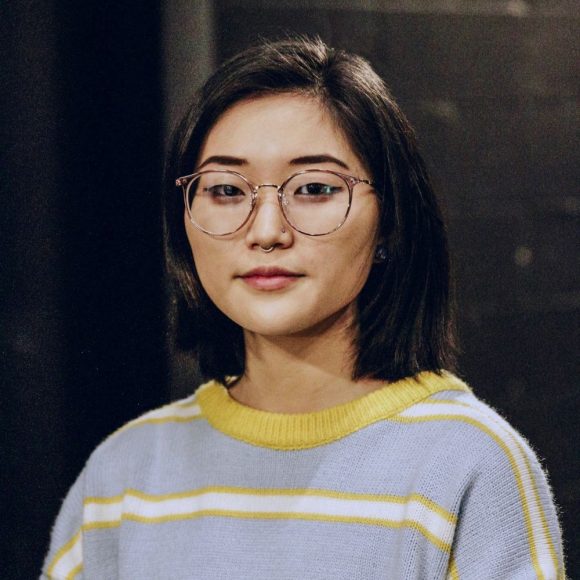 Growing up as an LGBTQ, Asian American woman, Marin Lepore seldom saw herself represented on-screen, especially in kid-friendly content. Now, she’s a screenwriter and activist taking representation into her own hands.

In 2018, Lepore co-founded Sad Girl Productions, a Denver-based independent film company, while still pursuing her undergraduate degree at the University of Colorado Denver. She wanted to produce inclusive, female-focused comedy films while working with a diverse cast and crew.

“Our goal is to empower women, (especially) women of color and other marginalized communities, by highlighting them on and off camera in an authentic way,” Lepore said.

Lepore is particularly passionate about creating inclusive content for kids. In 2018, she began writing and directing “I Put the Bi in Bitter,” a light-hearted comedy web series that depicts a bisexual teenager, Sam, and her lesbian best friend, Alex. The series explores how these characters navigate life, love and growing up in high school. The cast features all-female AAPI leads, starring Rhema Srihartiti as Sam and Rhianna DeVries as Alex. To boot, the crew is mostly female, people of color and LGBTQ. 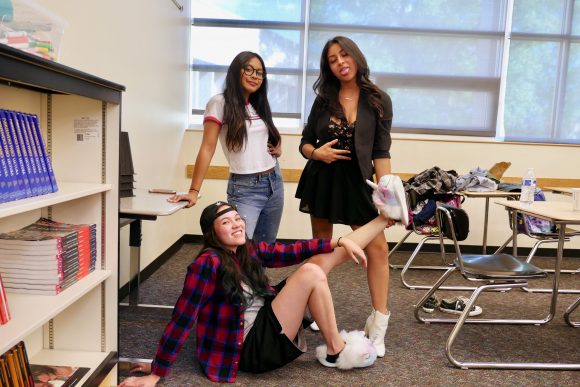 “It’s a series made for these communities by these communities,” Lepore said. “Representation starts behind the scenes. If (these stories) are filtered through the lens of people not in those communities, (it will be) inauthentic. That’s what leads to stereotypes and misconceptions.”

In the future, Lepore wants to become a full-time screenwriter for kids’ TV shows in Los Angeles. She hopes to challenge the lack of AAPI representation in Hollywood and create the representation she wished she had growing up.

“If I had representation growing up, that would have expedited my process of self-acceptance,” Lepore said. “If I can do that for other kids, that (would be) so empowering and inspiring.”

Find out more about Lepore here. Listen to the full CUI interview with Marin Lepore below.

Filipino-American born in Oregon, who grew up in the U.S. and Manila, Philippines 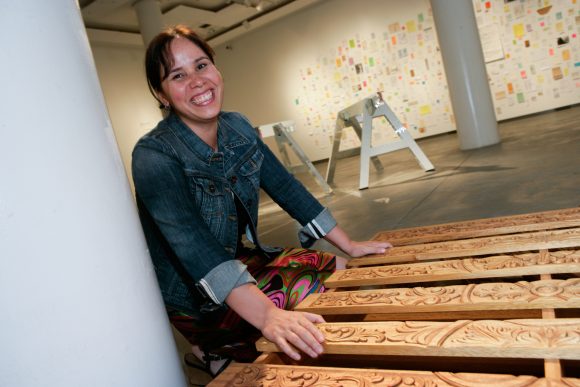 Tumbleweeds are always in motion. Rolling across the plains, each plant disperses nearly 250,000 seeds along its journey.

The tumbleweed has become a romantic symbol of the American West, embodying the cowboy spirit of self-reliance, resilience and adventurousness, yet, it is not a native to the U.S. Imported from Russia in the 1870s, the invasive species soon took over the West, spreading as far as California and Canada in a few decades.

Yumi Roth, a University of Colorado Boulder art professor, is fascinated by the symbolism and historical context of tumbleweeds. In 2017, she created “Tumbleweed Kintsugi” to explore how the plant exemplifies the intersection of immigration, displacement and American identity. The work features collected tumbleweeds rebuilt and repaired with sterling silver; a process is similar to kintsugi, the traditional Japanese craft of repairing broken pottery with gold. 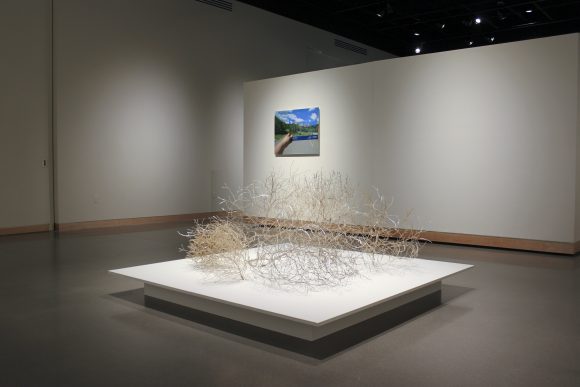 Roth explores the ambiguity and complexities of identity in her other works. She often frames her art through the lens of cultural anthropology, examining the expression of identity in material culture, including shipping palettes, signs and barbed wire.

“As an artist, I am interested in liminal and in-between spaces, miscommunication, misunderstandings and the slippages of language,” Roth said.

As a mixed-race, Filipino-American woman, Roth is intimately familiar with in-between spaces and cultural misunderstandings. She has often struggled with feelings of invisibility, especially in all-white spaces.

“There’s a quality of invisibility built into Asian-American identity,” Roth said. “If you aren’t East Asian, there’s another level of invisibility.”

Roth is happy to see increased visibility for the AAPI community in recent years, especially for Southeast Asians. However, she believes more work must be done to highlight the community’s diversity of identities, heritages and cultures.

“I hope the presumed monolith of Asian-Americanness can be dismantled,” Roth said.

“It will still be a collective identity that (connects us), but other people will understand it’s not so simple. We all have complex histories and identities.”

Find out more about Roth here.