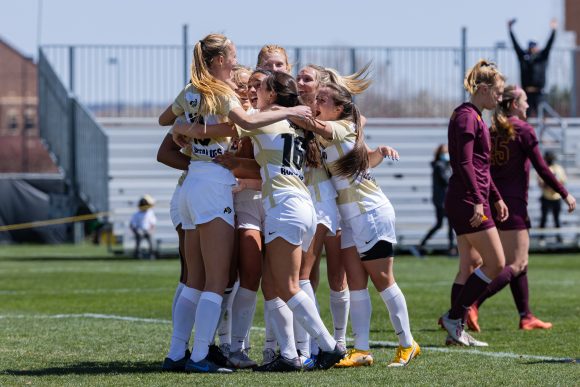 On Monday, the University of Colorado soccer team gathered to see if their season would continue in the NCAA tournament. After a strong finish to the regular season, capped off by a victory over Utah on April 16, head coach Danny Sanchez said he was optimistic that CU would hear its name called. However, in an unusual season defined by the COVID-19 pandemic, there were no guarantees that the Buffs would make the 48-team NCAA tournament field.

CU may have sweat a bit as 39 other teams were announced on Monday before the Buffs finally heard their name called to play South Alabama in the first round. With the selection, CU has now made back-to-back NCAA tournaments and 12 total in program history.

Sanchez and the Buffs will now turn their sights to their first-round opponent and Sun Belt Conference tournament champion, South Alabama Jaguars. The tournament will be held in North Carolina with CU’s first round matchup on Tuesday at 5 p.m. MST.

The Buffs’ selection to the NCAA tournament this season wasn’t easy and even appeared unlikely at times.

As Colorado walked off the pitch on April 2, it appeared that the Buffs’ season was on the brink. CU had just lost to Oregon State, the worst team in the Pac-12. It was the Buffs’ second straight loss and dropped them to the bottom half of the conference standings at 2-4-1. With only four games left in the season, CU had to right the ship and do so quickly if the Buffs wanted to have any chance of making the NCAA tournament.

The Buffs responded in the best way possible as the loss to Oregon State would prove to be the team’s last defeat of the season. CU closed out the final four games with a 3-0-1 record, picking up pivotal wins over Oregon, No. 17 Arizona State and Utah. With the hot streak, CU finished at 5-4-2 in the Pac-12 which was strong enough for a fifth-place finish.

South Alabama’s year has been a story of two seasons. Unlike the Buffs, South Alabama was able to compete in both a fall and a spring season. In the fall, the Jaguars went 8-2 in conference play and beat Arkansas State to win the Sun Belt tournament and earn an automatic bid to the NCAA tournament. The spring season has been a different story for South Alabama as the Jaguars struggled with a 3-5 record while playing a mix of challenging non-conference Division I opponents and Division II teams.

Here is how CU matches up against South Alabama:

On paper, it might appear that South Alabama has the offensive advantage. The Jaguars are ranked second in the NCAA in total goals scored and are tied for the 40th best scoring offense at 2.09 goals per game. The Buffs, on the other hand, have struggled throughout the season to find an offensive rhythm with just 1.12 goals per game.

Numbers, however, don’t tell the entire story. While South Alabama has been good offensively within the Sun Belt conference, the Jags have struggled to score against non-conference opponents. This has played true in their last five games in which the Jaguars have been outscored 13-3.

As South Alabama’s offense is slumping, the Buffs’ offense has found its form the last two weeks as CU has scored two goals twice in its most recent four-game stretch.

CU’s offense has been led by freshman forward Shyra James and senior midfielder Shanade Hopcroft. James led the Buffs in goals at five and was named to the Pac-12 All-Conference Freshman Team. Hopcroft had three goals including a pivotal game-deciding score against Utah which helped earn her a spot on the Pac-12 All-Conference Third Team. Another Buff that should have an impact is sophomore forward Tessa Barton who has played strong minutes down the stretch.

The Jaguars have a fairly balanced offense. At the heart of that attack are two juniors: Brenna McPartlan and Morgan Cross. Together, McPartlan and Cross have combined for 18 goals this season. McPartlan leads the team with 11 goals and nine assists. Cross finished with seven goals and seven assists and is a big reason why the Jaguars are in the NCAA tournament. Her two goals were the difference against Arkansas State in the Sun Belt Championship which secured the Jags a spot in the NCAA tournament.

Defense has been the name of the game for the Buffs all season. CU’s defense has held opponents to just .714 goals a game with eight shutouts.

It has been a different story for the Jaguars on the defensive end. The Jaguars are ranked 176th in the country allowing 1.267 goals per game. Some of the difference may have to do with who is in net for South Alabama. The Jaguars have relied on two freshman goalkeepers this season: Allison Luckhardt and Anita Gudmundsdottir. Both freshmen have struggled mightily in their first season as they have combined for just a .700 save percentage.

The Buffs, meanwhile, have been anchored by the lockdown goalkeeping of sophomore Dani Hansen with an incredible .882 save percentage. In a Pac-12 conference filled with goalkeeping talent, Hansen earned Pac-12 All-Conference Third Team honors.

Colorado’s defenders is led by junior Hannah Sharts who was named to the Pac-12 All-Conference First Team. Senior Haileigh Adams, who moved into the starting role the last five games of the season, has also been strong defensively. Freshman defender Lawson Willis leads the team with six assists and freshman defender Jayden Newkirk will also be an important factor in the game.

South Alabama also has few strong defenders of its own. Tilly Wilkes, a junior from England, was named to the Sun Belt All-Conference First Team, and Leandra Flury, a sophomore from Switzerland, was named to the Sun Belt All-Conference Second Team (both of these distinctions were awarded for the fall season). The big question for South Alabama will be if the Jags’ defenders can keep enough pressure off their freshman goalkeepers to keep the game tight.