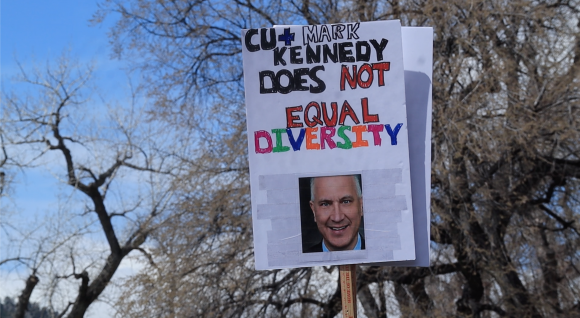 In a protest at the beginning of his career at CU, a protestor holds a sign of Kennedy, who while in Congress voted against same-sex marriage and other civil rights bills. April 15, 2019 (Robert Tan/CU Independent)

“CUSG, as the representative body of the associated students of the University of Colorado Boulder, finds that President Mark Kennedy has failed to lead with respect to diversity, equity, and inclusion,” read a motion proposed by CUSG.

Student leaders said that the issues their constituents had with Kennedy came long before this vote.

“On-campus and in the system, there’s this feeling (that) we were never really big fans of Kennedy to begin with,” said Molly Frommelt, one of the outgoing Tri-Executives of CUSG.

Frommelt said that Shubhashika Singh, a CUSG legislator, introduced the motion. Once Frommelt had it, she sponsored it and it was brought to a full vote later that week.

“This censure gives President Kennedy an opportunity to assess what it is that the campus and the system is saying that he has failed at and to change what he is doing,” Frommelt said.

The vote came after years of protest and concern regarding the former Republican congressman’s record on race and LGBTQ issues. Most recently, campus activist group diversifyCUnow launched a campaign they called #weCUkennedy, which included a timeline of the actions they deemed objectionable ranging from 2001 to 2021.

The organization compiled a list of more than a dozen incidents where they say Kennedy expressed or acted on racist and homophobic language. Unlike the censure vote, their campaign calls for the termination of Kennedy’s contract.

“We are calling for President Kennedy’s contract to be terminated by the Regents because of his long and consistent history of racist, sexist, and homophobic words and actions,” read an open letter created by diversifyCUnow and co-signed by more than 430 people.

Holly Olivarez is a CU Boulder graduate student and a lead organizer for diversifyCUnow. She said that creating a timeline of the events opened the door for community members to act on their frustrations with the system president.

“There hasn’t been one incident where you can say ‘Wow, terminate his contract.’ But when you put them all together is when you see the pattern,” Olivarez said.

Olivarez also mentioned that she had been following the Boulder Faculty Assembly and the Graduate Student Government’s actions on Kennedy, the former is considering a censure vote of its own.

diversifyCUnow is hoping that it can provide an outside voice, from people unheard in campus leadership, to sway the Board of Regents to their side.

“Our plan is to distribute (the letter) and ask folks interested to sign through the end of May and then deliver the letter with the signatures to the Regent Board ahead of the annual review,” Olivarez said.

Representing the Office of the President, spokesperson Ken McConnellogue said that President Kennedy believes that the CU community is “making progress” on diversity, equity and inclusion.

“(Kennedy) is the leader of the organization as President, along with the Board of Regents, so leadership matters. But, at the same time, real change happens in offices and departments around the four campuses,” McConnellogue said.

McConnellogue did not say if there would be any public comment or change in Kennedy’s leadership in the coming months.

“Certainly there are some valid points raised (in the censure motion). There’s also a fair amount of inaccuracy and things that have no bearing whatsoever on CU,” McConnellogue continued.

McConnellogue said that Kennedy’s vote against same-sex marriage as a congressman, which drew protest before he even took the job, did not warrant the censure vote.

“If you want to go back and comb through every detail of someone’s life as a marker of how they do their current job, I don’t know that is entirely fair,” McConnellogue said.

The Board of Regents will meet on June 17. They will vote to renew Kennedy’s contract then.