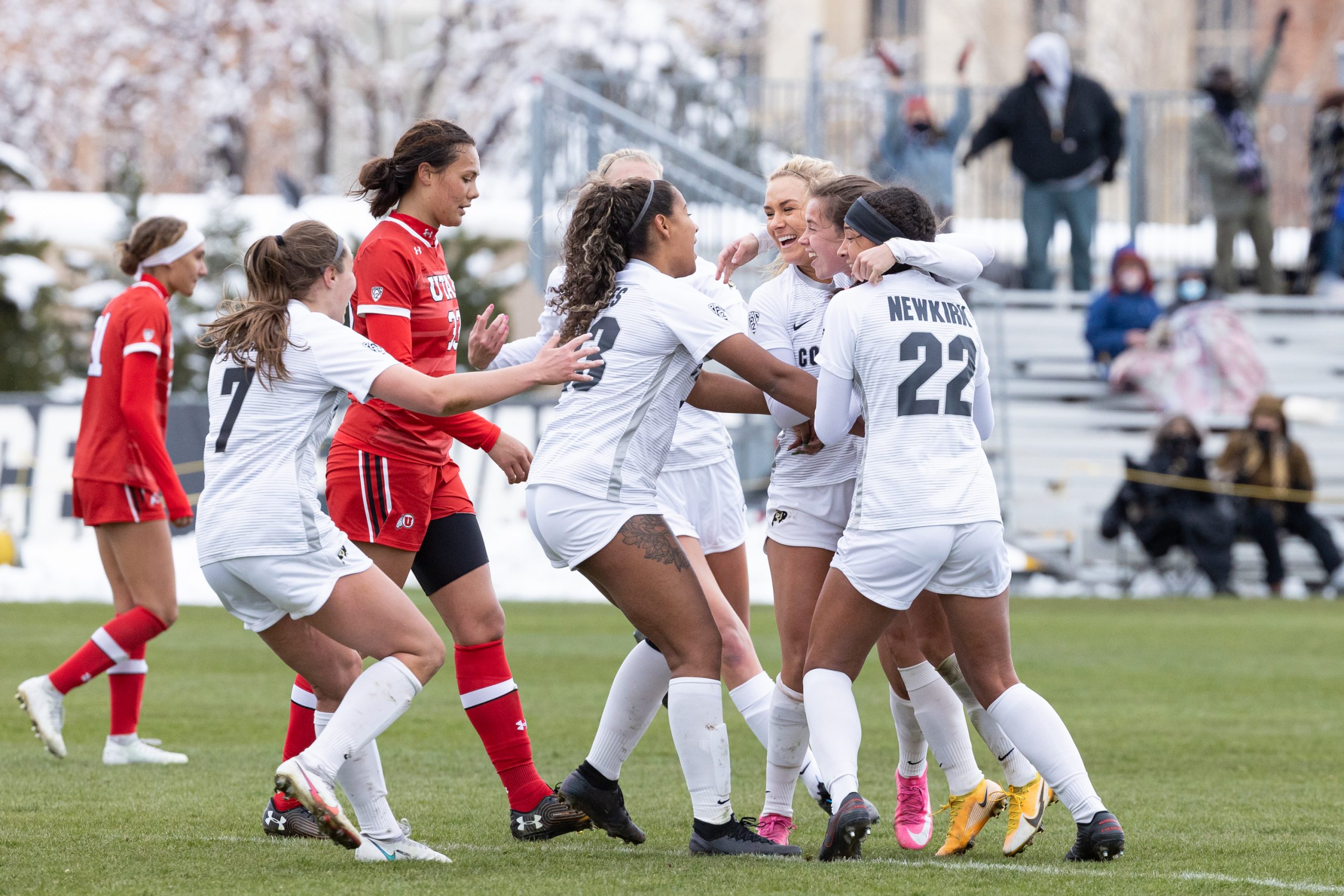 The Buffs celebrate a goal by senior midfielder Shanade Hopcroft during the 82nd minute of play at Prentup field. April 16, 2021 (Nigel Amstock/CU Independent)

The 2021 senior day was a special one for the University of Colorado soccer team. On Friday, the Buffs honored junior forward Libby Geraghty, who won’t be returning next season, and senior forward Katie Joella. In Geraghty’s final home game at Prentup Field, she scored a critical first half goal that helped propel the Buffs to a 2-1 win over Pac-12 rival Utah.

Perhaps normally this matchup would only carry the weight of a rivalry game, however, the now 9-5-2 (5-4-2 Pac-12) Buffs were also playing for one of 48 spots in the NCAA tournament. Although Utah (4-9-3, 3-6-2 Pac-12) was likely well out of the postseason picture entering Friday, the Utes were still looking to spoil their rival’s postseason hopes.

Both of the teams entered as two of the hottest teams in the Pac-12. CU had gone undefeated in its last three games, with a record of 2-0-1. The Utes, meanwhile, carried a two-game win streak into Friday with a home sweep of Arizona and Arizona State.

With the win, head coach Danny Sanchez is fairly confident that Colorado will be selected on Monday for the NCAA tournament. He said that playing in a strong conference could bode well for their resume. 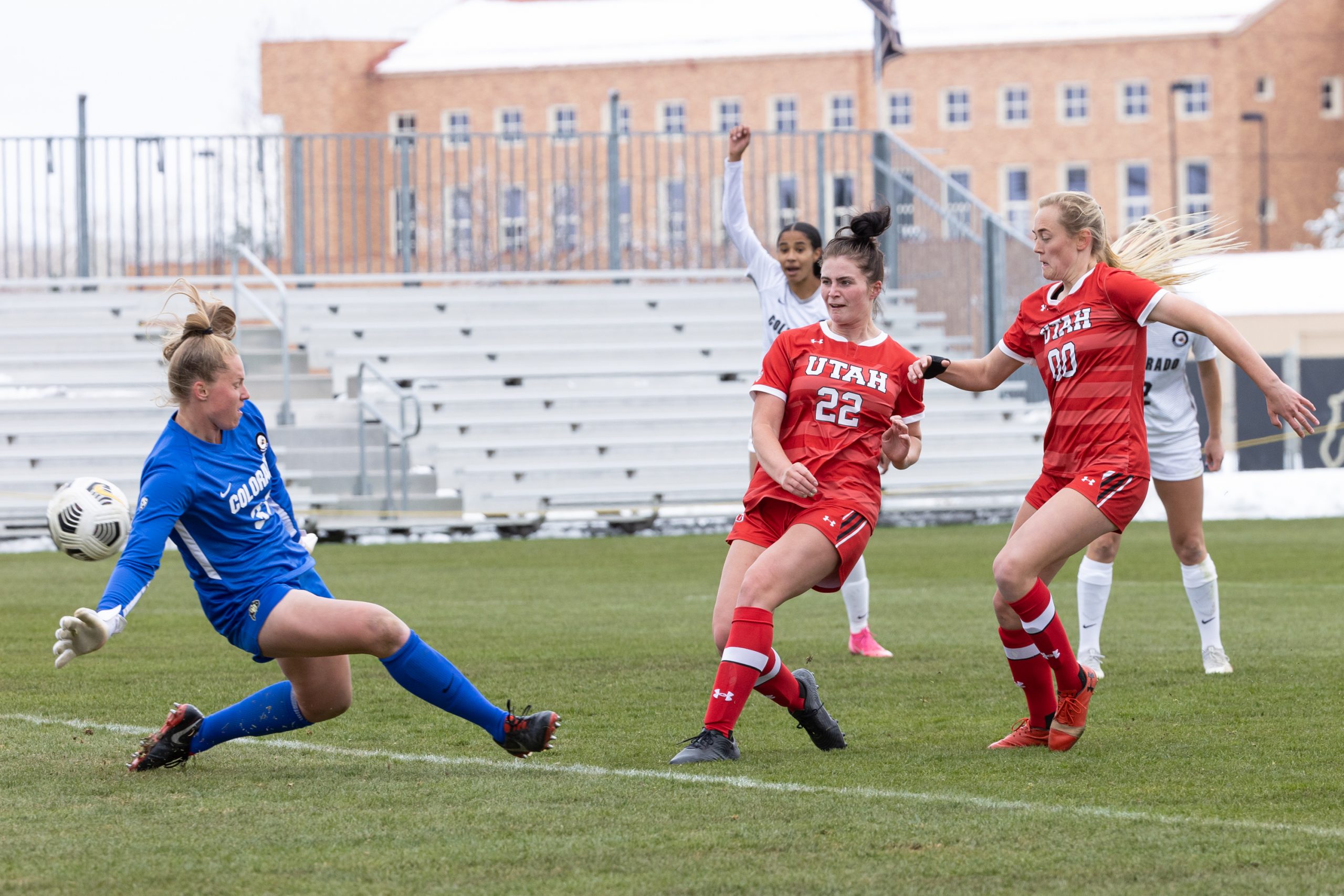 CU goalie Dani Hansen misses a shot by Utah midfielder Kaylee Coatney during the 12th minute of play. The goal was waved off due to a Ute offside. Prentup Field. April 16, 2021 (Nigel Amstock/CU Independent)

Although the Buffs got the win, the game didn’t start out strong for CU. The Utes controlled the ball early producing a good run of scoring chances. In the 12th minute, it even appeared that the Utes had scored a goal but it was quickly waved off as  Utah was offsides on the play. Ten minutes later, Utah struck again and this time it wasn’t waived off. A crossing pass from the left side of the field by Courtney Talbot hit Eden Jacobson who was uncovered in the box. With sophomore goalkeeper Dani Hansen on the right side of the net, Jacobson tapped the ball on the ground towards the empty left part of the goal giving Utah the early 1-0 lead. 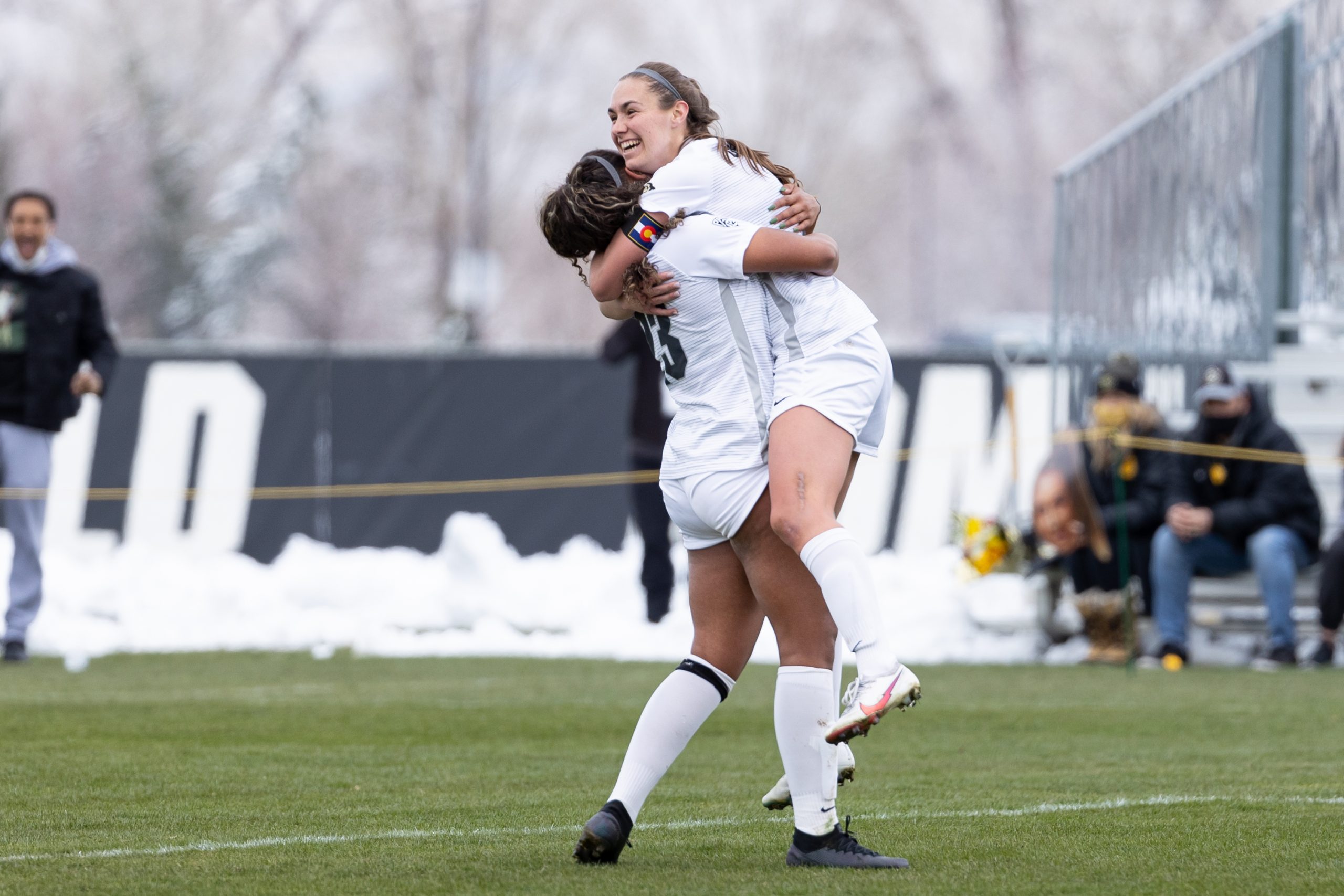 The Buffs didn’t hold their heads low for long as they quickly responded with their own goal in the 25th minute. Senior transfer midfielder Shanade Hopcroft kicked a long pass from the midfield line towards Geraghty who was streaking down the left side of the field. Geraghty ran past the defenders and with Utah’s goalkeeper SJ Edwards charging to meet her, she hit the ball around Edwards and at the right part of the goal. The goal was unguarded and the ball entered the net to tie the game. The goal was Geraghty’s second of the season and was a special moment on her senior day.

“It has been a long four years and I couldn’t have asked for a better senior day,” Geraghty said. “We needed that goal; the equalizer was important before halftime.”

For the remainder of the first half and for large parts of the second half, neither team got in a sustained rhythm. Chances for both teams were few and far between. During this stretch, Hansen collected a few saves but they weren’t on particularly dangerous shots from the Utes. 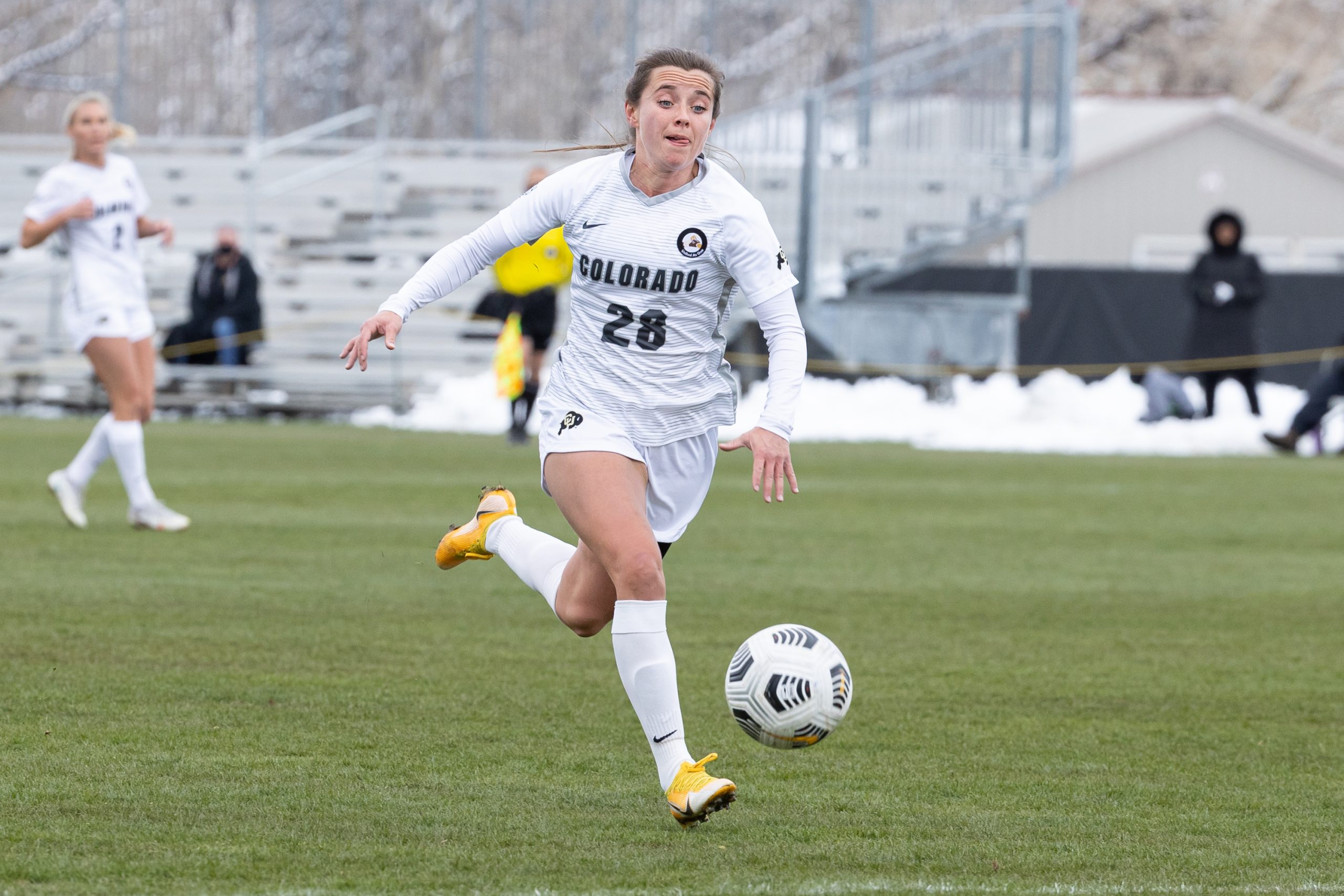 Senior midfielder Shanade Hopcroft drives the ball down the field during the first half of play at Prentup field. April 16, 2021 (Nigel Amstock/CU Independent)

As time continued to tick away, it looked more and more likely that neither side would be able to break the draw. That was until the 83rd minute. After the Buffs were awarded a free kick just within Utah’s half of the field, freshman defender Lawson Willis sent a long arching ball towards the goal. The ball hit off a melee of players and bounced right to the charging foot of Hopcroft who sent a laser towards the goal. The ball flew along the ground and was hit too fast for a diving Edwards to stop. The Buffs erupted with cheers and shouts as the goal put them up 2-1.

After the goal, the Utes scrambled to score a goal of their own. It was simply too late for Utah who wasn’t able to get a shot on goal in the final seven minutes.

As the final horn sounded, the celebration started for CU. The Buffs had run the gauntlet by finishing their last four contests with a 3-0-1 record. With the regular season finale win, the Buffs will now hope for a spot in the NCAA tournament in late April. 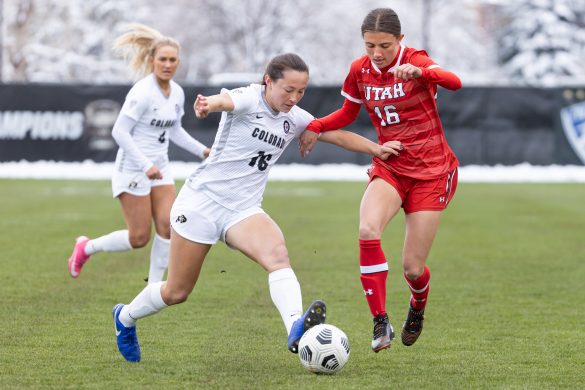 Sophomore midfielder Jade Babcock-Chi looks to get the ball around a Utah defender during the first half of play at Prentup field. April 16, 2021 (Nigel Amstock/CU Independent) 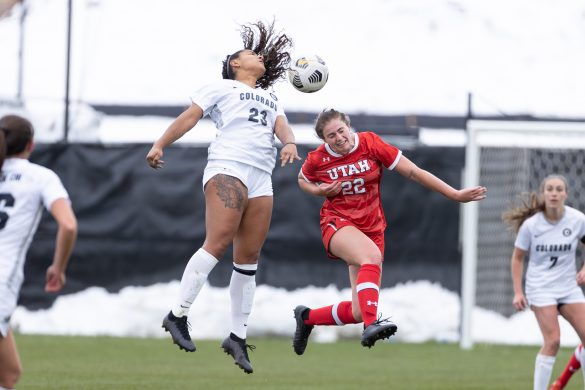 Freshman forward Shyra James and Ute midfielder Kaylee Coatney elevate for a header during the first half of play at Prentup field. April 16, 2021 (Nigel Amstock/CU Independent) 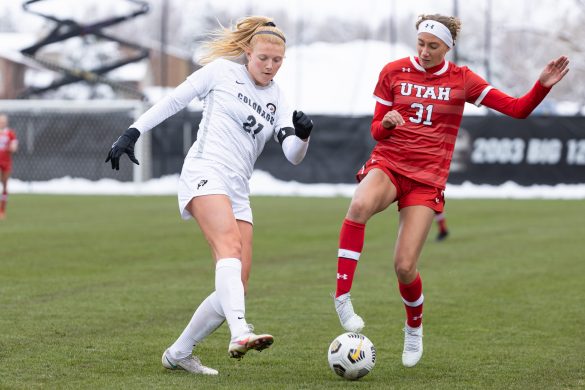 Junior defender Hannah Sharts looks to get the ball out of the Buffs side of the field during the first half of play at Prentup field. April 16, 2021 (Nigel Amstock/CU Independent) 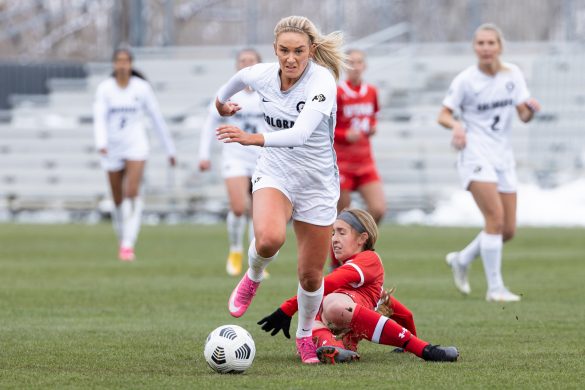 Sophomore forward Tessa Barton drives the ball down the field past a Ute defender during the first half of play at Prentup Field. April 16, 2021 (Nigel Amstock/CU Independent) 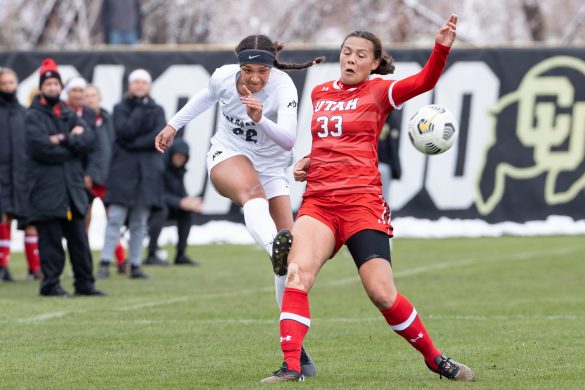 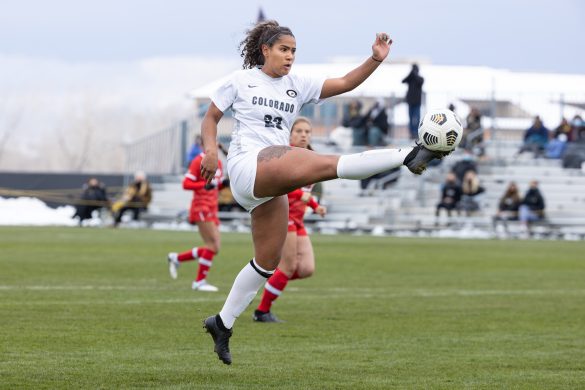 Freshman forward Shyra James looks to take a shot on goal during the first half of play at Prentup field. April 16, 2021 (Nigel Amstock/CU Independent)