Artist Robert Pruitt discussed his artwork and the Black experience 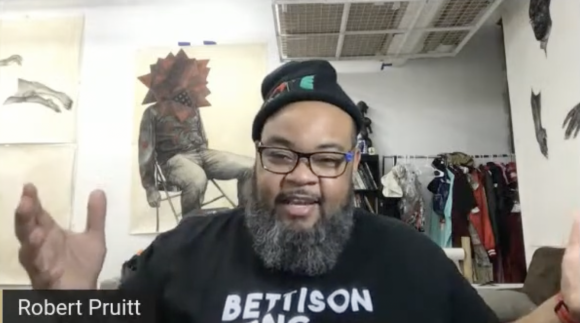 Visual artist Robert Pruitt led a virtual lecture on April 6, the final speaker in an artist talk series hosted by the University of Colorado Boulder Arts and Art History Program. The lecture focused on his personal artwork, which addresses the Black experience in America through large-scale drawings and multi-media work.

Pruitt began his art career by creating paintings in college, but quickly developed a passion for drawings. In graduate school, Pruitt began to invest the majority of his creativity into large-scale graphite drawings.

“I like drawing because it’s very much in my control. I love that you can see the linework and the movement,” Pruitt said. “That’s the magic of drawing; both its making and its wholeness is immediately visible to the audience.”

Not only are the drawings themselves magical, so is Pruitt’s creative process. Pruitt brings people into his studio to model where he dresses them in intricate outfits and wigs. After the ideal image is captured, the drawing begins, going back and forth between the captured image and the artistic expression of it.

“When you see the final drawing, this part of the process might not seem necessary, but I just need to see and visualize it,” Pruitt said. “The process helps me capture a moment of that figure’s world, a peek into their universe.”

Each piece is seven by five feet, spanning above Pruitt’s height. The large-scale drawings are surfaced on stained paper, achieved through a variety of methods from tea and coffee stains to fabric dye.

“I wanted to go against white neutrality as a starting point,” Pruitt said. “I love the color in the background as a type of meaning for myself.”

Pruitt’s works assess the Black experience in America through the artistic exploration of identities, history and destiny. Each of his drawings focuses on one specific character, telling intricate stories one person at a time.

“There is a sense that the characters I draw form this world in my mind; a liberated Black populace that exists in my imagination and hopefully exists in real life someday,” Pruitt said.

Pruitt gains inspiration from other African American artists preceding him, including Ernie Barnes and Aaron Douglas. Pruitt gained other major inspiration from comic books, which he grew up reading as a child. One series of Pruitt’s work displays characters clad in superhero costumes and paraphernalia, drawing parallels to popular Marvel comics.

“Comics introduced me to really grand existential ideas early on. It’s the concept of a fictional world being present in a very real way,” Pruitt said.

Other works of Pruitt’s are more interactive, with multimedia elements of sound and visual. These works, entitled “Rearview Mirror” and “Meteorite” incorporate experimental jazz music and recorded voice audio along with the drawings.

Currently, Pruitt continues to draw and has more recently re-incorporated paint into his works. His art career presses on as he continues to communicate valuable messages about culture and identity.