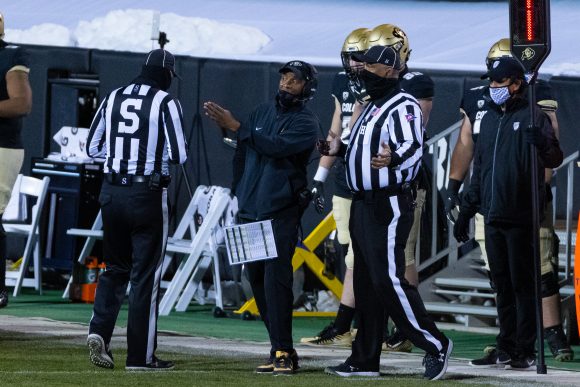 The University of Colorado football team is hoping for an extra boost in leadership with five coaching adjustments ahead of the 2021 season. Each of the newly-positioned coaches looks to use their expertise to help make the Buffaloes a stronger team moving forward.

“I believe in simplicity and execution, and I am trying to meet the players where they are now in order to prepare them for spring as our first task,” Turley said. “It’s something that will take time, something that will take years. It doesn’t happen quickly. Productivity and efficiency are high priorities and we hope to build on it every single day. Teaching is the most important step in the process and making sure the players understand what we’re asking them to do.”

Along with the addition of Turley, assistant coach Brett Maxie was promoted from safeties coach to the defensive passing game coordinator. Hired in March of 2020, it took Maxie less than a year to find himself working his way up the ranks of the CU coaching staff. Originally included as part of head coach Karl Dorrell’s inaugural coaching staff, Maxie played professional football for 13 years and was on a total of seven NFL coaching staffs prior to coming to Boulder. As a defensive backs coach with the San Francisco 49ers, Maxie oversaw a total of 66 interceptions between 2001 and 2003, third most in the NFL during that timeframe.

“When coach Dorrell and I sat down and talked about this opportunity, he wanted to take advantage of my strength, which is the passing game,” Maxie said. “That’s what I have been doing since my sophomore year of college (at Texas Southern), playing the game from the secondary. Now I’m going to have the opportunity to incorporate some of the things that I’ve done in the past because I have been to so many different places and have worked with so many great coaches that I get an opportunity now to express some of those ideas.”

As with Turley and Maxie, Dorrell looked to place assistant coach Chris Wilson in a place that highlighted his strengths. Wilson was hired in February 2020 as a defensive line coach and in January, Dorrell added defensive coordinator to Wilson’s responsibilities. A member of CU’s coaching staff from 2000 to 2004, Wilson helped the Buffs win three Big 12 North Division titles (2001, 2002 and 2004) and the 2001 Big 12 championship. In his career, Wilson coached for the NFL’s Arizona Cardinals and Philadelphia Eagles. While coaching the Eagles defensive line, he won Super Bowl LII in 2017.

“We have a plan, and it’s built around our players,” Wilson said. “The things that they can do well, we want to make it difficult for offenses and simple for us. We’re big on helping guys understand concepts, we definitely have a plan going forward that is player-based. Systems only work to get players, so we are going to be custom tailors and great teachers in regard to who our top players are.”

Another key addition to the coaching staff is inside linebackers coach Mark Smith who was hired by CU in February. Smith has a strong resume of college coaching experience having worked for a total of four programs including Oklahoma, SMU, Arkansas and Long Island University. He worked alongside Wilson, who was a defensive ends and special teams coach, with Oklahoma from 2008 to 2009.

“I think you learn something everywhere you go,” Smith said. “Communication is critical in really every line of work, especially in what we do. I try to be transparent, upfront, open and honest with everything … I want to get to know them and communicate with them, the more we talk the more we know each other, the more we know what we expect from one another.”

The last change made on the CU Buffs coaching staff for the upcoming season is with assistant coach Bryan Cook. Originally hired as the director of quality control for the defense in 2019, Cook was recently promoted to tight ends coach in February. His resume includes stints at Georgia Southern, Georgia Tech and Cal Poly. While he has focused on defense the last two seasons at Colorado, he also holds experience as an offensive coordinator and quarterbacks coach. He will now transfer his knowledge to the tight end position.

With two new coaches and three position changes for returning coaches, the Buffaloes look to make another strong run in the Pac-12.