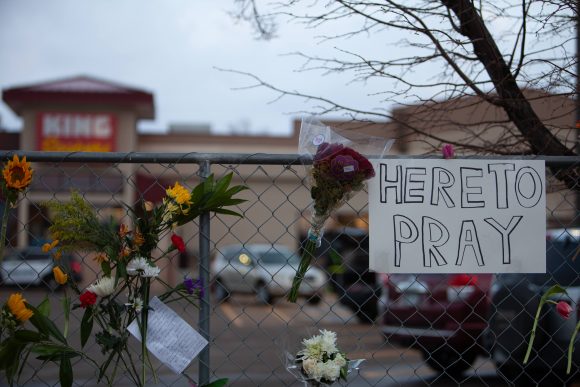 Signs and flowers rest on the fencing outside the King Soopers that was the site of a mass shooting Monday. (Alec Levy-O’Brien / CU Independent)

Editor’s Note: The names of the ten killed on Tuesday will not be included in this article. Boulder Police have not confirmed whether or not the families of the victims are comfortable with this information being public and have asked the media to respect the privacy of those who have lost someone close.

Dozens of Boulder residents gathered at a memorial Tuesday, March 23 to pray and to honor the ten people killed in a mass shooting Monday.

Alongside one police officer, Eric Talley, the nine victims ranged in age and occupation. One victim was just 20 years old and the oldest was 65.

South Boulder residents had a strong connection to the store and the people who worked there.

“It’s the grocery store that my family shops at, once a week if not more. You know, I used to hang out after school at that grocery store, starting in middle school,” said one local resident, Emberline Fernandez.

She, like many others, couldn’t believe that the unthinkable had happened.

Early Tuesday morning, citizens in the South Boulder area began to leave flowers and signs on the chainlink fence that now surrounded the scene.

Stephen Parlato, a Boulder resident of 3 years, stood outside the King Soopers on Table Mesa that morning. He held a sign protesting the lack of gun laws in Colorado. Parlato explained that he felt sick and angry when he heard the news.

“There is so much that could be done,” Parlato said. “It’s a tragedy. There is no excuse for the inaction that continues.”

He would not leave the fence until just after 7 p.m. that night.

As time went by that day, the names of the dead were released. More and more people brought bouquets of flowers, signs and flags to hang on the fence. 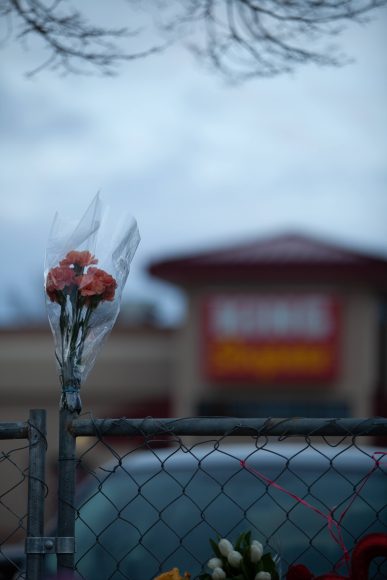 A single bouquet sits atop the police fence outside the grocery store. (Alec Levy-O’Brien / CU Independent)

Cristina Geck and Bill Bergen, neighbors, brought one such sign that they wrapped between the gaps in the metal.

They live just a mile away and said they knew the people who worked at the shop and thought fondly of them.

Fine said that she went to see the memorial on Tuesday because, “there’s been a lot of (shootings) where I couldn’t, like, be there.”

She hoped that being there would help to address the feelings that have built up over the past years, and in the most recent hours.

The Lutheran Church Charities organization sent representatives and service dogs to stand at the memorial and provide comfort to those who needed it. The ultimate goal of their efforts was to help those who needed to relieve some of the stress that had built up from the intense emotion at the scene.

Those emotions of grief, loss and sadness were shared by many, including Camila Ballamil and Diego Mendiola. The two walked together down the quiet street. Like so many others, they shopped at this store and this tragedy felt personal for them.

“It could (have been) anyone from the community,” said Mendiola. “So it’s something hard to see.”

Among the crowds — those praying at a series of crosses, crying privately or talking with one another — was a small yellow sign. Zip tied to the fence, it read, “Never Forgotten: May your families find peace and cherish the love you brought to the world.” 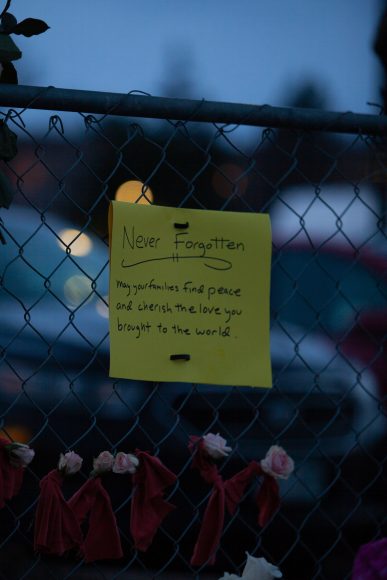 A yellow sign on one portion of the fencing. (Alec Levy-O’Brien / CU Independent)