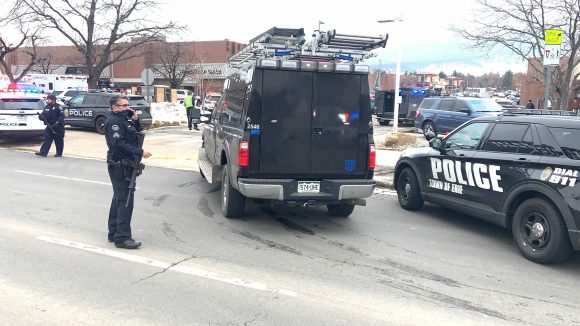 At 2:49 Boulder Police tweeted out an alert: “Active Shooter at the King Soopers on Table Mesa. AVOID THE AREA. PIO is en-route.” The store is located only a few miles from the University of Colorado Boulder campus. Boulder PD has reported 10 fatalities including Officer Eric Talley.

Police units from across the state including Jefferson County, Erie, Longmont and West Metro SWAT as well as FBI and ATF units responded to the scene to support Boulder PD. SWAT teams began to leave the area around 4:30.

Shortly after, Boulder PD asked people near 17th and Grove to “shelter in place while they respond to report of armed, dangerous individual” in a tweet this evening around 5:30.  Boulder Police have since lifted this order. As of now, Boulder PD believes this event was unrelated.

The police have the suspect in custody who is said to be seriously injured. Boulder PD has yet to confirm the suspect’s identity.

“We are gonna go all out to ensure that the right result is reached,” said District Attorney Michael Dougherty, noting that a painstaking investigation is already underway. The investigation will take at least 5 days.

A reunification center has been set up in the CU Event Center for families looking for missing or unaccounted for relatives. Boulder PD said in a recent tweet.
Witnesses who have yet to speak to the police are asked to contact Boulder PD at 303-441-3333.
Please feel free to reach out to resources on campus through CAPS as our community processes this tragedy.
This story will be updated as information comes in.
Contact CU Independent Breaking and Senior News editors at Henry.Larson@colorado.edu and Mairead.Brogan@colorado.edu.