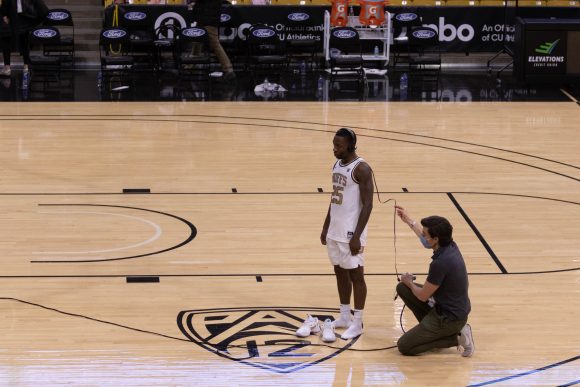 It was CU’s 20th win of the season, the eighth 20-win season of head coach Tad Boyle’s tenure in Boulder. The Buffaloes also set a mark of 14 Pac-12 victories, the most since they joined the conference in 2011.

Senior guard McKinley Wright IV, who was playing in his final game at CU Events Center, led the team with 24 points, 17 of which came in the second half, to go with four rebounds and four assists. He got his proper send-off with 18.6 seconds remaining in the game when he checked out and embraced Boyle. In normal times, it is safe to assume Wright would have received a raucous ovation from the CU faithful.

“This gym means so much to me,” Wright said. “I’m hurt that it’s my last game here, but I left everything I had.”

In what was a back-and-forth game through the midway point of the second half, CU held a 54-50 lead with 9:26 remaining in the game. It was a good time for the Buffs to have their best stretch of the game, as they went on a 10-1 run to take a 64-51 lead. The Buffaloes were able to keep that lead in the home stretch and claim the win versus Arizona State.

But to start the game, CU’s offense was slow out of the locker room. Wright made the team’s first basket at the 17:32 mark and CU would not score again for another six minutes. However, the Buffs’ defense was able to stifle the ASU offense early, as the Buffs only trailed 12-8 halfway through the first half. Turnovers were also a glaring issue for the Buffaloes, which led Boyle to get fired up on the bench. 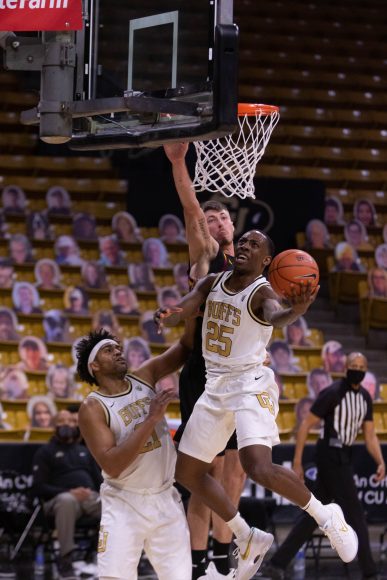 Senior guard McKinley Wright IV jumps up for a layup during the second half. Wright ended the night with 24 points at the CU Events Center. March 4, 2021 (Kara Wagenknecht/CU Independent)

“I didn’t feel like I had any other choice,” Boyle said.

Offensively, Colorado would get going throughout the rest of the half. The Buffaloes took their first lead of the game, 27-26, with just under three minutes remaining in the first half. They would also get a basket from freshman forward Jabari Walker with five seconds left in the first half to lead 31-30. Colorado shot 42.9% in the first half but was held back by 10 turnovers.

Despite the halftime lead, Boyle chided his team for playing “soft” in the first half.

“We were soft passing the ball,” Boyle said. “We were soft defensively. We were lucky to be up by one at halftime.”

The Buffaloes did not need Boyle’s emphatic encouragement at halftime to respond. To start the second half, the Buffs were able to get points from the free throw line, which translated into baskets. CU’s offense started to make shots as they went on an 8-0 run to take a commanding and final lead.

“We picked each other up,” senior guard D’Shawn Schwartz said. “It was a very enthusiastic second half and we played together.”

Colorado cleaned up the turnover issue in the second half as well. After 10 turnovers in the first 20 minutes of the game, they only had three in the second half. The Buffs also played excellent defense in the second half, holding the Sun Devils to 30% shooting. Led by Wright and senior forward Jeriah Horne, who picked up a 12 point and 12 rebound double-double on Thursday, CU has consistently brought the offense this season. But in recent games, it has been their defense that has played a huge role as they look towards the Pac-12 Tournament.

The Buffaloes will have an opportunity to translate this consistency on defense into success in the Pac-12 and NCAA Tournaments. Boyle stated that there is no room for error as the Buffaloes enter postseason play.

Colorado will be the third seed in the Pac-12 Tournament as long as Saturday’s USC-UCLA tilt at the Pauley Pavilion is played. If the game is canceled due to COVID-19 protocols, the Buffs will be the fourth seed in the tournament.

The Buffaloes played together in the second half of tonight’s game. They will need to play together to have success in March. 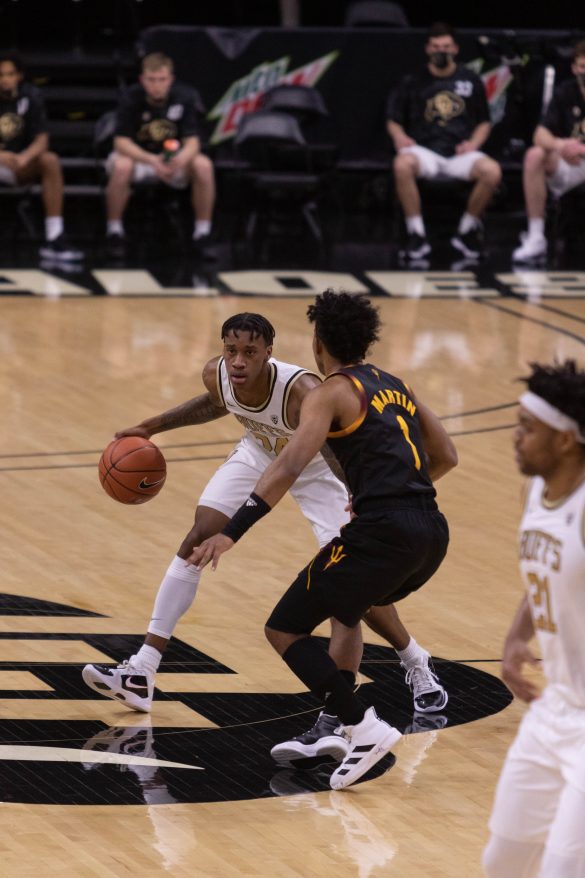 Junior guard Eli Parquet looks for an open teammate to pass to during the first half at the CU Events Center. March 4, 2021 (Kara Wagenknecht/CU Independent) 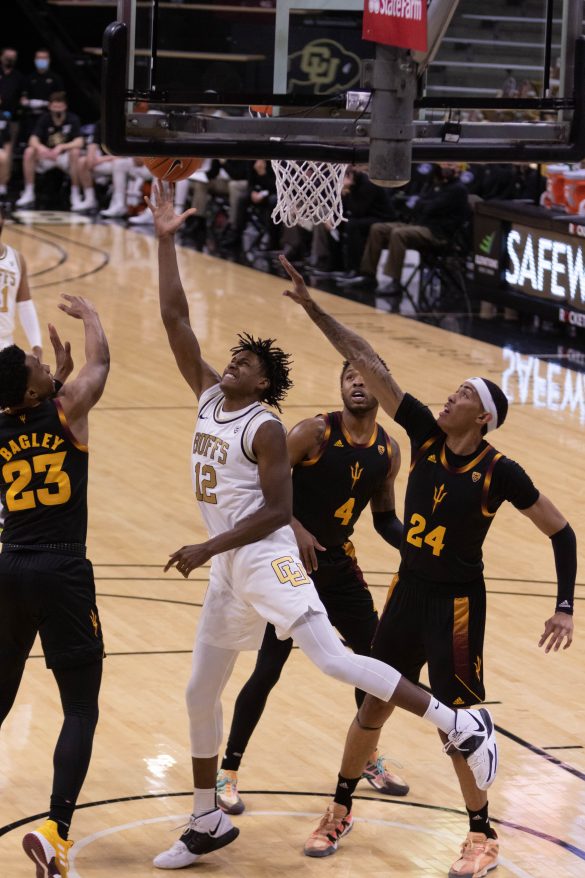 Freshman forward Jabari Walker leaps in hopes to add two points to the Buff's score during the first half at the CU Events Center. March 4, 2021 (Kara Wagenknecht/CU Independent) 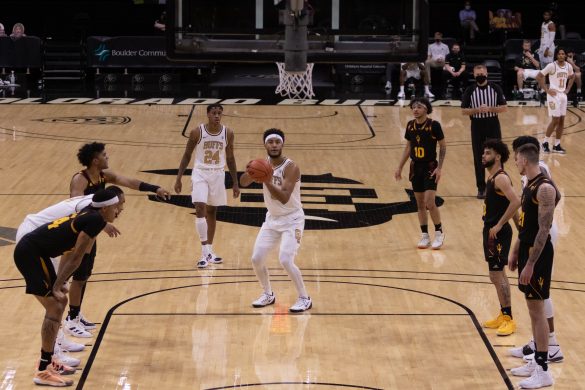 Senior forward D'Shawn Schwartz prepares for a free throw after getting fouled by Arizona State during the first half at the CU Events Center. March 4, 2021 (Kara Wagenknecht/CU Independent) 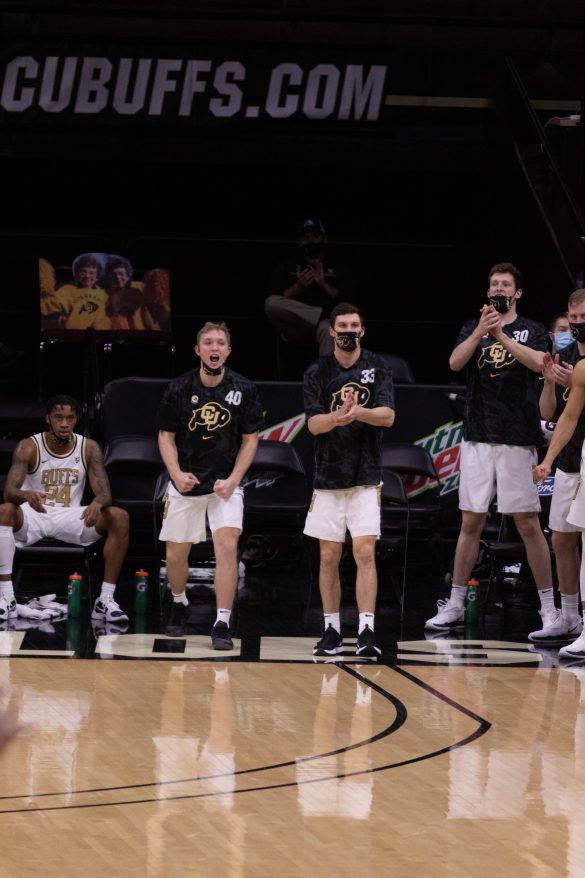 The Buffs erupt in cheers after their teammates scored during the first half at the CU Events Center. March 4, 2021 (Kara Wagenknecht/CU Independent) 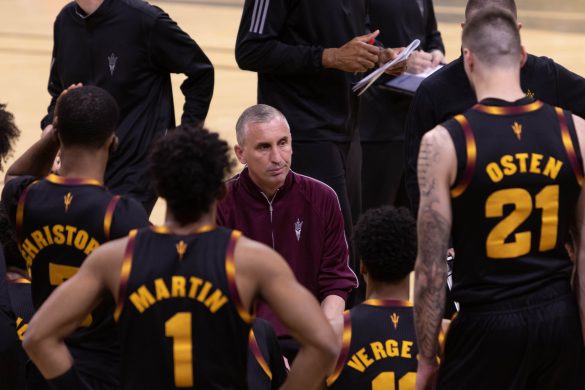 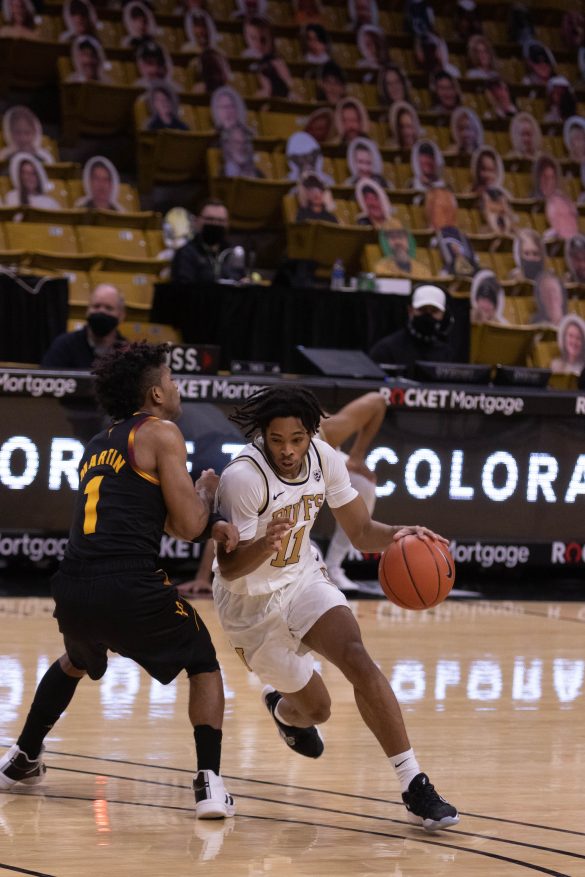 Freshman guard Keeshawn Barthelemy drives towards the basket during the second half at the CU Events Center. March 4, 2021 (Kara Wagenknecht/CU Independent) 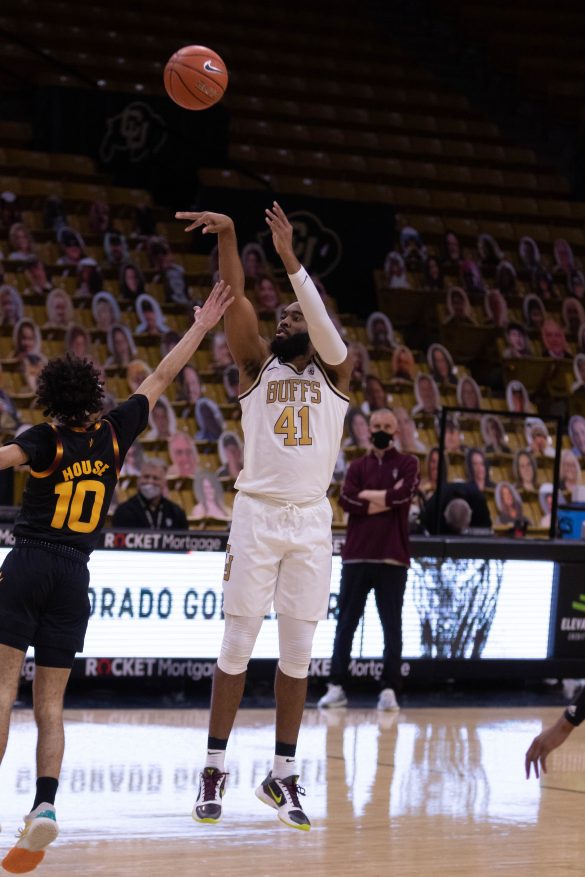 Senior forward Jeriah Horne drills a three-pointer during the second half at the CU Events Center. March 4, 2021 (Kara Wagenknecht/CU Independent) 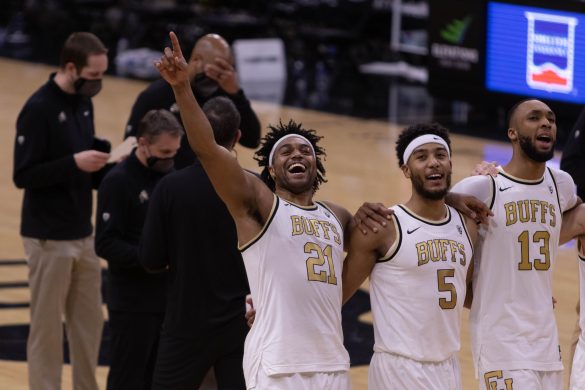 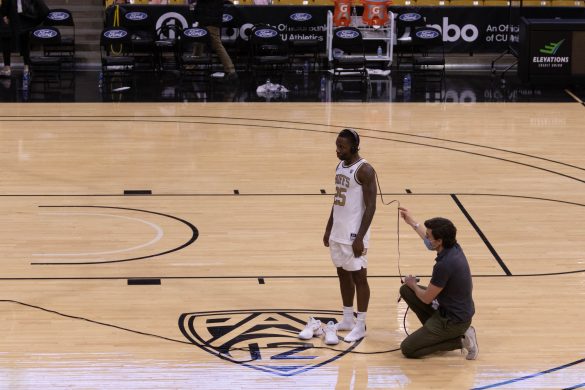 Eric Bean is an undergraduate journalism major at CU Boulder, minoring in Sports Media. In his free time, Eric enjoys playing the piano or a game of Madden. Eric has covered Buffs sports since August of 2019, and joined the CU Independent in January of 2021. Contact: Eric.Bean@colorado.edu | Twitter @ebeancubuff

Buffaloes’ historic season comes to an end with loss...

Buffs to challenge Florida State in second round on...

Colorado dismantles Georgetown in first round of the NCAA...