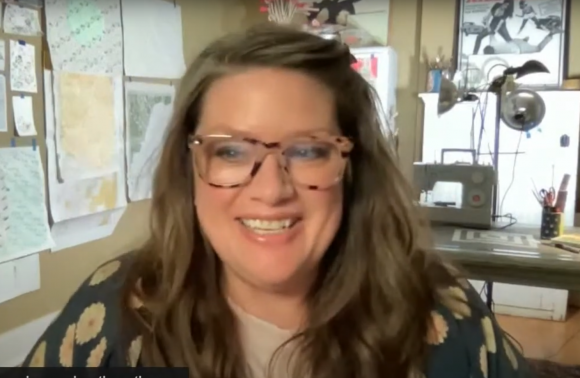 Visual artist Rebecca Vaughn led a virtual lecture Feb. 17 which was hosted by the University of Colorado Boulder Arts and Art History Program. The lecture focused on her personal artwork, which addresses themes of relationships, femininity, and love through a mixed media approach.

Vaughn’s interest in art started as a student at the University of Colorado Boulder. Vaughn was a French major who was not interested in art until impulsively deciding to take an elective sculpture course.

“I just wanted to try something fun and different,” Vaughn said. “I loved the energy in the studios late at night and the community. I loved trying something I was bad at.”

During her pursuit of art as an undergrad, Vaughn got involved at art galleries. First, she worked as an assistant at the CU Art Museum, which then led her to other gallery jobs, including the Robischon Gallery in Denver.

“I really got the bug on working in a gallery, and seeing what it would be like to assist artists,” Vaughn said. “They were intense jobs. They were the way that I got to see the utmost professional manner one could be in their art practice.”

During her work at galleries, Vaughn continued to create her own art pieces. Many of her early works incorporate crocheted and hand-knitted materials.

One early piece entitled “Lure” is a collection of handmade pieces inspired by Vaughn’s search for her biological mother. The small handmade pieces are infused with Vaughn’s scent and pheromones, and then given to other women to wear. Vaughns hope was that her mother would be subconsciously drawn to this scent and that Vaughn would perhaps make contact with her mother in this way after so many years.

Vaughn still has not found her mother but holds out hope that through the continuation of this project, she will be able to.

“For this piece to work I  really have to hold onto this idea that this crackpot scheme of sending your smell into the world could work,” Vaughn said.

After her work with crocheted pieces, she began to experiment with other materials such as lights, wires, tulle and ladders. Despite the experimentation, Vaughn still felt a desire for something new.

“I grew disillusioned with my work,” Vaughn said. “So I started to think about how I could disrupt my compulsion to wrap things up with a bow.”

To combat this comfortability with her work, Vaughn stepped outside of her comfort zone again with new artwork. After the unexpected death of her father, Vaughn created a series of sculptures dedicated to him using pieces of her father’s train set.

“It was like having a conversation with my deceased father,” Vaughn said. “It involved these falling apart, cut up, crumbling remnants of my father’s identity, which became very powerful for me.”

Vaughn continued this series by incorporating details and decorations from her childhood home. The pieces were based around Vaughn’s relationship with her father, as well as reflections on her experience as an adopted child.

When asked about advice for aspiring artists, Vaughn urged students to get comfortable disliking their work, to always document their art, and to apply to every opportunity available. Vaughn also commented on one of her mentors throughout college, Antonette Rosato, who said,  “If it makes you feel uncomfortable, then it’s worth investigating further.”

“In my whole upbringing, I had never heard that my discomfort should be my compass. I was always told to go towards what made me feel good,” Vaughn said. “And yet, it was Tony who urged me to try something awkward, attempt something that I was bad at, make something that looked ridiculous.”

Currently, Vaughn continues to create artwork and is involved in art nonprofits. She also works as an art teacher.