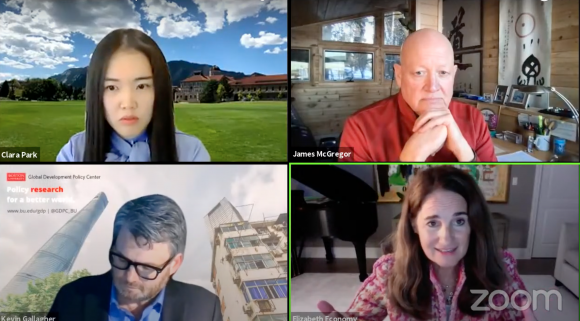 The University of Colorado Conference of World Affairs held a virtual panel on Tuesday where they addressed the role China would be playing on the world stage during the Biden administration’s presidential transition. The panel was a part of CWA’s three-day seminar on international affairs and the next presidential administration and was held amid rising tensions between the United States and China.

“China invests more in renewables than any other country,” Economy said. “I do think that there will be a push to try to find areas of cooperation on climate change.”

The panel hoped to address how China and the United States can move on from the events of 2020, which have been incredibly damaging to the relations of the two countries. The three panelists agreed that the most likely avenue for cooperation will be the looming climate crisis.

Economy went on to state that she believes there will be a push from the Biden Administration to continue the work that former President Obama was able to accomplish, some of which was undone by former President Trump. However, both Economy and Gallagher spoke up regarding the inconsistency China has shown in the renewable energy field.

“China has built a pretty robust green bond market,” Gallagher said. “It started out pretty bad, you could actually finance a coal plant with a green bond.”

Gallagher said that while China may lead in renewable energy and electric vehicles, they are lagging behind the rest of the world in other areas, like water pollution.

McGregor agreed, saying “the cleanest water I saw while living in China came out of a bottle.”

While the United States currently has the world’s largest overall economy, McGregor couldn’t help but wonder if it was too late for us to retain that title.

“I would ask the question: can we do it, or is this the end of empire?” McGregor said. “We were doing what China was doing, but have we been fat and happy and rich too long to make any sacrifices?”

“I don’t think we suck,” Gallagher countered. “I think our ideals are the best in the world and that we have always struggled to meet them, but we’ve always tried hard.”

Gallagher also said it is time for the United States to stop “playing around” as there is actual competition in the form of China now entering the world stage.

Both Gallagher and Economy expressed faith in the American economy, as well as the Biden administration, pointing out transportation secretary Pete Buttigieg’s plan for a “big and bold” infrastructure plan.

Economy said that the United States also has an ace up its sleeve.

“There are other things that countries are interested in investing in, like innovation, where the United States is still a global leader,” Economy said.