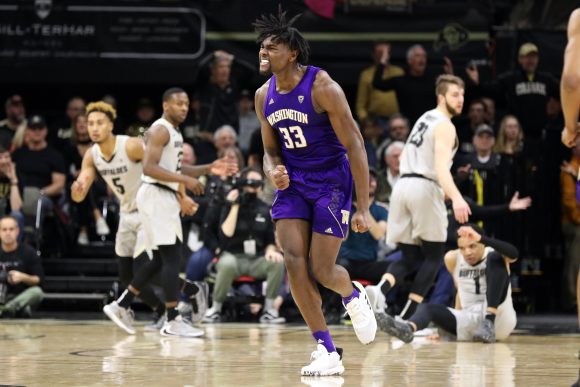 Washington forward Isaiah Stewart celebrates a basket during the first half of play at the CU Events Center. Jan. 25, 2020 (Nigel Amstock/CU Independent)

Head coach Tad Boyle called the loss, “one of the most disappointing losses of my career.”

Three-point shooting determined this game. Washington set the tone from deep, going 12-of-25 from the arc. Meanwhile, the Buffaloes’ mustered just one three-point make on 18 attempts.

“The threes we took were good looks,” Boyle said. “They just didn’t go down tonight.”

On defense, Boyle alluded to four instances where the Buffs “gifted” Washington threes. Boyle added that the Buffs struggled all night with ball-screen defense.

Despite the defensive struggles, the Buffs found themselves down 83-80 with a chance to tie the game. With eight seconds left, senior forward Jeriah Horne got an open look from three but couldn’t connect. The theme of the night of missing threes held true, as the shot rimmed out of the basket. After the game, Horne said he felt confident in the shot he was given.

“I believe I would knock that shot down nine out of ten times,” Horne said.

It was a letdown for the Buffs, who were coming off a huge 3-0 week and were looking to build upon the success they reveled in.

The game started decently for the Buffaloes. Both junior forward Evan Battey and Horne asserted themselves on the offensive end, as both ended the first half with 12 points. Colorado used a 10-0 run early in the first half to take a 21-13 lead. Washington hung tough, as they kept up with the Buffs throughout the half.

The first half saw both good and bad for the Buffaloes. They shot 49% but did not make a single three-point shot (0-of-8). Colorado had zero turnovers, but senior guard McKinley Wright IV, senior guard D’Shawn Schwartz and freshman forward Jabari Walker each had two fouls. The Buffaloes took a 40-36 lead into the locker room.

Coming out of the break, the game had a frenetic pace. Washington’s offense caught fire, but Horne continued to lead the Buffs on offense. CU maintained a 55-50 lead through the first five minutes of the second half.

The outside shot was simply not there for the Buffaloes and they started reeling a bit. Washington would take the lead, but the Buffs fought back to take a three-point advantage.

In the final seven minutes, the Buffaloes mustered only three made field goals. That is not the recipe for victory. The Buffaloes had a hard time stopping Washington sophomore Marcus Tsohonis, who finished with 27 points on 9-of-13 shooting. The Buffaloes needed someone to cancel Tsohonis out, but they did not get it. Boyle praised Tsohonis after the game, saying that he is really tough to stop when he gets it going.

Colorado had four turnovers in the last five minutes but scratched and clawed to be in the game until the very end. Horne’s three-point miss summed up the night for the Buffaloes.

After a near-miss from making the AP Top 25 this week, CU was not able to silence the doubters on Wednesday night. Nonetheless, teams experience losses like these. Horne alluded to the fact that every team he has been on has had a loss like the one the Buffs had tonight.

After a tough loss like tonight, Boyle said he wasn’t going to “burn the tape.” Rather, he sees this game as a learning experience.

“Let’s learn from this, let’s understand (why we lost),” Boyle said.

Junior forward Evan Battey echoed the sentiments of his coach. “We will see if we have the mental toughness and mental focus to bounce back,” Battey said.

The Buffaloes will get their shot to bounce back Saturday at Washington State (6 p.m. MST, ESPN2).