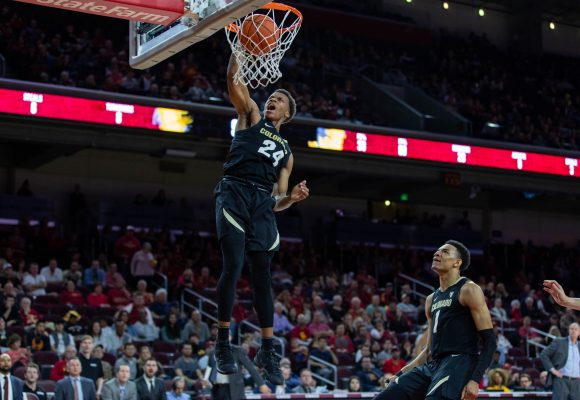 Amidst the CU Buffs’ recent success during a COVID-19 ridden season, head coach Tad Boyle has needed every one of his players to be at the top of their game. Guard Eli Parquet is no exception. The 6-foot-3 junior from Beaumont, Texas is undoubtedly pulling out his best season in Boulder.

Not only is Parquet among the team leaders in blocks, averaging 0.7 per game, but he has shot 46% from the field and 35% from three to lead the Buffs to an 11-3 record, including a perfect 5-0 at home.

Starting in all of his appearances this season, Parquet has solidified his spot in the starting five. In Saturday afternoon’s home game against Stanford, the Buffs went in looking for their seventh straight win against the Cardinal. A win would contribute to solidifying their lead over the Cardinal in the Pac-12 rankings. The game once again showcased Parquet’s importance to the team, as he has proven time and time again that his athletic contributions are a major factor of the Buffs’ winning record, specifically on defense.

“Eli now is a solid contributor in the starting lineup who gives us really good minutes,” Boyle said after the game. “He’s really made good strides as a defender and making open shots and being efficient offensively.”

As the Buffs were up by 14 at the half, Parquet was 1-for-3 from the three-point line with a rebound and an assist. Throughout the second half, the Buffs displayed their skills at the free-throw line, making 12 of their 13 shot opportunities. With a personal 86.7% success rate, Parquet has contributed to the team’s nation-leading 84.6% free throw percentage.
Averaging 5.5 points and 27 minutes per game, Parquet’s offensive skills and contribution continue to increase with playing time. From his sophomore to junior seasons, Parquet has improved in practically every category. Even with these drastic offensive improvements in his three years in Boulder, Parquet is most well known for his defense.

He leads the team with nine blocks and is second on the team with nine steals. Parquet’s consistency in preventing the opposing offense from scoring has proven key in the Buffs’ success. He showcased these defensive skills on Saturday, putting up two blocks, but no steals, an uncommon occurrence for him. In CU’s previous game on Jan. 14. against California, however, Parquet put up a career-high three steals.

As the Buffs proved victorious by a final score of 77-64 under the leadership of Boyle, Parquet finished with six points, including two three-pointers, as well as two rebounds and an assist.

Parquet and the Buffaloes look to extend their four-game win streak on Wednesday at Washington. Tip is set for 7 p.m. MST on ESPNU.

Logan is a freshman sports journalist for the CU Independent. She is majoring in Journalism while minoring in Sports Media. You can follow her on instagram at @loganstandard or on twitter @loganalexa02.