Conservative firebrand Ann Coulter to come to campus this Wednesday 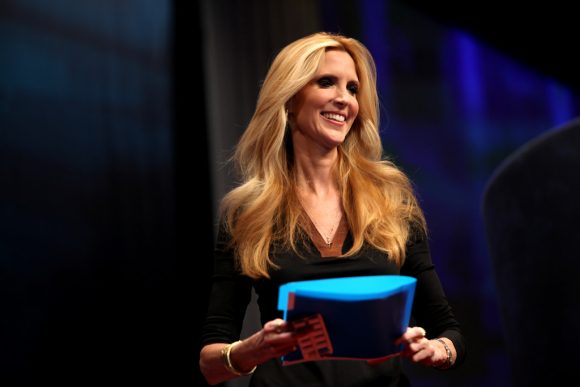 Ann Coulter will speak at CU on Wednesday, bringing with her a renewed debate over free speech and political polarization on college campuses.

Coulter, brought in by the conservative action group Turning Point USA’s CU Chapter, is known for her outspoken views on hot-button issues. She believes “we should make abortions for liberal women compulsory,” according to Coulter’s Twitter. Regarding gay marriage, it is “not a civil right,” she said during a speech. Campus liberals? Coulter is not a fan, though in a press release for the event she said that “even liberals will enjoy themselves.” But for some conservatives on campus, her event represents their one voice on a predominantly liberal campus, and a loud one at that.

Turning Point USA, a non-partisan conservative youth activist organization, is not new to the on-campus debate surrounding many issues that Coulter speaks about. Their mission is to promote conservative principles to young people through over 1,000 chapters at colleges and high schools across the country.

While Coulter may have less flair than Yiannopoulos, both represent loud voices within the conservative, pro-Trump movement.

CU’s Center for Western Civilization, Thought and Policy frequently brings conservative speakers to campus, like author Charles Murray and National Review Editor Reihan Salam. Director Robert Pasnau stated that the center is not involved in the event, adding that “we focus on sponsoring events that promote reasoned discourse.”

Mayer went on to become the chapter president of TPUSA on campus this semester. With more decision-making power at TPUSA, she helped arrange Coulter’s visit to campus.

Coulter’s appearance will cost TPUSA $23,500, according to Mayer. $3,500 of this will be paid to CUPD for security costs, the most they can charge under campus free speech policies.

$6,500 of TPUSA’s funding for the event came from campus through groups such as SOAC, Arts and Science Student Government and Representative Council. Mayer praised CU administration for their fair treatment of TPUSA and their event, describing it as “incredible.”

Conservative students have been concerned with their lack of representation on campus, according to interviews with four TPUSA members. None of them said their free speech has been stifled, as Regent Heidi Gadhal has alleged in her push for new free speech policies for the CU system, but all four are looking forward to Coulter coming to campus.

“I am hoping to bring a huge presence on campus,” said TPUSA chapter Vice President Tim Breda. For him and others in TPUSA, the event is a symbol of representing more conservative views.

Yet Coulter was not their first choice. Many TPUSA members, including Breda, were hoping to invite conservative pundit Ben Shapiro. Mayer wanted to bring Dinesh D’Souza, the conservative author and filmmaker. Others were hoping for TPUSA’s founder Charlie Kirk.

“Ann Coulter is a step in the right direction,” said sophomore TPUSA member Maddison Meeks. Meeks also wished Shapiro could have come to campus, but Coulter had a more affordable fee. (Shapiro charges $30,000 and has a contract with Young America’s Foundation.)

“[Coulter] serves as a catalyst to tell kids what is going on on campus,” said freshman TPUSA member Luis Santana.

Conservative and far-right speakers at universities have sparked protests on other campuses leading to violence and arrests, at times larger than the Yiannopoulos protests last year at CU. Coulter’s rhetoric sparked concern for many groups on campus, including the Black Student Alliance, Muslim Student Association and other organizations which represent marginalized groups that Coulter has spoken about in the past.

No student that the CUI has spoken with called for the event to be canceled, as many did for the Milo event. All are reported saying that they respect her right to speak. Still, Dadet added that “we also have a right to protest.”

Breda, Meeks and other TPUSA members endorsed students’ right to protest, saying that everyone should have free speech.

Some students are protesting by registering a number of “clearly fake” email addresses for the event according to Breda and Mayer. TPUSA has revoked 30 to 50 tickets thus far out of concern that they won’t show up, leaving empty seats in the audience.

Not all conservatives on campus are happy about Ann Coulter’s appearance. College Republicans’ Vela said Coulter coming to campus represents TPUSA’s “frat guy conservatism.” He said Coulter’s way of talking about issues is indicative of a lack of depth in TPUSA’s ideology.

“The more we divide our country through triggering [people] …the less we are actually capable of doing our jobs,” Vela said.

[…] addition to walking out, some student protesters attempted to register for the event under fake email addresses with the intent of not showing up and […]