Fear, anger and shock: The CU community responds to the capitol attack 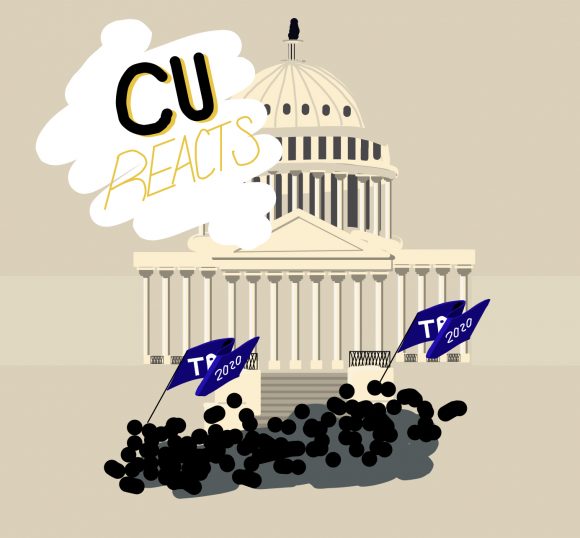 On Wednesday, Jan. 6, a pro-Trump mob marched from the White House to the Capitol building after hearing a speech from President Donald Trump. The crowd grew more hostile as they approached the center of the American legislature and proceeded to violently gain entry into the halls of Congress. For the first time since the War of 1812, insurrectionists successfully stormed the building and proceeded to ransack it, with the goal of halting the certification of electoral college ballots in a joint session of Congress.

The events, which unfolded for millions on national television, shocked the world. Many University of Colorado community members also watched the attack play out in real-time and reacted to it in a myriad of ways.

Jay Spencer, president of the University of Colorado College Democrats, said that what was going on frightened him.

“Our democracy is key to the freedoms that we enjoy, and when faith in our democracy and our institutions is eroded, we will be left with so little,” he said in a text conversation.

Similarly, Joey Fratino, president of the University of Colorado College Republicans, was also deeply affected by the attack.

Although he voted for President Trump in the 2020 election and said he would have in 2016 if he could have voted, he did not support the people who attacked the Capitol.

“I was pretty shocked when I found out what happened,” he said. “They’re trying to intimidate Congress into giving Trump a second term, which I think is completely wrong.”

Fratino also thinks that the riot will have consequences for conservative students at the university.

“It’s going to be harder for conservative students to identify themselves and speak out on campus because everyone will think they’re like these far-right extremists,” Fratino said.

Abby Presutti is a freshman journalism major at CU Boulder and closely watched what was happening throughout the day. In particular, she said she noticed that Metro Police’s treatment of this group of people was very different than that of Black Lives Matter protesters who took to the streets to protest the unfair treatment of Black people by police last summer.

“I was just in pure shock… I couldn’t believe what I was seeing, and then it just turned into anger,” she started, “there were people out there this summer that were protesting (for) Black Lives Matter and they were getting tear-gassed, being punched and arrested.”

Others were quick to notice this disparity as well. Holly Olivarez is a graduate student in the environmental studies program at CU Boulder and is one of the lead organizers of Diversify CU Now, an organization that is primarily focused on amplifying the voices of BIPOC community members at the university.

“I myself have witnessed police brutality towards Black and brown folks for simply protesting in a peaceful manner… to see the contrast of BLM protests versus today when we’re witnessing domestic terrorism is quite unsettling,” Olivarez said.

On social media, videos of police officers holding doors for rioters and helping them down the Capitol steps have gone viral, prompting many to echo the same concerns that Presutti and Olivarez express.

Olivarez is also concerned about the way the university community will be impacted, and she wants to make sure BIPOC students are able to speak out against injustice.

“On a day like today, we want our BIPOC colleagues to know that we’re here for them, we’re thinking about them and we’re going to continue to find ways to support them,” Olivarez said.

The university also has a more specific connection to the attack, however. Professor John Eastman, a visiting scholar from Chapman University. spouted conspiracy theories about the 2020 election to a crowd of marchers just hours before the attack.

Olivarez said that activists within the CU community were “very upset” that the university is still employing Eastman.

“I know for a fact that there are faculty, staff and students that are very upset that Eastman has been allowed to continue at CU after seeing his comments at this rally… CU needs to hold professors, visiting or not, accountable for participating in the violent overthrow of the government,” she said.

In response to pressure from said activists, CU Chancellor Philip DiStefano said that the university would not dismiss Eastman, because doing so would violate policy tied to the first amendment.

However, he did say that “Professor Eastman’s conduct does not reflect the values of our university. He has embarrassed our institution. CU Boulder is committed to the free exchange of ideas and the pursuit of knowledge, and Professor Eastman has contributed nothing of value to support the ideals of either the Benson Center or CU Boulder.”