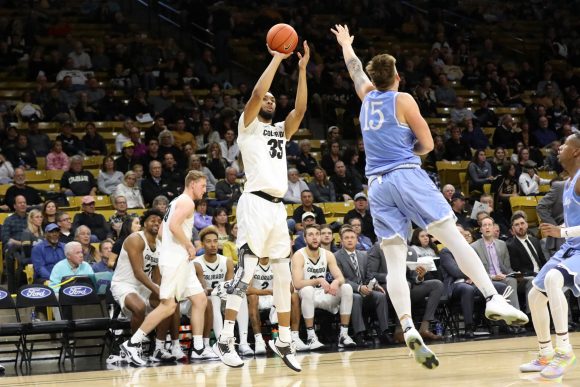 Junior forward Dallas Walton shoots the ball during the second half of play at the CU Events Center. Nov. 16, 2019 (Nigel Amstock/CU Independent)

Back in March, head coach Tad Boyle’s University of Colorado Boulder men’s basketball squad left the court in Las Vegas after an embarrassing 82-68 first-round loss in the Pac-12 Tournament against Washington State. It was the culmination of a frustrating five-game losing streak to end the season, but CU was still primed for a seat at the table in March Madness with a 20-win season under its belt.

Then, the entire world came to a stop.

Nine months following the anticlimactic end to the 2019-20 season and the continuation of the COVID pandemic, the Buffs made their triumphant return to the Nevada desert with a dominant victory over another Pac-12 foe, the Washington Huskies, at a fanless T-Mobile Arena.

One minute into the game on Sunday, senior guard McKinley Wright IV made a jumper to put CU up 4-2. For the remaining 39 minutes of the game, Colorado would proceed to fittingly stampede all over the Huskies. While Wright did not have the flashiest game on the court, the seasoned upperclassman still commanded the offense with maturity. He contributed five assists and four defensive rebounds to help the offense flow smoothly despite scoring only five points himself. At the same time, senior center Dallas Walton put on perhaps his finest performance since arriving in Boulder four years ago, finishing with a career-high 22 points, while shooting 6-for-7 from the field and 10-for-10 from the charity stripe.

“I can’t put into words how good it feels,” said Walton who is an Arvada native. “A lot of credit goes to my teammates and coaches, putting me into position to produce. It was a good game for us and we have to keep this thing going.”

Off the bench, senior forward Jeriah Horne, senior guard Maddox Daniels and freshman guard Keeshawn Barthelemy all hit double-digits in scoring. Daniels in particular impressed with his play off of the boards, reeling in a career-high seven rebounds to lead both teams.

“(I’m) just trying to bring it all together, playing hard on defense and playing relaxed and playing smart on offense and just trying to help the squad any way we can,” Daniels said. “We just want to get wins and it was great energy tonight from everybody.”

Despite the lopsided score on the board, Boyle was still not totally satisfied with the performance. “We should have held them to 20 points in that first half,” the 11-year CU head coach said. Boyle also was unhappy with the late run that his squad allowed Washington to go on to cut the lead to under 30. “On defense we let our foot off the gas in the second half,” Boyle said.

On the offensive side, Boyle had criticisms as well for the end of the game. “We got a little stagnant, we settled for the high-post jump shot a little too much,” Boyle said.

As for the dubious subject of returning to Las Vegas after the disappointing and unusual end to last season, Walton had it on his mind coming into Sunday. “I felt it right when we touched down in Vegas…it was kind of a deja vu moment,” Walton said.

Meanwhile, Boyle has definitely not been living in the past, even if it was in this last year: “One of my assistants said something to me at shootaround and I ignored him,” he said.

The Buffaloes will take the court for their second game of the Far West Classic on Tuesday at 9 p.m. MST against Grand Canyon University.