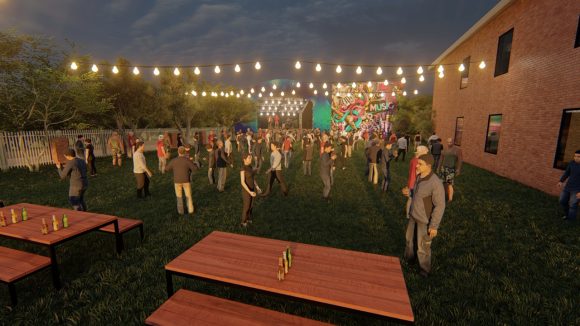 Imagine driving through the lush San Luis Valley, rugged peaks, towering sand dunes, prairie lands, hot springs and waterfalls speeding by, as the open road stretches into the horizon. A dot appears, morphing into a small town. A wooden sign reads, “Saguache,” the “gateway to the San Luis Valley.”

The town’s compact main street, filled with historic buildings, is teeming with tourists. The crisp mountain air is filled with live music and the aroma of fresh food. On the west side sits the two-story, brick Saguache hotel, which is over 100 years old. In the adjacent open space, a band plays on the outdoor stage as the audience sips craft beers, their faces illuminated by the glow of overhanging lights.

By the summer of 2022, this imagined street scene in Saguache could be a reality.

University of Colorado Boulder alum Andy Hackbarth, a classical guitarist/singer-songwriter, is currently renovating the historic Saguache Hotel, slowly turning a dilapidated seasonal antique shop into a functioning hotel and mixed-use creative venue. He hopes the renovated hotel will be a tourist draw for Saguache (pronounced “Suh-watch”), a small town of roughly 500 people, located in the San Luis Valley at the intersection of U.S. Route 285 and Highway 114, roughly 3.5 hours south of Boulder.

“People just drive through Saguache on their way to somewhere else,” Hackbarth said. “They don’t stop in and see what it’s about. I think (the hotel) will give them a reason to pull off, to spend a day or two and see what a cool town it is.”

Despite being a “tiny rural town,” Saguache already has a “really strong artist community,” according to Hackbarth. The town has several art galleries and hosts an annual arts festival to showcase local artists and crafters. The Historic Ute Theater is a mixed-use venue, which offers cinema, theater, storytelling, live music, children’s programs, workshops and cultural events. Once the Saguache hotel is renovated, “this town has the potential to be even more of an arts and music town,” Hackbarth said. 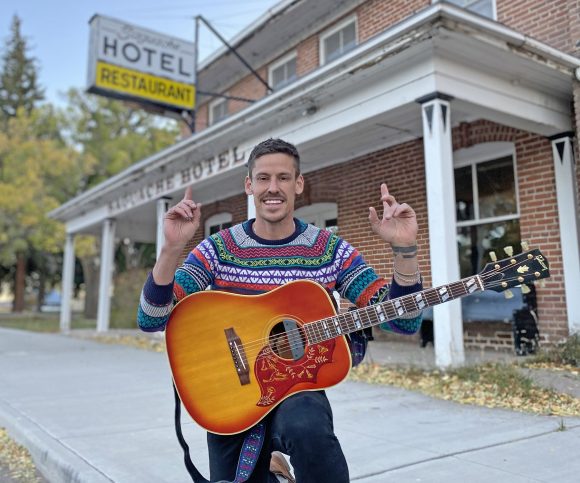 Hackbarth, who grew up in Carbondale, graduated from CU Boulder with a degree in classical guitar performance. He soon began splitting his time between Denver and Nashville.

In Nashville, Hackbarth worked odd jobs, including as a night-shift security officer at the Nashville Symphony and the Country Music Hall of Fame, while he pursued his passion of becoming a singer-songwriter.

During the winters, he began working as a cruise ship musician, performing a mix of classical guitar, cover tunes and original music. He soon would be spending nine months out of the year working on cruise ships, sailing around the world and visiting 50 countries.

When not on the open sea, Hackbarth found comfort in his side-passion: renovation.

“I really enjoy renovating,” Hackbarth said. “It was sort of like therapy for me. When you get into a house and start working, your mind wanders, and you forget about the stresses of life. It is a very satisfying type of work.”

As a self-taught renovator, Hackbarth worked on a number of real estate projects in Nashville, most notably a major renovation of Loretta Lynn’s first home, which he later operated as an Airbnb. 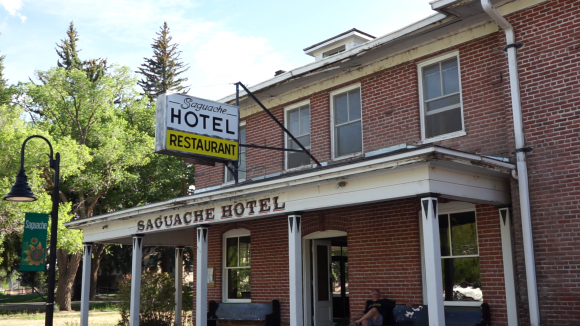 In the summer of 2019, Hackbarth returned to Colorado for a road trip with a friend from South Africa. While driving through Saguache, on the way to look at an antique cabin for sale, the Saguache hotel on Main Street “called out” to him. Hackbarth reminisced that the historic hotel was “such a cool building” and felt immediately drawn to it, despite the current state of neglect and disrepair.

In November of that same year, while on a cruise ship, he bought the hotel on a whim, selling all of his renovated Nashville properties to finance the purchase upfront. To cover the renovation costs, he is working in partnership with the non-profit Colorado Preservation Inc. to secure grants from History Colorado and the State Historical Fund and has also launched a GoFundMe campaign.

“I never planned on buying a hotel or taking on a project this big,” Hackbarth admitted. “It’s a ridiculously huge project.”

Hackbarth is not the first to attempt this daunting renovation project.

The current Saguache Hotel, which replaced an earlier historic hotel, was built in 1910 by local investors to bring in tourism. In 1935, Florence Means took over the hotel’s operation and became the first renovator, fixing up the rooms and reopening the restaurant, to create a welcoming place for the community and tourists to gather. This so-called golden age for the hotel lasted only a few years before the Means moved to Pueblo in 1938.

From then, the ownership records are vague, but apparently, it shifted hands many times, falling once again into disrepair. In 1992, the hotel closed, and it remained vacant for over two decades.

In recent years, owner Tony Hawthorne performed some renovations in 2013-2014. The next owners, Cathy Kent and Steve Stewart continued this work, ripping out all of the old carpets and setting up a seasonal antique shop in the lobby. Their plans to build a piano bar never came to fruition due to a lack of funding.

Hackbarth is the latest of many renovators, though he has far more experience and funding than his predecessors. He also has more time because COVID-19 restrictions have temporarily put his performance career on hold.  While land-locked in Colorado, he has been making significant progress with the help of his father, Charlie Hackbarth. 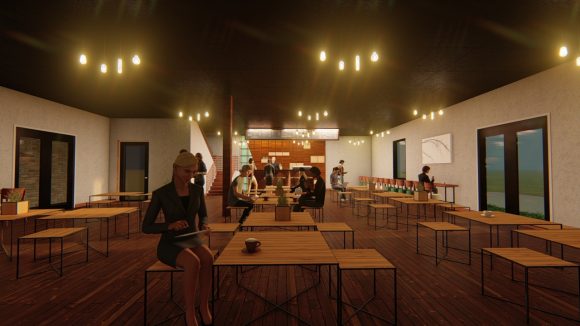 The father and son will be living in the hotel as they work, despite the lack of heating, electricity and plumbing. Hackbarth describes his lackluster living conditions as “glamping,” though he feels fortunate to finally have two extension cords, Wi-Fi and a hose hooked up to a water heater for a makeshift shower and toilet.

At times, Hackbart feels overwhelmed by the sheer amount of work to be done; however, his clear, ambitious vision keeps him motivated.

“The hotel is going to be a place where people are surrounded by beauty and creativity and history,” Hackbarth said. “(I want to) honor the tradition of the hotel, the original architecture and the vintage theme.”

Besides staying true to the 1920s theme, the renovation process will be sustainable. Hackbarth plans to reuse salvageable materials from the demolition process and to use non-toxic insulation, as well as “active and passive solar elements and masonry heaters, which will be fueled by locally sourced wood rendered from forest fires and pest damage,” according to the PR release.

For Hackbarth, the possibilities as a mixed-use creative venue are nearly endless. He envisions the hotel being used for music, theater, dance, festivals, comedy, open mics, guest speakers, yoga and meditation retreats, weddings, art galleries and more — all events that will draw tourists and promote the arts of all forms. Beyond promoting local creatives, hiring young talent from around Colorado will be a focus for Hackbarth, perhaps including music students from CU Boulder’s jazz and classical programs.

“People from the Front Range, especially Boulder, that appreciate art and music will relate to this space,” Hackbarth said.  “It is going to be a nice escape for people to come down, spend a long weekend, go to the Sand Dunes, hike a mountain and go to the hot springs. People from the city are really going to need places like this to get away.”