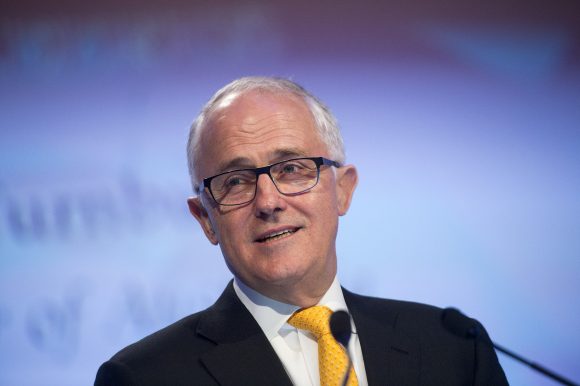 Turnbull in June 2017 (courtesy of Wikipedia).

Turnbull began by discussing the results of the recent United States election, proclaiming his endorsement of Joe Biden. He explained that his hope for Biden is that “climate change will be given the (urgent) attention that it needs.”

According to Turnbull, his relationship with President Donald Trump began in turmoil, although the two administrations eventually had constructive dealings. However, Turnbull believes that Biden will be a much better president.

“Trump’s erratic and inconsistent approach has discombobulated friendships alike,” Turnbull said, referencing Trump’s U.S. withdrawal from the Paris Climate Agreement. “America is most effective when they are articulating democratic values and doing so in a consistent way.”

Climate change and sustainability was a key focus while Turnbull held office as prime minister from 2015 until 2018. Throughout the evening, he echoed the importance of climate activism.

In Australia, climate change is more prevalent now than ever. Just last year, Turnbull said that Australia dealt with 2,000 bushfires which burned over 18 million hectares of land and incinerated more than 1 million birds, mammals and reptiles. The increasingly hotter and drier climate allowed those fires to ravage the continent.

In order to quell the problematic trend of our climate, Turnbull advocates for sustainable energy and innovation. He cites that, at this point in time, we have the means for cheap, abundant electricity with zero-emission sources.

“Innovation and courage are, more than ever, required,” he said.

Additionally, cost is now in favor of wind and solar energy, and every year they are getting cheaper. In the last eight years, the cost for those sustainable energy sources is down by 90%, Turnbull said. He also cited that new solar energy will soon be $40 per megawatt cheaper than black coal, even without a carbon price.

While in office, Turnbull spearheaded pumped hydroelectric operations in Australia, specifically the Snowy 2.0 project. According to the project’s website, Snowy 2.0 is a “nation-building renewable energy project that will provide on-demand energy and large-scale storage for many generations to come.”

However, one of the biggest challenges in implementing sustainable energy in both Australia and America is overcoming the “toxic right-wing coalition investment” in the fossil fuel industry and the culture of climate denialism which has become an identity issue in today’s political state, Turnbull said.

“What should be an issue of physics has been turned into an issue of values and identity, and hence belief,” he furthered, referencing the message of young climate activist Greta Thunberg.

During his time as Prime Minister, Turnbull planned to combat this issue by telling his colleagues that he wanted his party to be “guided by engineering and economics, not ideology and idiocy.”

Before beginning the question and answer portion of the night, Turnbull once again praised Biden.

“Leaders of countries like ours should do everything they can to unite,” Turnbull said. “That’s what Biden is promising to do, and I’m sure he will.”

The event continued with a question and answer portion, where attendees were able to submit their questions online.

When asked what ordinary people can do to combat climate change, Turnbull urged that everyone make sure climate change is important in their elected representatives. He noted that this can be done through social media, postcard, email, and in-person. He said that if politicians realize that they’re going to lose their seats based on climate, then they’ll make it a key issue.

To close the event, Turnbull left the audience with two pieces of advice. First, “leadership has to have a purpose. Power without purpose is pointless,” he said.

“History is made by those who turn up,” Turnbull concluded.