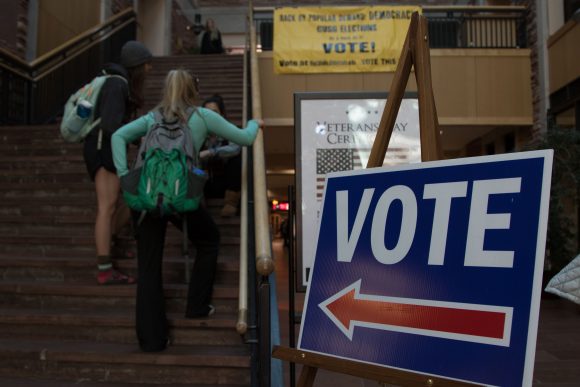 Girls stand next to a vote sign in the UMC on Election Day. (Jackson Barnett/CU Independent)

In spite of today being widely deemed “the most important U.S Election Day in modern history,” the voting centers at the University of Colorado Boulder were relatively calm. Aside from a couple of circus performers hired by the nonprofit New Era Colorado standing outside of the University Memorial Center (UMC) on stilts, there seemed to be little fanfare about the on-campus polls.

“We got so many early votes, which is really helpful to the process because it allows us to process ballots over a longer period of time,” said Boulder County Clerk and Recorder Molly Fitzpatrick.

Fitzpatrick said that county officials are choosing to see the benefits of the unusual voting procedures caused by the pandemic. While the numbers for in-person voting at CU and Boulder County at large were decidedly less than previous elections, Fitzpatrick said that mail-in votes were much greater.

The UMC voting station, which was situated on the second floor of the building, allowed students to vote in-person or drop off their ballots. Colorado’s same-day registration made it easy for both in-state and out of state students to cast their ballots. Students only needed to bring their Buff OneCard to the polls in order to register and vote all in one trip.

A fairly steady but slow stream of students made their way up to the polling place throughout the course of the day, with the busiest time beginning around 2 p.m.. Voting at the UMC opened on Oct. 19th but saw the most traffic on Election Day. There were 55 booths in total, although the number of available judges was less than that, and were open today from 7 a.m. to 7 p.m..

New Era Colorado played a big role in helping students vote on-campus. Their mission is to “engage young people across the state in democracy and help them vote” according to Michael Carter, the group’s communications manager. Representatives of the group escorted students from their table outside up to the second floor of the UMC where the voting booths were throughout the course of the day.

The peaceful scene at CU’s voting centers contrasts with the tension present around the country as many large cities board up their windows in anticipation of riots following the announcement of the election results. But even though many are becoming disenchanted with politics and dismal about the fate of the country, the turnout of young people at the polls and engagement of groups like New Era Colorado shows that they still care about participating in the democratic process.