What happens “behind the flames and the smoke,” according to “Megafire” author Michael Kodas 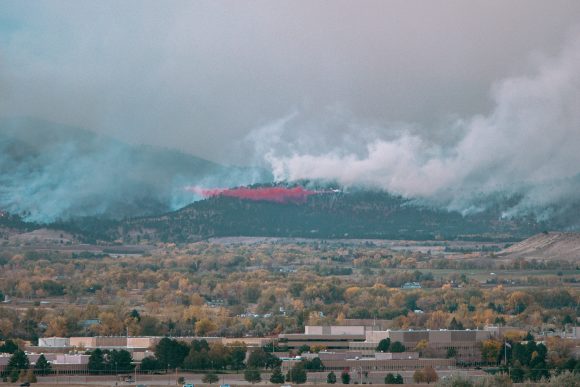 The CU Independent caught up with Michael Kodas, author of the critically acclaimed book “Megafire” and former professor at the University of Colorado Boulder, to learn about his entry into the world of wildfire reporting and to gain insight into the ever-changing nature of wildfire across the country.

With two of the largest wildfires in Colorado’s history currently raging across the state, Kodas continues to report on the driving forces behind the wildfire crisis as well as its impacts.

Kodas’ career reporting on wildfire began unwittingly to him. He tells the story of his first interaction with a wildfire as a young, eager reporter at his first job in a newsroom. With news from a police scanner of a nearby fire in his home town of Hartford, Connecticut, he rushed to the scene, camera in hand. When he arrived, only a few fences separated him from the fire as well as those attempting to subdue it, prompting him to stumble over the barricades to get a closer look.

As Kodas was aiming his lens to snap a photograph, he saw a man in uniform and badge running towards him, eventually forcing him to the ground. As he was picked up from the ground, the guard informed him that he had strayed onto the grounds of one of Connecticut’s prisons. All of the firefighters were prison inmates.

In the midst of being dragged out of the prison by the guard, the wind shifted directions, causing the fire to grow, almost swallowing one of the inmates. Kodas once again pointed his camera. 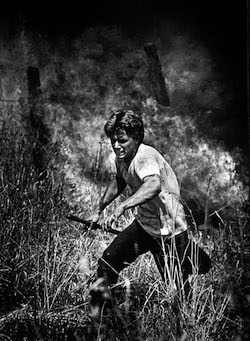 Somers, CT–A prisoner Osborn Correctional Institution in Somers, CT, runs to escape a blowup of a grassfire that he was fighting on the prison’s grounds. (Photo by Michael Kodas)

“The prison guard who I figured would just take my camera away from me or stick his hand in the lense, instead picked me up by my armpits and aimed me towards the action,” Kodas said. “And I was able to make this sequence of photos of this prison inmate running for his life.”

The following day, one of his photos were distributed nationally and was plastered across the front page of a number of newspapers.

After stumbling onto the prison’s grounds and discovering that thousands of inmates across the United States fight wildfires, largely outside the grounds of their prisons, Kodas was compelled to know more. Years later, he trained with the forest service and joined a fire fighting crew, to which he explained, “I learned that most of the really interesting things about wildfire happen behind the flames and the smoke. That it’s very political and the economics of it is really fascinating.”

After years of reporting on wildfire, Kodas categorizes the driving forces behind wildfire in “four umbrella topics”: climate, forest management, development and economics/politics.

According to Kodas, there have been strong climate signals for the fires that we’re experiencing now, with continual heat records broken as well as drought; both being strong indicators of climate change.

“What we’re seeing now in Colorado is very unusual,” he said. “It’s not that unusual to have some wildfires burn into October, but to have fires that have blown up this fast and multiple of these fires starting in October is very, very rare.”

Last year’s snowpack in Colorado was over 100%, which is above average, but due to a much hotter and drier spring than usual, Colorado only had about 50% of its normal run-off; whereas the rest of the water was evaporated or absorbed into the ground.

“The forests dried out much earlier than they normally do, and we ended up seeing some really impressive fires fairly earlier in the season and at times of year that we don’t see fires in Colorado,” Kodas explained.

The second driving force behind wildfire according to Kodas is Forest Management and its “zero tolerance” approach. Upon initial response, 98-99% of wildfires in the United States have been successfully quelled, according to the U.S. Department of Agriculture.

“In some forests — particularly, say, the Ponderosa Pines forests that we have here on the Front Range and Colorado, that are very common throughout the southwest — a lot of those forests burned really frequently with low intensity ground fires,” he explained, adding that these forests have historically burned every two to ten years, in turn, killing a lot of competing vegetation.

“If you put out every fire for a century, in a landscape that burned every five years, it’s not hard math to figure out that you’d have way more fuel in that forest… So, when a fire does get in there, it burns entirely differently than it did historically,” Kodas said, emphasizing the importance of prescribed burns.

He also added that this is not universal and that some forests only burn every 300 years.

The United States’ approach to the development of landscapes is also a large contributor to the wildfire crisis. With more than a third of houses in the United States in the wildland urban interface, meaning close to flammable landscapes, humans become primary firestarters.

“We move into a landscape and we change how fire is in that landscape,” he summarized.

The economics and politics behind the decisions made in regards to how to manage flammable landscapes and fires are also greatly contributing to the crisis.

According to Kodas, these decisions are largely based on what is economically beneficial to one group or another, particularly those involved in fighting fires as well as developers, with these decisions often have devastating consequences.

Kodas believes that there needs to be a shift in how we think about wildfire.

“We’re going to have to completely rethink how we relate to our landscape in the West with an eye towards living with wildfire rather than fighting it, because it’s not a fight we can win,” he concluded.

Kodas’ book “Megafire: The Race to Extinguish a Deadly Epidemic of Flame” is available for purchase on Amazon.