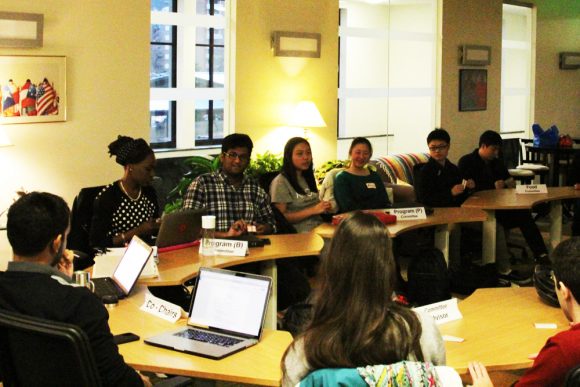 The board of the International Student & Scholars Programs had their first meeting of the year on Thursday, Jan. 15, 2015 in Boulder, Colo. The group is preparing for their annual International Festival on April 11th. (Sarah Meisel/CU Independent).

The United Campus Workers released a petition on Oct. 9 in efforts to prompt the University of Colorado to better support the international scholars on campus.

The Department of Homeland Security and the Immigration and Customs Enforcement made a proposal in July that would prohibit international students from staying in the country if their university transitioned to a solely online approach. An anonymous source, a Ph.D. candidate and member of the union, said CU was not among the 300 institutions that signed an amicus brief urging the government to take action against this proposition.

“Our university did not respond vigorously like others did,” the Ph.D. candidate said. “They took quite a few days to issue a statement that was formal and did not mean much. It was not clear to us whether they were going to take any concrete action.”

Although DHS withdrew this, a different fourth-year Ph.D. student and member of the union, who wanted to remain anonymous, explained that CU’s response in July sparked the union’s International Committee to get a message to the public. They added that it was not until another DHS proposal in September gave the committee momentum.

This more recent proposal poses new limitations on international study and research visas. Students would only have four years to complete their degree.

“They (DHS) are proposing that any change, for example if you need to take one more semester or if you need to take a semester off, you will have to go through another application processes,”  the first Ph.D. candidate said. “The university’s words would not be enough to make sure you can continue studying or working here.”

The fourth-year Ph.D. student said that CU delivered another weak response regarding the new proposal.

“The university has agreed to address the recent DHS proposal, but it really does not tell us how,” they said. “We do not know what they are sending DHS. We do not know who is making those decisions.”

President of UCW, Alex Wolf-Root, noted that the 24% decrease in enrollment for international students is discouraging.

“We are the worst in our conference, the Pac-12, with the number of international scholars on campus,” Wolf-Root said. “We have clearly failed to support our community.”

The fourth-year Ph.D. student said this is also important to note and is addressed on the petition.

The petition itself has two overall purposes. The first one is to address the most recent DHS statement.

“The window for comments expires Oct. 26, so our university needs to join other universities and other entities and need to tell us they do so,” the first Ph.D. candidate said. “We need to know what concrete steps are taken, so that we are reassured that they have international students and scholars’ best interest at heart.”

The second purpose is adding international scholars’ views and comments to the table, so it is not merely powerful administrators making decisions for other groups of people, according to Wolf-Root.

“The goal is to make CU for all of us,” he said. “Internally, we want to make sure we have decision making power and real power for all different groups.”

The fourth-year Ph.D. student explained that multicultural voices need to be added to governing boards around campus.

“A lot of people do not know our concerns, so how do we address them if there is no international person on those boards?” the source said.

They added that, for classrooms around campus to create more fruitful and rich conversations, international scholars need to be entered.

“It is a very one-sided classroom discussion,” fourth-year Ph.D. student said. “It is either Eurocentric or American-focused. Having more diverse voices in the classroom brings so much to offer as to how the university functions.”

Similarly, the first Ph.D. candidate source said international students do not have equal opportunities when it comes to education.

“Many times, we do not have access to the same funding opportunities or can take on any project off campus,” they said. “We came here knowing all of that, but it would be great if the administration acknowledged that and acknowledged the efforts not only of international students and scholars, but also faculty who rely on them to do their work in research institutes, in labs, and in classrooms.”

The first Ph.D. candidate explained that people need to participate and create a dialogue to achieve justice.

“Let’s get faculty, let’s get international students and scholars involved to give people power and agency to come up with ideas to actually make CU more attractive and more nurturing institution for international study and research,” the first Ph.D. candidate said.