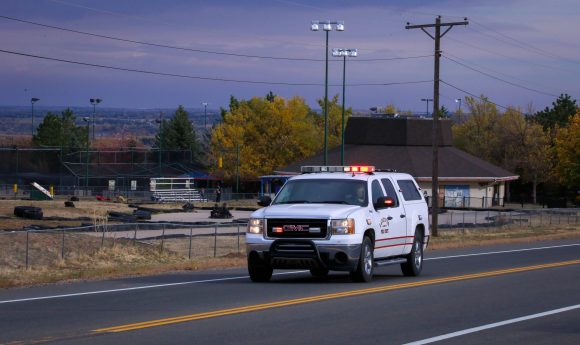 Emergency responders race down US-36 towards the Cal-Wood Fire near Jamestown. Oct. 17, 2020 (Kevin Wu/CU Independent)

Early Sunday afternoon, a wildfire was discovered in Lefthand Canyon, which currently spans over five acres of land.

The fire, which is started in the 14000 block of Lefthand Canyon Drive, was first seen at approximately 1 p.m and is now the second wildfire in Boulder County. In the few hours since it was discovered, it has forced a number of evacuations including the entire town of Ward and homes north of Ward such as Gold Hill, Spring Gulch Road and Gold Lake Road. Glendale is also under an evacuation warning.

Alerts have also been sent to some residents in Longmont and Louisville who are not close to the fire, according to an article by the Denver Post, although it noted that “those not in the immediate vicinity of the fire do not need to evacuate.”

According to the Boulder Office of Emergency Management Twitter account, the evacuation point for this fire is now at the Nederland Community Center at 750 Peak to Peak Highway, while large animals should be evacuated at the Gilpin County Fairgrounds, 230 Norton Drive.

This is a developing story and will continue to be updated.